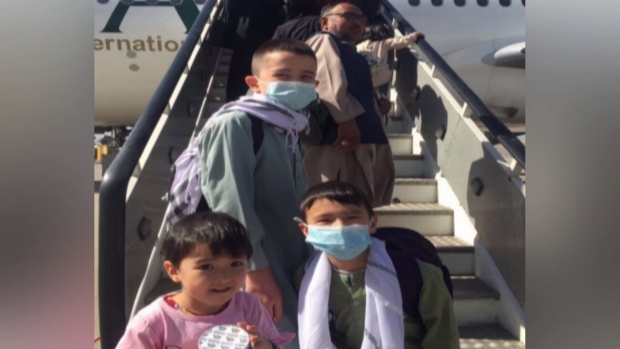 MONTREAL — An Afghan man living in hiding for months has been able to escape Afghanistan with his family and now awaits a flight to Canada.

Reza Kateb had spent time working with the Canadian embassy to promote gender equality in Afghanistan and helped implement the Afghan elections, ultimately winning an award from Canada’s ambassador to Afghanistan in 2016.

But when the Taliban took over the capital city of Kabul in late August, Kateb and his family had to flee out of fear for Taliban retribution for his involvement with Canada’s government.

“I was hiding,” Kateb told CTV News. “I was not at my house, because that was not an option for me.”

At one point during the height of chaos in Afghanistan, Kateb narrowly escaped an explosion near the Kabul airport.

“The Canadian government sent me a message to avoid the area, so we avoided, and we are alive today,” he said.

Now two months later, Kateb, his wife and his three children — aged 12, eight and four — have successfully crossed the Afghan border into Pakistan, where they now await travel into Canada.

“I want a bright future for my children,” he said. “It’s very unfortunate that over the course of four decades, I never experienced peaceful life and sustainable life in Afghanistan. So, I want to be part of a peaceful life in Canada, if it is possible.”

Kateb and his family were assisted by U.S.-based humanitarian group Afghanistan Transit Initiative and were able to leave the country thanks to the Canada-based Journalists for Human Rights (JHR), as well as a CTV News journalist.

“I cannot find words to tell them, they helped me and family and many other families and friends,” he said.

Kateb also wanted to thank “kind people around the globe” who helped bring his family to safety either through fundraising or other support measures.

Getting across the border has not been easy. Kateb said he and his family tried many times to make the proper arrangements, but each time it fell through.

Still, Kateb never gave up hope, mainly because he had what few other Afghans have to help him cross the border: a passport.

Kateb hopes to settle in Toronto once he arrives in Canada, as he has about 10 friends in the city and has already been promised a job in the area.

“They have a peaceful and satisfied life in Canada, so they encouraged me to come,” he said.

Kateb also has a long-term goal of achieving his PhD from a Canadian university.

Canada has committed to resettling 40,000 Afghans into Canada, though it’s unclear how many have since arrived. The government has previously cited privacy concerns for withholding that information.

The government has also committed $50 million to international organizations helping the Afghan people.

There are an estimated 1,700 men, women and children destined for Canada currently stuck in safe houses across Afghanistan.