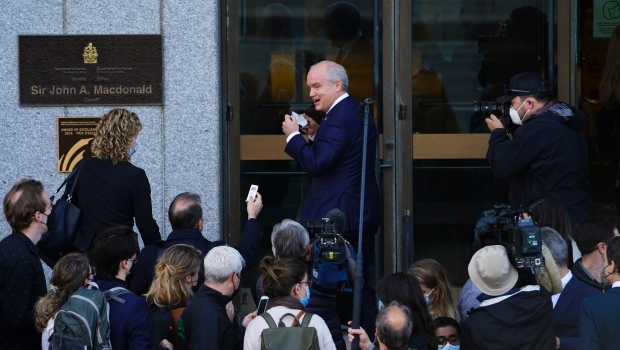 OTTAWA — Conservative Leader Erin O’Toole says he’s confident that he has enough support to stay on as leader, ahead of a key post-election meeting where he’s facing a divided caucus that is set to vote on whether MPs should give themselves the power to potentially oust him.

Asked on his way to the in-person meeting in the Sir John A. Macdonald building across the street from Parliament Hill whether he thinks he has the support needed to carry on in the party’s top job, O’Toole responded: “I’ve spoken to most of caucus, and yes I do.”

“We’re all disappointed, no one more so than me. But we have to make sure we build on the gains we have, learn from where we fell short. That’s what any team, that’s what any family does when you have a disappointment, you learn from it, you come together, and that’s what the meeting will do,” he said Tuesday.

“I’m really proud of how hard people worked. We lost some great people, and I’m responsible for that, and so we’re going to talk about what went right, what went wrong, and what we have to do.”

While O’Toole seems optimistic about his political future, not all MPs on their way in to the meeting were willing to voice their support, stating that there will be lots to talk about in what could be a lengthy caucus meeting, taking place behind closed doors.

Deciding whether to take the first step towards removing O’Toole, or at least leaving the door open to the possibility, is one of four key votes that the caucus is expected to take during today’s meeting.

Through the Reform Act— an initiative from Conservative MP Michael Chong that came into effect in 2015—caucuses are supposed to vote at their first post-election meeting on giving themselves four key internal powers they could enact for the coming Parliamentary session:

If Conservatives decide to enact the power to prompt a leadership review, 20 per cent of caucus would need to sign a formal agreement to trigger the process, and then it would require a majority of caucus to vote to remove the leader through a secret ballot process.

O’Toole has encouraged his caucus to vote in favour of enacting these powers, with Chong noting Tuesday that having that power in their back pocket doesn’t mean it’ll be used against O’Toole.

On Monday, Nova Scotia Conservative Sen. Michael MacDonald wrote to his colleagues imploring them to vote to have the power to call for a leadership review. In the lengthy letter he cited the vote counts in key regions that saw the party bleed votes to fringe parties, and O’Toole’s pivot from running in the leadership as a “true blue” Conservative to a more centrist leader.

“The strategy of moving our party to the left not only failed to attract new Conservative voters, it drove out large numbers of traditional conservative voters who no longer felt welcome in their old home,” reads an email from MacDonald to the caucus, obtained by CTV News.

“Part of the issue was that by the end of the campaign nobody knew what Erin stood for, including many card-carrying Conservatives,” MacDonald wrote. “But he has been judged by the voters and he has failed to win a winnable election. To keep trying the same strategy, even with some changes, is only going to drive more Conservatives away, and we simply cannot afford to do that.”

There has been disagreement within the party over whether O’Toole should remain at the helm since the Sept. 20 federal vote that saw the party fail to beat the Liberals and Justin Trudeau after leading in the polls for a good portion of the race.

Despite O’Toole’s promise to pick up seats across the country, the party is returning with the same number of MPs that it had before the vote, slightly down from the number of seats the party won in 2019.

O’Toole has already initiated an internal review of what went wrong during the 2021 election campaign. When he announced the review he said the party is “building towards victory next time,” signalling his intention to still be the leader when the next race is called.

“It’s a minority Parliament, sadly, very similar to the one we left and we have to be ready to run again,” he said Tuesday.

With files from CTV News’ Evan Solomon and Sarah Turnbull.