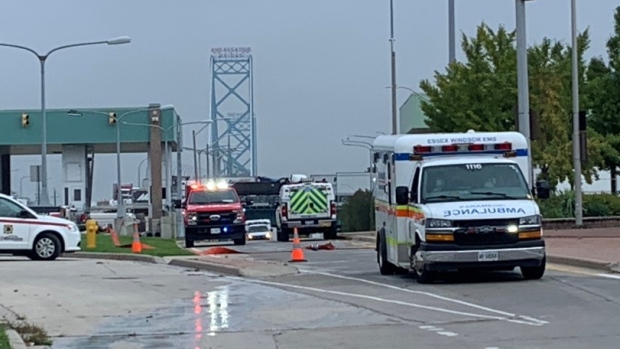 WINDSOR, ONT. — Windsor police say the Ambassador Bridge international border crossing between Canada and the U.S. was shut down for most of the day due to “possible explosives” in the area.

Police were called to the scene at the Canadian side of the crossing between Windsor, Ont., and Detroit, Mich. on Monday morning.

Police say they were alerted by the Canada Border Services Agency (CBSA) after possible explosives were located inside a vehicle in the secondary inspection area.

“No threat was associated to this and this is believed to be an isolated incident,” says a Twitter post from police. “The safety and security of staff and the public is paramount; as such traffic has been re-routed.”

Police say the driver of the involved vehicle is being detained pending further investigation and is currently in the custody of the CBSA. No other persons are believed to be involved in this incident.

Officers say the area was evacuated and the bridge was shut down to incoming traffic from the U.S.

The Ambassador Bridge Company says U.S.-bound traffic “has always been open for travelers and will continue to be open for those wishing to cross into the United States.” There is access off of Wyandotte Street West only.

An alert from the CBSA is encouraging incoming travellers to consider alternate ports of entry to cross the border.

“The CBSA recognizes border disruptions affect both travellers and industry and we are working to restore normal border operations at this port of entry as quickly as possible,” says a CBSA statement. “Thank you for your patience while we get operations back on track.”

CBSA says managment is working closely with emergency officials on both sides of the border and monitoring the situation and acting to minimize traffic disruptions.

“We won’t speculate when the crossing will re-open. We will rely on emergency and highway officials to say when it is safe to travel on and will resume operations at that time,” the statement says.

Police say they have condensed the scene which will allow for returned traffic flow from the U.S. into Canada once the port of entry is reopened by CBSA. Normal operations resumed at the bridge just before 5 p.m.

By around 7 p.m., Windsor police had cleared the scene. Further updates are expected Tuesday, police say.