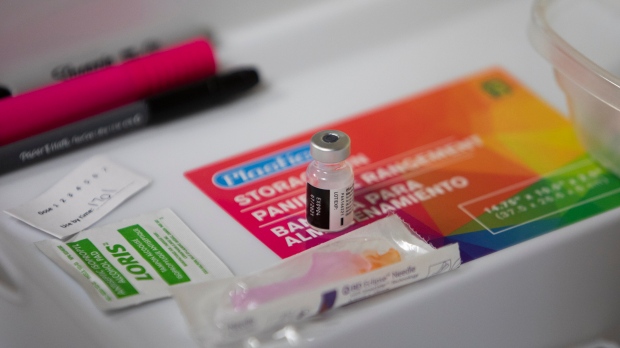 TORONTO — Saskatchewan has been battered by COVID-19’s fourth wave, struggling with a surge in cases and deaths and a health care system that is on the brink of being overwhelmed — a cautionary tale, the beginnings of which can be traced back to the summer when public health measures ceased, according to one expert.

The situation in Saskatchewan has been bleak over the last couple of months.

Saskatchewan has had more than 73,000 cases of COVID-19 since the start of the pandemic, and nearly a fifth of those cases have occurred within the last 28 days.

The province’s COVID-19 death rate from the past month is more than three times higher than the national death rate, and is currently the highest provincial death rate in the country for the fourth wave, with Alberta in second.

On Tuesday, the number of COVID-19 patients in ICUs across Saskatchewan officially surpassed the province’s usual capacity.

Nearly 340 COVID-19 patients are currently hospitalized in Saskatchewan, 75 per cent of which are not fully vaccinated. The province has one of the lowest vaccination rates in the country.

The current seven-day average for new daily cases in Saskatchewan is 465, or around 38.6 new cases per 100,000 people. Saskatchewan only has a population of around 1.17 million, meaning that this rate of cases would be equivalent to Ontario logging more than 5,600 cases a day, instead of the 500 daily case average Ontario currently has.

So how did the province get here?

According to Dr. Nazeem Muhajarine, an epidemiologist and professor with the University of Saskatchewan, Saskatchewan’s current plight can be traced to three major things: the Delta variant; the province’s low vaccination rate; and, crucially, the government’s handling of public health measures.

“Our public health restrictions disappeared or lifted almost overnight on July 11th,” he told CTVNews.ca in a phone interview. “Other provinces also lifted the restrictions, but they did it gradually, they spread it over many weeks, in fact, or a month even, for example, in B.C. Whereas in Saskatchewan we basically went overnight from having restrictions in place to almost no restrictions.”

While Saskatchewan did have three steps to their plan to end restrictions, he said the province rushed into it.

“July 11 came and we wanted to see 70 per cent of our eligible population at least with one dose in them. And we didn’t get quite there, we were just […] under one per cent lower than 70 per cent, but anyway, the government decided ‘close enough’ to 70 per cent, we are going to lift all restrictions.’”

Masks were no longer required in public spaces. There were no gathering limits, and restaurants and bars didn’t need to limit seating. Life was back to normal — or, at least, that was the plan.

Muhajarine pointed out that during the summer, we didn’t understand the Delta variant as fully as we do now.

“The studies hadn’t produced the data to show how contagious this particular Delta variant is, and almost to the point that it presents itself almost like a different virus,” he explained.

“It is so much more transmissible than even the Alpha [variant], which was twice as transmissible compared to the […] wild variant.”

In August, with no protective measures in place, the “cascade sequence” of rising cases, hospitalizations and deaths started, Muhajarine said, leaving the province to scramble for solutions.

On Sept. 10, the government made self-isolation mandatory again for those who had tested positive for COVID-19. A week later, an indoor masking mandate was announced again, followed by a proof-of-vaccination plan for restaurants, movie theatres and indoor venues, as well as government employees.

“What is missing is any restrictions for indoor gathering[s],” Muhajarine said.

Despite calls for the province to place limits on the size of gatherings, Premier Scott Moe has resisted, denying a recent request from the mayor of Saskatoon for additional public health measures.

In a statement emailed to CTV News last week, the Saskatchewan government stated that they would not be limiting gathering sizes.

“The vast majority of new cases and hospitalizations are unvaccinated residents and those who are not vaccinated should get vaccinated,” the statement said.

Only 79.1 per cent of the eligible population (those 12 years old and up) in Saskatchewan have received at least one dose of the vaccine, the lowest rate in Canada and more than five per cent behind the province with the next lowest rate, Alberta.

Muhajarine explained that Saskatchewan’s population is largely spread among smaller rural settings and towns, and that there is a divide in terms of vaccine uptake in rural communities versus urban ones.

Those in rural communities may feel that the lack of population density in their region will protect them anyway, or may have less trust in the government, he said, potentially contributing to the province’s low vaccination rate.

But focusing only on vaccination is not going to solve Saskatchewan’s problem, Muhajarine said.

“Delta had a lot of vulnerable people to infect because of the low vaccination rate and also the complete dependency on vaccines as a way to get out of this pandemic,” he explained.

“Vaccines are very important, but vaccines need to be complemented with other measures, public health measures.”

One of the big concerns about Saskatchewan right now is the toll on the health care system.

The province is relying on surge capacity — in September, anticipating the system being overwhelmed, the province moved to increase the provincial ICU capacity to 175 by adding more beds.

As of Tuesday afternoon, 114 people were in the ICU in Saskatchewan in total, including COVID-19 patients and other patients.

“We are just at the very brink of having to triage, having medical people having to decide who gets to live and who gets to not live because of the capacity issues that they have,” Muhajarine said.

“We can create extra beds, like a field hospital, et cetera, but we need to find people to staff them. We need to have specialized people, and they’re difficult to find.”

Throughout this fourth wave, Muhajarine pointed out that leadership from the government has been largely absent.

In the summer, weeks passed with no public briefings on the COVID-19 situation in the province, even as cases started to rise in August.

“I think that what is really interesting is the lack of visibility and absence of our MLAs and our caucus, you know, who is governing this province,” Muhajarine said.

In late September, Saskatchewan’s NDP, the official opposition in the province, called on the provincial government to resume weekly COVID-19 briefings, calling the lack of availability of the premier and Health Minister Paul Merriman “an unbelievable abdication of duty.”

“You would think that in a fourth wave like this, […] leading [the country] in our death rates and hospitals pushed to the brink, the Minister of Health will be appearing every day, every single day of the week,” Muhajarine said.

“But he’s nowhere to be seen.”

He believes that in order for Saskatchewan to rise out of the fourth wave, the government needs to step up.

“The government can and has to do more,” Muhajarine said. “I mean, the government needs to impose, reintroduce, some limits to gathering, particularly in public places and indoor places as well.”

He added that proof-of-vaccination should be extended to those working in schools, where there are children who can’t receive the vaccine due to their age, and that rapid testing should be used more.

When we just look at the numbers, we lose sight of the main issue here, he added: the human toll of COVID-19.

“We just had the Thanksgiving weekend, a day in the year where our families get together and gave thanks for what they have,” Muhajarine said. “We had seven, eight people, […] die of COVID on Thanksgiving weekend. And they, if not for COVID, if it had gone a different way, those people […] would probably be sitting at a table, sharing a meal with their loved ones.

“We are just only quoting numbers. We are not thinking that these are actual people.”