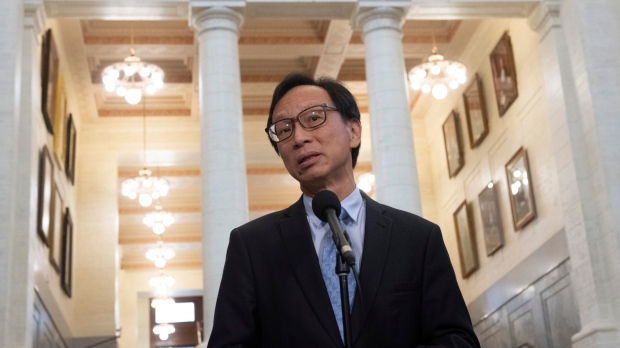 While they all faced criticism from some quarters, only one — Sen. Yuen Pau Woo, leader of the Independent Senators Group — seems to have been singled out as an alleged stooge of China’s communist regime, told to resign and “go home.”

Last week, Woo got a similar reaction when he tweeted about the release of Michael Spavor and Michael Kovrig, the two Canadians arbitrarily detained by China for nearly three years in retaliation for Canada’s arrest of Huawei executive Meng Wanzhou at the behest of the United States.

Woo tweeted that it was a “happy day” for the families of the Canadian men who became known around the world as the “two Michaels” and for Meng, who was simultaneously released and allowed to return to China. He urged Canadians to ponder the lessons learned from the affair.

He attached a link to an op-ed published in the Toronto Star that cited a former U.S. ambassador, Chas Freeman, saying that the “U.S., assisted by Canada, took Meng hostage in the first place as part of its trade-and-technology war with China.”

“By claiming Meng was ‘taken hostage’ @yuenpauwoo has violated his oath as a Canadian senator and should resign,” Alexander tweeted.

“Mouthpieces for foreign propaganda should have no place in Canada’s Parliament,” he added.

Alexander’s tweet was shared by others who variously referred to Woo as “pond scum” and a “Chinese commie f—” who should be “sent back to China along with Meng.”

China has maintained from the outset that Meng’s arrest was politically motivated. Canada and the U.S. have strenuously denied it but plenty of American and Canadian experts nevertheless share Freeman’s view that she was a political bargaining chip.

That view was fuelled by former U.S. president Donald Trump, who was attempting to negotiate a trade deal with China at the time of Meng’s arrest and who said he’d intervene in her extradition case “if I think it’s good for what will be the largest trade deal ever made.”

John Manley, a former Liberal deputy prime minister and Canadian foreign affairs minister, said at the time that Trump’s comments had “given Ms. Meng’s lawyers quite a good reason to go to the court and say, ‘This is not an extradition matter. This is actually leverage in a trade dispute and it’s got nothing to do with Canada.”‘

Woo notes that Manley and others who have echoed similar views have not been denounced as mouthpieces for China.

That’s a specific kind of opprobrium, he believes, meant to stigmatize people of Chinese descent and he’s worried about where the rising tide of anti-Asian sentiment in Canada could lead.

“I am Exhibit A, if you will, only because I have a bit of public profile,” Woo said in an interview.

“But there are many others in the community who do not have my protections and are genuinely fearful of the increasing typecasting and stigmatization that’s going on.”

Woo was actually born in Malaysia and raised in Singapore before coming to Canada at age 16.

He has been accused of being unabashedly “Beijing friendly,” a mouthpiece and lobbyist for the Communist Party of China, even though he points out he’s “three generations removed from the mainland (China).”

He fears recent immigrants from China, who still have connections to family there, are considered even more suspect and are less able to defend themselves.

Woo points to reports suggesting that Chinese Canadians might have been influenced by or acting on the behest of China when they voted in last month’s federal election, resulting in the defeat of several Conservative incumbents who had advocated a hardline stance against Beijing.

“This is really a slanderous and dangerous way of thinking because it makes assumptions about Chinese Canadians ΓÇª who have views that may not be mainstream (and) it presumes that they are not able to think for themselves,” he said.

“The accusation that they are foreign agents or stooges of the Chinese government is a very, very serious allegation and, of course, hearkens back to the days of McCarthyism when careers were ruined and lives were lost and we have to be very careful not to go back to that place.”

One of those defeated Conservative MPs, Kenny Chiu, who lost his B.C. riding to a Liberal in the Sept. 20 election, told The Canadian Press that during the campaign there were WeChat posts he says contained false information about the Conservatives and allegations a private member’s bill he tabled would discriminate against Chinese Canadians. But he also said his party could have done a better job speaking directly to members of that community.

When Woo spoke against the motion labelling China’s treatment of Uyghurs a genocide last June, he argued that Canada, given its history of forcing Indigenous children to attend residential schools, should not try to lecture China from a position of moral superiority on human rights.

Rather, he said, Canada should appeal to its Chinese “friends” not to make the same morally wrong and societally damaging mistake of trying to repress and forcibly assimilate a minority group.

Sen. Peter Harder, the former government representative in the Senate who now sits with the Progressive Senate Group, made a similar argument.

Sen. Peter Boehm, a former senior Global Affairs bureaucrat and Sherpa for prime ministers at G7 summits, argued that the motion’s “few paragraphs of what passes for megaphone diplomacy” would accomplish nothing, other than to anger China and possibly hurt attempts to win the release of Kovrig and Spavor.

Boehm, a member of the Independent Senators Group, said in an interview that both he and Harder got “a few brickbats” for their speeches, including from his former colleague, Alexander.

Alexander could not be reached for comment in time for publication.

“What I was getting was ‘You’re an experienced diplomat, you should know better, shame on you.’ That was basically what I was getting from Chris Alexander and from others who consider themselves experts,” Boehm said.

But unlike Woo, he said: “No one has tweeted or commented that I should go back to China.”

Boehm agrees with Woo that “there’s a correlation here with anti-Asian racism on the rise in Canada ΓÇª and some of this is permeating into the utterances or what various Canadians who should know better are putting on their social media feeds.

“I think it’s unfair and demeaning.”

This report by The Canadian Press was first published Oct. 3, 2021.