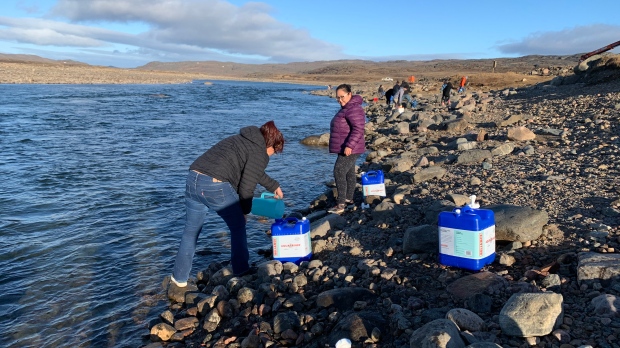 TORONTO — A developing water crisis in Nunavut’s capital city, Iqaluit, is exposing just how precarious the drinking water situation can be for the city.

On Tuesday, the city’s Department of Health declared a local state of emergency and advised residents not to drink the tap water due to the possibility of petroleum hydrocarbons in the water supply.

Iqaluit’s roughly 8,000 residents are being advised not to consume tap water for drinking or cooking until further notice, while both boiled and filtered water from the tap are not safe. Laundry, cleaning and showers are safe, provided the water isn’t swallowed while bathing, the city has said.

Iqaluit Mayor Kenny Bell told CTV’s Power Play that investigators discovered the smell of “petroleum products” in one of the containment units the city uses to store its drinking water.

“It’s too early to suggest even what it is, but if I was a betting man and the petroleum product is in there, I would suspect that it’s been damaged due to climate change,” he said.

“We had a very warm and wet summer here in Iqaluit and of course as climate change has been impacting us greatly, I would say maybe the permafrost melted and our facility may have moved.”

While the discovery of a petroleum smell is relatively new for city officials, Iqaluit residents have noticed it for more than week.

“I feel like the city should have been doing tests two weeks ago and it’s their job to keep us safe,” Katie Hughes, an Iqaluit resident, told The Canadian Press.

Water samples have been sent for testing, but it could be five business days to hear the results. While they wait, city officials are in the process of cleaning the tank and inspecting it for any leaks or cracks.

Bell said it may still be a few days before the tap water is safe to consume after its been boiled. In the meantime, the crisis has exposed just how volatile the water reserves can be for the city.

Residents are currently paying about $9 for a litre of bottled water and lining up for hours to buy it. The Canadian Press reported on Wednesday that both major grocery stores in Iqaluit — Arctic Ventures and Northmart — were sold out of both bottled water and plastic jugs.

Meanwhile, the city has tapped into the reserves at the nearby Sylvia Grinnell Territorial Park to supply its elders and people in need. Some residents have also been heading to the park to fill up on water and have been inadvertently blocking city officials from accessing it, Bell said.

“It’s a terrible situation,” he added.

“We have some of the most pristine water in the world up here, but accessing it is a challenge and the City of Iqaluit has been under a water crisis for about five years.”

Nunavut has also pledged to bring in 81,000 litres from Ottawa to help with the demand.

While Bell is hopeful this may be resolved in short order, there are plenty of long-term issues with the water supply that the city is also dealing with.

Bell said both the water reservoirs and water treatment facilities in the city are too small for Iqaluit’s population, and the piping is in need of repair.

“There’s a major issue there and obviously we have to fix it,” he said.

The city has asked the federal government for $133 million to fix the infrastructure surrounding the water supply and Bell is hopeful for a response.

“Everyone is on the same side moving forward, it’s just obviously scary,” he said.

With files from CTVNews.ca Writer Nicole Bogart and The Canadian Press