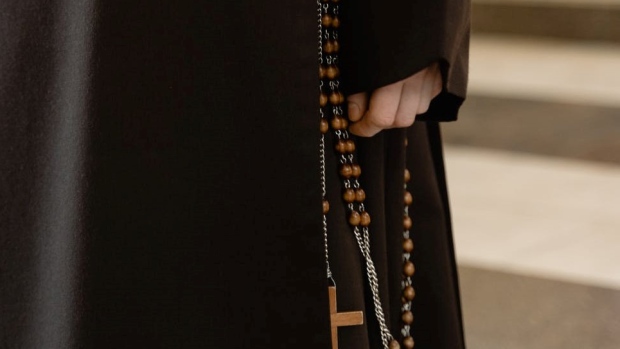 MONTREAL — A group of women has been gathering outside a Catholic church in the Kanien’kehá:ka (Mohawk) community of Kahnawake, near Montreal, every Sunday for months.

They want the remains of a certain priest to be exhumed from where he’s buried, on church grounds, and moved — to anywhere outside of their community.

That’s because the priest sexually abused local children, they say.

It was hearing about other graves across the country, one woman said — the unmarked graves of Indigenous children — that prompted them to speak out about this one that is so public, and an unwelcome presence to many.

“It brought me back to my own trauma,” said Patricia Kaniente Stacey.

“How Father Lajoie violated me, not once but many times. I was an innocent child. He was a priest.”

The priest, Father Léon Lajoie, has been buried on the grounds of Saint-Francois-Xavier church since 1999.

Aside from the unmarked graves, recent relevations from others in Kahnawake also spurred the group to come together, Stacey said.

For her, the abuse started when she was 10 years old, she said.

The women in the group say they’ve heard from 20 community members now making similar allegations, but they say most are afraid to speak publicly.

When the priest died in 1999, some women protested the decision to bury him there, she said, especially since some people from Kahnawake didn’t have the same right in death.

“At the same time there [were] women from here who were being denied the right to be buried here, so that made it even more controversial,” Montour-Lazare said.

In late August, the group met with the Mohawk Council and with representatives from the Jesuit order.

In a statement this week, the Jesuits said they are “grateful” to those who brought the accusations to their attention and that they’re taking these accusations seriously.

They’re are in the process of meeting with the people involved, individually, they said, but also recognize that the gravesite issue may need to be resolved before the accusations can be properly investigated.

“We […] remain open to all possible solutions that would result in healing and reconciliation,” the Jesuits said.

“It appears that a meaningful investigation of the complaints may be impossible without this issue being resolved.”

They also said they’ve done a search of church documents to begin investigating the case but will follow a bigger process laid out by their order for investigating complaints of abuse.

“The Jesuits have conducted a thorough search of the archival records pertaining to Fr. Lajoie. We found no correspondence that contained complaints of boundary violations or abuse during his long career as a Jesuit priest,” they said.

The final decision on the gravesite doesn’t, in fact, lie with the church — it appears to lie with the Mohawk Council of Kahnawa:ke.

The protesters say the question has seen little action since the council’s August meeting.

Grand Chief Kahsennehawe Sky-Deer told CTV it’s a sensitive issue in the community and that finding a resolution should not be rushed.

She says council is starting a consultation process with members of the community.

But Montour-Lazare says she believes it’s political and always has been.

“The church is playing power politics,” she said.

“Between the church and the band council being the lawful authority here, with what goes on, it’s just disgusting and it never stopped.”

Stacey says that reliving her trauma is difficult, especially because some in the community don’t believe her.

But she plans to keep up the protest for as long as it takes.