Forty per cent of post-secondary students in Canada are food insecure. Schools—and other students—are finding solutions.

It’s commonplace for post-secondary students to survive off a substandard diet of ramen noodles, boxed macaroni and cheese, and other affordable staples that are cheap, filling and quick to prepare. After tuition, rent and other expenses are settled, a student’s remaining budget for food can be scant, or even none. Food—for some university students in Canada—is an afterthought.

This problem among post-secondary students reflects what’s happening in the whole of society. Food insecurity is positioned as one of Canada’s major health issues for its direct association with chronic health diseases and poor mental health. In May 2020, Statistics Canada reported that approximately one in seven Canadians encountered inadequate access to food because of financial constraints during the pandemic—the highest number recorded to date. And university students are more susceptible to hunger than the general population. Research conducted on campuses across the country have found that approximately 40 per cent of post-secondary students in Canada are food insecure.

“We’re consistently seeing that, whether it’s campuses in large urban centres, in university towns, in more rural areas, Atlantic provinces, central Canada or Western Canada, there are fairly consistent results that make [campus food insecurity] hard to ignore,” says Sam Laban, who develops and manages programs at the Guelph Lab, a joint initiative with the City of Guelph and the University of Guelph’s College of Social and Applied Human Sciences, to address challenges faced within the community.

RELATED: The grassroots food insecurity initiatives putting an end to the ‘starving student’

Universities play a much larger role than providing education, Laban says. A growing body of research indicates immediate action on campus food insecurity is imperative to students’ well-being and academic success. “For many [students], the university is the educator, employer, landlord, restaurant, cafe and kitchen,” Laban says. “It’s a remarkable number of touchpoints.”

Poor academic performance is just one of the ripple effects that many food-insecure students reportedly encounter. Studies have shown individuals who are food insecure experience insidious effects on their mental and physical health. Students who are severely food insecure—a term used to describe someone who skips one or more meals per day—accounted for 11 per cent of students at the University of Guelph, according to a 2020 report.

“It’s not unheard of for students, if they don’t have any money left, to drink some water [in place of dinner] and go to bed,” says Suman Roy, executive director of Meal Exchange, a youth-driven charity that collaborates on food security initiatives with over 40 universities and colleges across Canada. “This is not only a health problem, it is about education,” says Roy. “The main goal for a university is to make sure they give proper education to students, but if [universities] are not giving [students] the tools—like nutritious food—to do so, how are [students] expected to achieve that?”

Roy says research by Meal Exchange and university campuses has shown that international students are significantly more vulnerable than domestic students to being food insecure. Through tuition fees and living expenses, foreign students contribute approximately $22 billion annually to Canada’s economy—close in amount to Canada’s forestry sector. But despite the significant positive value international education brings to Canada’s economy, Roy says universities and governments “do the least to take care of them.”

“In various cities and small towns, the economy runs during September to April because [of international students],” says Roy. “They are coming here and spending so much more money [than domestic students], and when there is a chance to help them we say it’s not our problem.”

Data also continues to indicate marginalized students—such as students of colour, students with disabilities or adverse abilities, students with dependent children or families, and LGBTQ+ students—are disproportionately at risk of experiencing food insecurity. Sara Kozicky, a registered dietitian and food security project manager at the University of British Columbia, says research conducted on campuses reflects the broad inequities that exist within society. 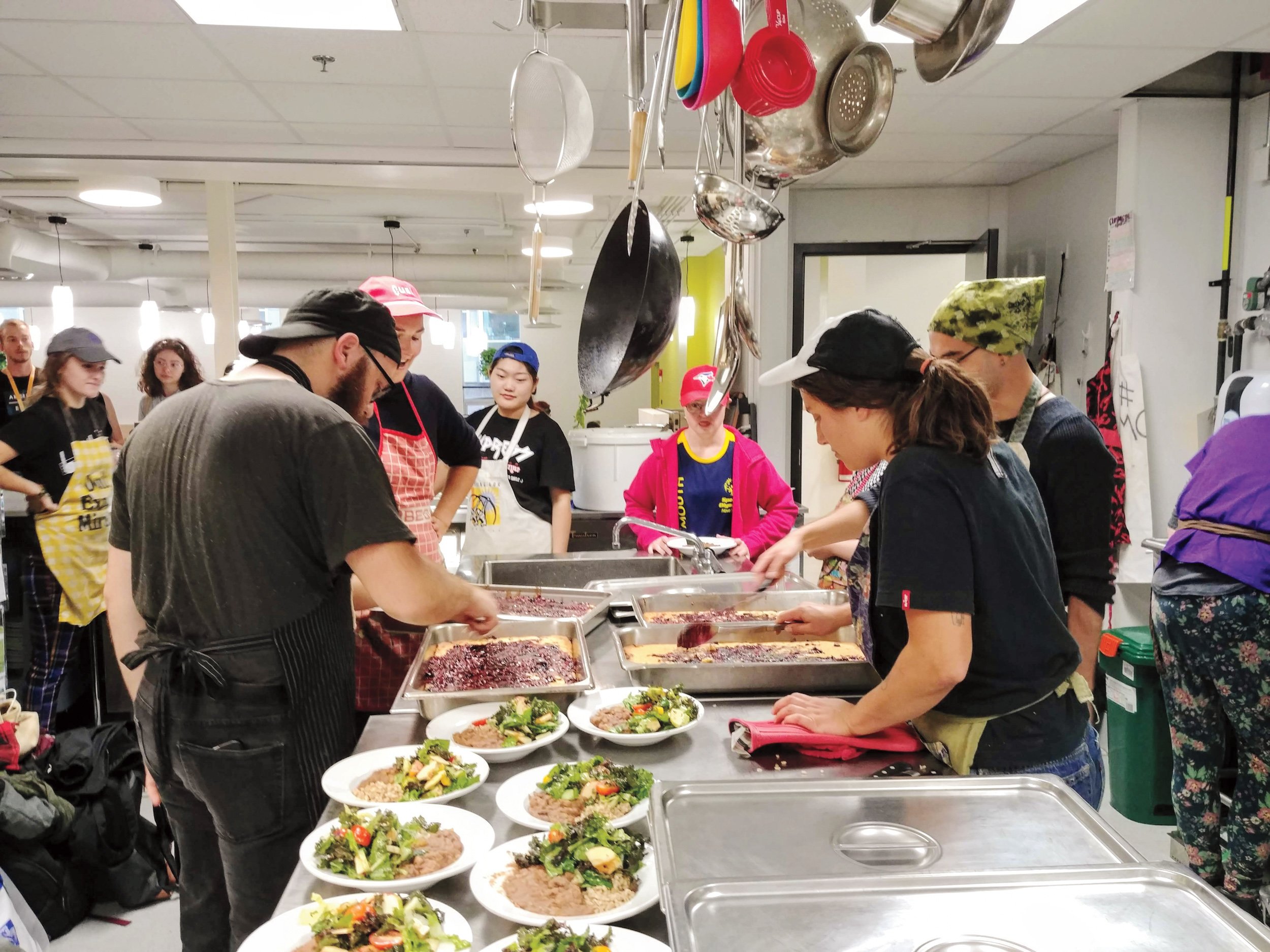 Students have long advocated for universities to address affordability and food insecurity, says Kozicky. The first food banks on university campuses (thought to have opened in the early ’90s) and prepared-meal initiatives in Canada were established by students who saw an urgent community need and wanted access to sustainable, local and ethically sourced food. “[Students] have led low-cost community meal programs, and most student societies on campuses run the food bank or the food pantry. Historically on campuses, it’s been students supporting students,” says Kozicky.

Today, every university in Canada has a food bank on campus. And with research findings and survey results indicating food insecurity is pernicious, campuses are taking action.

The University of British Columbia—where rates of campus food insecurity are three to four times higher among students than among the general population in the province—has piloted robust solutions, which include a whole campus strategy to address food insecurity, including outlets that provide low-cost meals, investments in student-led food insecurity initiatives and a proposal for a campus food hub that would provide programs and services to improve food security on campus.

READ: What happens to sexual assault reports at Canadian universities? No one really knows.

“We’re in a real transition where the institution is leaning in more, thinking about what their roles and responsibilities are and how [they can] address these issues that impact student well-being,” says Kozicky.

While many schools have come up with creative programs to address food insecurity, it’s well understood by both universities and students that only so much can be accomplished on campus. Suggested solutions correspond to those recommended to address food insecurity among the general population; the similarity indicates that policy changes at the provincial and federal levels are vital.

“There are ways this can be done,” says Roy, who speaks to members of Parliament about student food insecurity. “We just need to have the will to make it happen.”

Nathan Sing writes about food security and hunger issues in Canada. His one-year position at Maclean’s is funded by the Maple Leaf Centre for Action on Food Security, in partnership with Community Food Centres Canada. Email tips and suggestions to nathan.sing@macleans.ca.

This article appears in print in the 2022 University Rankings issue of Maclean’s magazine with the headline, “Putting an end to the ‘starving student.’”