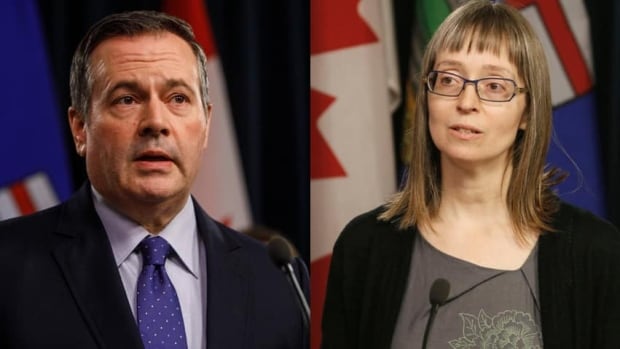 Anti-vaccination protests and all other demonstrations outside hospitals will be banned in a move to make Alberta health-care facilities safer for staff, patients and families, Premier Jason Kenney said Tuesday.

No new restrictions to prevent the spread of COVID-19 were announced, despite recent calls from medical professionals to enact “fire-breaker” measures to protect the struggling health-care system.

Kenney said the province was still monitoring the impact of new public health measures that went into effect eight days ago, adding that unvaccinated Albertans who are currently filling up hospitals beds would be unlikely to comply with any new measures.

“It is a paradox and there’s no easy solution to it,” he said.

Instead, the Critical Infrastructure Defence Act has been amended to ensure that health-care facilities are subject to the same legal protection as railways, highways and pipelines, carrying punishments for trespassing, interfering with operations and construction or causing damage.

The measure is in response to protests two weeks ago across the country by anti-vaccination groups, Kenney said.

“Recently, Albertans watched anti-vaccine protesters stand in front of our hospitals, hurling mistruths and misinformation about our health-care system, our doctors and our nurses,” he said.

“People were rightly shocked to see this totally inappropriate behaviour from a vocal minority.”

Kenney and Justice Minister Kaycee Madu reiterated that the intention was not to interfere with any individual’s constitutional right to lawfully protest.

Alberta’s chief medical officer of health, Dr. Deena Hinshaw, said there were 1,246 new cases discovered among 11,100 tests conducted in the previous 24 hours, for a positivity rate of 11.5 per cent.

There were 1,100 people in hospital, including 263 in intensive care. Another 18 deaths were reported, bringing the total to 2,663.

Hinshaw noted that over the past 120 days, people who aren’t fully vaccinated represented 80 per cent of people hospitalized with COVID-19 and 91 per cent of those in the ICU.

“These numbers speak for themselves: vaccines are critically important,” she said.

The health-care system is at a breaking point as Alberta Health Services scrambles to create more intensive care capacity in hospitals across the province.

“The only reason that we have any beds available is because AHS has added 197 surge spaces — more than double the number that we maintain as normal baseline of ICU beds in Alberta outside of this COVID time.”

The province is set to launch a new advertising campaign aimed at providing education about COVID-19 vaccines and debunk common myths, Kenney said.

That will include a direct informational pamphlet as well as radio, digital and billboard advertisements, he said.

Specific advertising is being aimed at demographics with a slower uptake, including rural regions and Albertans in their 20s and 30s.

Kenney said pharmacies and AHS will reach out to Albertans who have received a first dose but have not yet received a second.