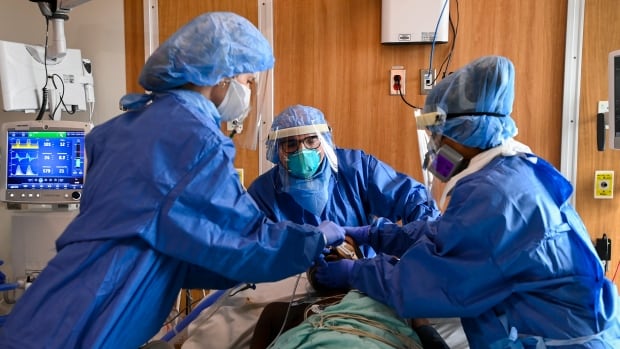 49:37Nursing the system back to health

On this week’s show: A mother shares her frustration over her son’s life-changing surgery being cancelled due to rising COVID-19 hospitalizations. MPs offer their thoughts on Quebec’s proposed health tax on unvaccinated people. A Montreal ER nurse reveals the burnout felt by frontline hospital workers, and two former health ministers discuss how to relieve pressure on Canada’s health care system. Plus — two pollsters examine the public mood in Ontario and Quebec ahead of this year’s provincial elections. 49:37

With hospitals still straining under the burden of new COVID-19 cases, countless surgeries have been cancelled and delayed, leading to growing public frustration.

Corina Heppner’s five-year-old son has been awaiting life-changing surgery — a procedure that has been cancelled. She tells The House why she supports the idea of taxing the unvaccinated to reduce pressure on hospitals.

That idea — a tax on those who choose not to get the vaccine — was first floated by Quebec’s government. It has further intensified the carrot-versus-stick argument over how best to encourage vaccination. But is it a good idea?

How can this country fix a health care system under pressure?

What can provincial and federal leaders do to ease pressure on Canada’s health care system, now and in the future?

19:29How can this country fix a health care system under pressure?

A Montreal ER nurse shares some of the stress on the hospital frontlines, and former health ministers Jane Philpott and Fred Horne talk about how to reform Canada’s health care system. 19:29

Will premiers pay the price in the polls?

With elections looming later this year in Ontario and Quebec, new polls out this week show Premiers Doug Ford and Francois Legault may face a more disgruntled public as the pandemic stretches on.

Host Chris Hall speaks to two pollsters — president of the Angus Reid Institute Shachi Kurl and executive vice-president of Leger Christian Bourque — about the current public mood and what it could mean for upcoming provincial elections.

8:56Will premiers pay the price in the polls?

Pollsters Shachi Kurl and Christian Bourque talk about the public mood in Ontario and Quebec ahead of this year’s provincial elections. 8:56