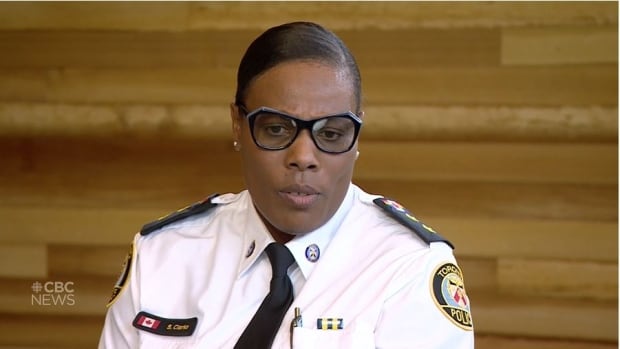 A high-ranking Toronto police officer has been suspended over allegations of impropriety surrounding a recent promotions process, CBC News has learned.

Sources with knowledge of the situation say Supt. Stacy Clarke leaked information to candidates about questions they might face during their interviews. CBC Toronto is withholding the sources’ names at their request as they’re not authorized to speak publicly about the case.

At least four officers allegedly received texts from Clarke on days they were scheduled to be interviewed for promotions, the sources say. Those questions were then shared with two other officers.

Clarke was interviewed by the force’s professional standards unit this week, sources say, adding that she has been suspended with pay and is being investigated for possible Police Act charges.

Allison Sparkes, corporate communications director for Toronto police, confirmed to CBC News that the service is investigating allegations of impropriety in a recent promotions process, but did not say who was involved.

“If the matter were to proceed to tribunal, it would be made public in that process,” Sparkes wrote in an email to CBC News.

“Should criminal charges arise, those would also be made public by the service. As of now, it is an ongoing investigation and we are unable to add anything further at this time.”

The Toronto Police Association, which represents the service’s more than 7,400 employees, said it is aware of an internal investigation surrounding allegations of misconduct in the recent sergeant’s promotions process.

“As this is an active investigation, we cannot provide a comment but we have been in touch with the Toronto Police Service. We expect a full and impartial investigation,” the association’s president, Jon Reid, wrote in an email to CBC News.

Meanwhile, a high-ranking officer with the Toronto Police Service has been charged with impaired driving after a crash in Pickering, Ont., on Thursday evening.

Supt. Riyaz Hussein, who leads the force’s disciplinary hearings office, is now facing charges of impaired driving, careless driving and having open liquor in a vehicle, Toronto police confirmed in a news release.

Sources have told CBC News that Hussein was driving an unmarked police vehicle, which had been assigned to him.

He has been suspended with pay and is scheduled to appear in court in Oshawa, Ont., on Feb. 10.