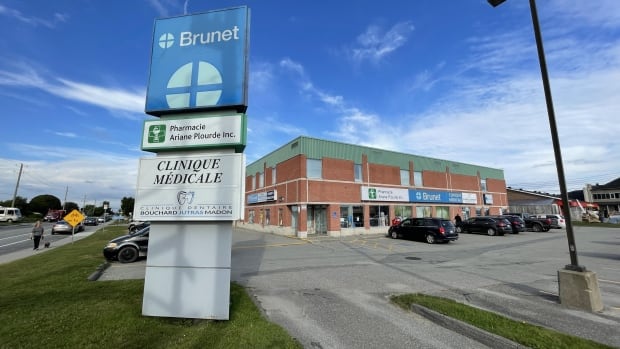 Police in Sherbrooke, Que., are looking for a man they say assaulted a nurse after he walked into a pharmacy and accused her of giving his wife a COVID-19 vaccine dose without his permission.

The attack allegedly happened on Monday morning, at the Brunet pharmacy located near the corner of 12th Avenue North and du 24-Juin Street.

“[Once there], the man quickly accuses the nurse of vaccinating his wife without [his] consent and then hits her several times to the face,” said Martin Carrier, a spokesperson for Sherbrooke police.

Carrier says the man then ran away. The nurse, a woman in her 40s, was treated in hospital for injuries to her face and a possible concussion. She’s now recovering at home.

According to police, the suspect is between 30 and 45 years old, has a medium build and is six feet tall. He has short dark hair, dark eyes and large eyebrows.

At the time of the incident, he was wearing a dark shirt, jeans and earrings. He also had a tattoo on his hand resembling a cross.

Police do not have a photo or a video of the suspect.

‘We don’t need the family approval’

Benoit Morin, president of an association that represents pharmacists who are owners, says he’s never heard of anything like this happening before.

“I was very, very surprised to hear that,” he said.

Morin says people have handed out pamphlets against the vaccination outside of pharmacies administering the COVID-19 shot, but that’s usually been the extent of the tension.

He says this situation was entirely uncalled for.

“When we have discussions with customers, I mean it’s one-on-one with the patient. We don’t need the family approval, so I don’t know what happened, or where this thing comes from.”

If similar situations begin to arise, Morin says pharmacists will have to rethink the way they work — and the need for security.

“We need to work, patients need to be secure.”

The Jean Coutu Group Inc., which now owns Brunet pharmacies, declined an interview request due to the ongoing investigation, but the company called the alleged assault unacceptable.

“We obviously condemn this gesture, which we deem unacceptable to the pharmacy teams who have been providing essential services since the start of the pandemic,” the group said in an emailed statement.

In a tweet, Quebec’s order of nurses said there’s zero tolerance for this kind of behaviour toward a health-care professional and wished the nurse a full recovery.

COVID-19 vaccinations at the pharmacy have been suspended until further notice since there is only one nurse working there.

The pharmacy’s owner declined an interview request, but told Radio-Canada that an average of about 15 people get vaccinated there every day.

Anyone with information regarding this incident is asked to call police at 1-800-771-1800.