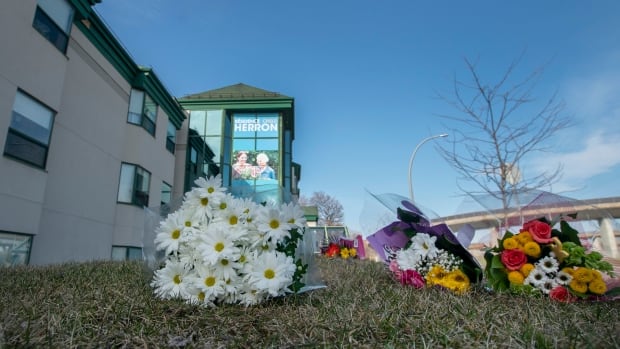 The owner of the Herron nursing home in Montreal’s West Island where 47 people died in the spring of 2020 says it was “chaos” at the facility in late March, as she frantically tried to find more staff.

Samantha Chowieri testified Wednesday at the coroner’s inquest into the privately run home in Dorval, Que., where residents were left without adequate food and water for days at the height of the pandemic crisis.

In an emotional and at times tearful testimony, Chowieri acknowledged there were staffing problems in the months prior.

But she said the situation suddenly became untenable after Friday, March 27, the date of the first confirmed case of COVID-19 at Herron.

Chowieri said she called officials at the local health authority, the CIUSSS de l’Ouest-de-l’Île-de-Montréal, the following day for assistance and was told they wouldn’t be able to help until Monday.

When she returned on the morning of Sunday, March 29, Chowieri said many of the staff who were supposed to be on shift had left.

She said a nurse told her staff had gone home sick, and were in isolation based on advice from the province’s 811 health information hotline.

Chowieri testified she was surprised when officials with the health authority assumed trusteeship of the home later that day.

Owner says she wanted to co-operate

The inquest had heard earlier from witnesses who said conditions were slow to improve in early April and that the health authority didn’t have full access to the residents’ medical records.

But Chowieri rejected the suggestion she didn’t co-operate.

She said the health authority had access to the building, except for a storage space to which she didn’t immediately have the keys.

At one point, Chowieri reflected on whether she could have done more during the crisis.

“I don’t know,” she said, then apologized to the families listening to the testimony.

Chowieri said she continued to work at the home until April 10, even though the health authority had taken over. She said there was confusion over who was in charge during this period.

Coroner Géhane Kamel, who is presiding over the inquest, asked Chowieri if she felt the home had adequate support from the health authority in preparing for the pandemic.

She likened the efforts of Chowieri and her staff to novice firefighters trying to put out a massive blaze.

The previous witness, Andrei Stanica, the manager at the now-shuttered nursing home, said Herron struggled to find staff after many were lured to the public system with better pay in January 2020.

He said hiring inexperienced staff from temp agencies, as well as the inability to find a new director of care to help run the facility, contributed to the chaotic period that began in late March. Stanica himself fell ill with COVID at that time.

Chowieri is the final witness at the three-week inquest. Her testimony will resume on Thursday.