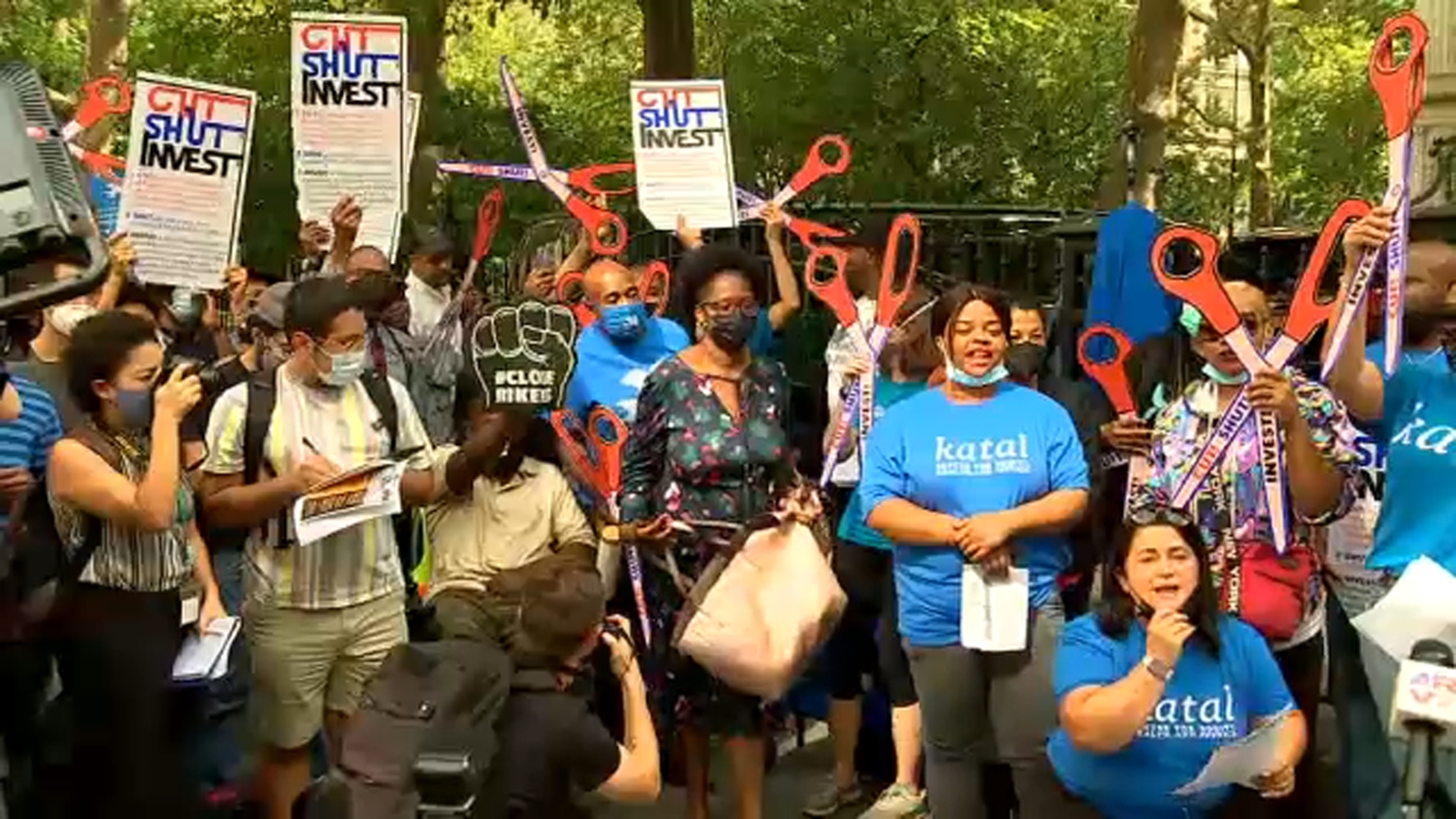 The protest comes one day after New York Attorney General Letitia James toured the jail complex along with the district attorneys from the Bronx, Brooklyn and Queens.

She says she was “deeply disturbed” by what she saw.

“I visited Rikers Island with District Attorneys (Darcel) Clark, (Melinda) Katz, and (Eric) Gonzalez, and I was deeply disturbed by what we saw,” she said. “For years, Rikers has been plagued by dysfunction, neglect, and violence, and it’s clear we’ve reached a breaking point. These conditions have led to an unprecedented and devastating number of deaths, and action is desperately needed. I am examining all of my office’s legal options to immediately address this dire situation.”

James says her office is examining legal options to address the controversial jail.

Separately, four members of Congress from New York demanded the release of inmates and closure of Rikers after another inmate was reported dead at the facility.

The demand followed the 11th death reported at Rikers Island this year. The city’s Department of Correction said an inmate died Sunday at the jail after reporting he did not feel well and was taken to the infirmary.

His death came on the heels of both Hochul and de Blasio announcing plans to try to improve conditions at Rikers Island, where longstanding troubles were exacerbated amid the pandemic.

The jail has failed to provide inmates with basic services and protection against the spread of COVID-19, the members said, and lawmakers on a recent visit to the facility found conditions that were “life-threatening and horrific,” the House members said in their letter.

Earlier, de Blasio announced that 100 NYPD police officers will relieve correction officers currently working in the city’s courts, who will then be used to address the staffing shortage.

The staff will be assigned to the Eric M. Taylor Center at the jail to speed up intake, which the mayor said should take no more than 24 hours.

Mayor de Blasio also announced that the city is suing the Correction Officers’ Benevolent Association, the union that represents correction officers, blaming it for the unsafe conditions at Rikers.

The city’s is demanding that the union stop condoning any mass absenteeism, work stoppages, or slowdowns.

The number of correction officers taking absences without leave has gone up more than 215% in the last two years.

“We are going to end the triple shifts in October and we are going to accent the positive, rewarding the vast majority of officers who have done the right thing,” he said.

The mayor said those officers will be receiving bonuses.

The bill, which takes effect next March, removes minor infractions made by parolees as reasons to be put back behind bars, such as being late for an appointment or missing a curfew.
De Blasio said only those inmates who don’t “pose an immediate threat” will be released, and in some cases, the city will have to go back through courts to get them out.

“Governor Hochul has my utmost thanks for prioritizing the signing of this critical legislation, which marks a huge step forward in ending the era of mass incarceration, and its cousin, ‘mass supervision,'” he said. “Eliminating non-criminal, technical parole violations is the decent, humane thing to do and it will only increase public safety by disrupting the incarceration cycle at a critical point, when people are reintegrating into the community. I also wholeheartedly thank the governor for using her discretionary power to implement facets of the bill that we can benefit from immediately without waiting until March.”

Republicans in Albany, however, were quick to speak out against it.

“Albany Democrats today quadrupled down on their pro-criminal, anti-victim, and anti-law enforcement policies by ordering the blanket release of hundreds of criminals with their “less is more” law,” Senate GOP leader Rob Ortt said. “Under One-Party Rule, violent crime has been on the rise across the state. It began with Democrats’ so-called “bail reform” in 2019 – and it will undoubtedly become worse with this new law signed today. Aside from the fact that New York will once again favor criminals over victims, perhaps the most frightening element is that this law was actually written in-part by a convicted killer. By signing this bill into law, Albany Democrats are saying “less is more” means less criminals behind bars, and more victims as a result.”

The city is hiring 600 new officers this fall but the union says they have lost that many officers due to resignations and retirements over the past few months.