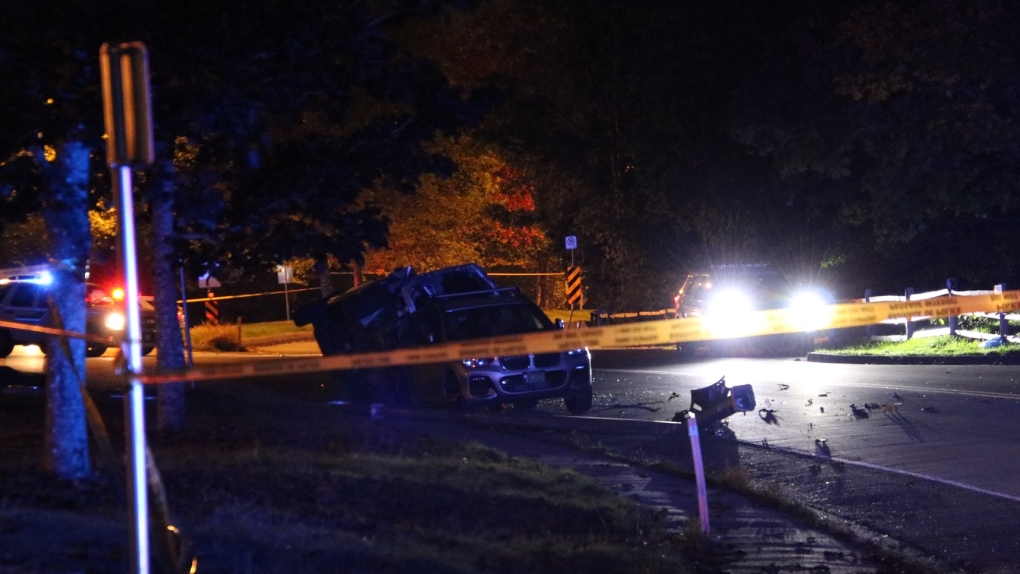 The crash, which included one vehicle, happened on Northwest Marine Drive near Stadium Road around 1:45 a.m., and led to road closures, according to University RCMP’s Cpl. Ian Sim.

“The Vancouver Fire Department and Emergency Health Services were on scene and the two pedestrians were pronounced deceased at the scene,” Sim said in a statement.

Both of the people killed are confirmed to have been UBC students.

“Through preliminary scene analysis it was determined that the driver of the vehicle veered off the side of the road and hit an 18-year-old male and an 18-year-old female walking on the sidewalk,” the statement continues.

The driver of the vehicle, a 21-year-old male, was arrested at the scene, Sim said, and taken to a nearby hospital for minor injuries. He was later released, and will appear in court at a later date.

RCMP say speed, alcohol and drug impairment have not been ruled out as factors and they continue to investigate.

The crash occurred near the Totem Park student residence building, where some students were woken up by the commotion.

”(I heard) a very loud noise yesterday night,” recalled Yuze Do, a first-year student. “I don’t know what happened. It was just very loud.”

UBC president Santa Ono spoke to the tragedy of the incident in a statement released on Sunday.

“It is difficult to comprehend and express the enormity of the loss of these two bright and promising young adults,” the statement reads.

“On behalf of the university, I wish to extend our deepest and heartfelt condolences to their families, friends and loved ones. Our community mourns with you.”

Ono did not explicitly say whether the two students were living in residence, but said that those living in the university’s student housing are likely feeling shaken as they learn of the news.

“I know some at UBC, particularly students in residence, are just now learning of this terrible incident,” Ono’s statement reads.

“I want you to know there are grief and trauma counselling supports available to you.”

Cpl. Dave Noon, a forensic collision reconstructionist with the Lower Mainland Integrated Collision Analysis and Reconstruction Service confirmed that members of the specialty unit were on scene, in a tweet around 6 a.m.

“(The collision analysis unit) is on scene at Southwest Marine Drive and Stadium Road, near the University of British Columbia for a serious overnight crash,” he said in a tweet.

The road had reopened to traffic by 3 p.m. Sunday.

Both police and the university say they will not be releasing the names of the students.