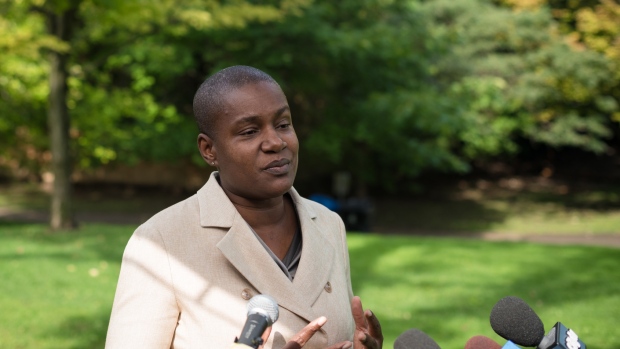 OTTAWA — Annamie Paul is resigning. The embattled Green Party leader announced Monday that she’s started the process of withdrawing from the role, calling her less than a year at the helm of the party “the worst period” in her life.

Paul’s decision to step down comes on the heels of the party initiating a review of her leadership given the results of last Monday’s federal election.

Paul said that when the review of her leadership launched this past weekend, she asked herself whether she had it in her to continue in the job knowing she’d be facing an uphill battle.

“I just don’t have the heart for it,” she said. “I just will not spend any more time focused on political games as opposed to public policy, which is what I entered politics for in the first place, particularly at a time when it is so needed.”

Paul did not take any questions from reporters after making the announcement.

In the 2021 federal vote, Paul failed to win a seat, or grow the Greens’ seat count in the House of Commons.

Moreover, the Greens saw a significant drop in their share of the popular vote, after only managing to put a Green candidate on the ballot in 252 of the 338 ridings.

Party bylaws stipulate that because Paul did not become prime minister, she would have to face a leadership review within six months. Voting in that process was set to begin Oct. 26 and end on Nov. 25, according to the Green Party. Now, the Greens will likely be looking to name a new interim leader before launching their second leadership race since the 2019 federal election.

“There is a struggle that is going on for the soul of the party,” Paul said to Green Party members as they head into this new chapter. And to her detractors? Paul said that while they may take “small comfort” in seeing her go: “You will not succeed in the end, and I will look to those other people to take up the baton and to move the party in the direction that I still believe that it can go in.”

After spending the majority of the federal election campaigning in her home riding of Toronto Centre, Paul placed a distant fourth. It was her third time running, and losing, in that riding.

In an interview with CTV National News ahead of the federal vote, Paul defended her choice to run in what historically has been a Liberal stronghold, saying that there wasn’t another so-called safe Green seat waiting for her.

Incumbent Green MP Paul Manly lost in a tight race in Nanaimo-Ladysmith, B.C., despite Victoria being one of the few regions Paul visited in the final days of the campaign.

On Monday, Paul said she has no regrets, but she knew going into the campaign that it was going to be “very hard” to convince Canadians to vote Green given she did not have adequate funding or staff, and was under “the threat of a court process,” from her party.

A leadership review nearly took place in June, as part of a bout of intra-party politicking that also included an attempt to strip Paul of her Green membership.

The rift between Paul and some outgoing Green Party governing body officials included concerns over the Greens’ financial standing, and the handling of the defection of former Green MP Jenica Atwin to the Liberals over a difference of position on the Israeli-Palestinian conflict. Paul fought ardently against claims made about her leadership style, suggesting they were based in racism and sexism.

This all saw Paul under intense scrutiny in the months leading up to the election and left her on shaky ground heading into the vote, which prompted some candidates to ask that she not come campaign in their ridings.

When she became leader in October 2020, Paul made history as the first Jewish woman and first Black woman to be elected leader of a major political party in Canada. Her pitch to voters in the 2021 vote was to “be daring.”

Shortly after Paul’s announcement, her counterparts in other federal parties reacted to the news on social media, thanking her for her time and leadership.

“Thank you…. For your resilience and perseverance. You made it possible for an entire generation of Canadians to see themselves reflected in politics. On behalf of so many Canadians, thank you,” tweeted NDP Leader Jagmeet Singh.

“Thank you… for your perseverance & for being a trailblazer for Canadians from all backgrounds interested in public service. I always appreciated our discussions and admire your tenacity. Wishing you and your family well,” tweeted Conservative Leader Erin O’Toole.

And, People’s Party Leader Maxime Bernier—who also failed to win a seat last Monday—tweeted that while he “completely” disagrees with her views, he respects Paul.

“She is a nice and decent person… She was viciously attacked by extremists in her party. I wish her good luck in her next endeavours,” Bernier posted.