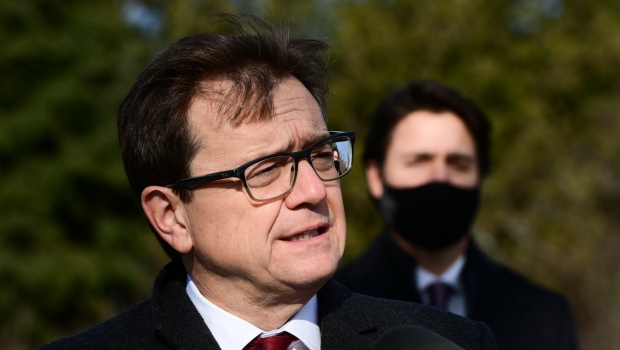 The Canadian environment minister is in Italy this week for the final set-up talks to establish the agenda for the 2021 United Nations climate conference in Scotland next month, known as COP26.

The talks include a deadline for countries that signed onto the Paris climate agreement to show more ambitious plans to cut greenhouse gas emissions, with time running out to slow climate change before it becomes irreversible.

But it’s equally critical to have the funds to actually implement those plans.

More than 10 years ago, the wealthiest nations agreed to collectively raise US$100 billion a year in climate financing by 2020 so developing countries could afford to both adapt to and mitigate against climate change.

The OECD reported last month that developed countries were US$20 billion short of the $100 billion goal. Wilkinson and Germany’s state secretary for the environment, Jochen Flasbarth, agreed in July to lead a charge to close that gap before the COP26 talks start.

Wilkinson said Friday that Flasbarth initially described the task as “mission impossible.” But after the two spent the better part of the last two days in Milan in nearly a dozen bilateral meetings with some of the world’s wealthiest nations, Wilkinson said there has been movement.

“I would say that we have made a lot of progress and certainly Germany and Canada are working very hard to ensure that we can and we will deliver on the $100-billion commitment,” he said during a telephone news conference from Milan on Friday afternoon.

He later confirmed that while no new promises of cash had been announced so far, he has been given assurances from a number of countries that there will be new commitments coming.

Some of the gap had already been closed before the latest push.

At the G7 leaders’ summit in June, Canada promised to double its funding, to about CDN$1 billion a year for the next five years and Germany committed to bump its annual contribution up one-third by 2025, to more than US$7 billion.

Last month United States President Joe Biden said he would double the American contribution to $11.4 billion by 2024. The U.S. had cancelled much of its climate financing under former president Donald Trump, who had also withdrawn the U.S. from the Paris agreement.

Wilkinson said having the U.S. back in Paris has made “an enormous difference” already, and the American financial commitment is “critical for us to be able to achieve that $100-billion goal.”

Eddy Perez, international climate diplomacy manager at the Climate Action Network Canada, said the task Canada and Germany agreed to is a ‘huge hot potato” that could ultimately make or break the negotiations to push the world to do more, faster to slow climate change.

Wilkinson and Flasbarth intend to publish a report documenting what has been promised and how to get the rest, by the third week of October.

“It is not yet certain that they will be able to put forward a plan that is going to be credible enough,” Perez said in an interview with The Canadian Press.

The environment and climate ministers from Costa Rica and Grenada said in an op-ed published in July that hitting the promised climate financing targets are the only way countries like theirs would have “a fair shot at a resilient future.”

The money itself is only one part of the puzzle. The type of financing provided is also critical. Oxfam last year said 80 per cent of climate financing from wealthy governments was in the form of loans instead of grants.

Other studies have shown there is eagerness to fund climate mitigation projects like clean energy, that can bring a return on investment, and less interest in funding infrastructure projects to help poorer countries protect themselves from the impact of the already changing climate. Those projects are typically the most expensive with no clear return on investment.

This report by The Canadian Press was first published Oct. 1, 2021.