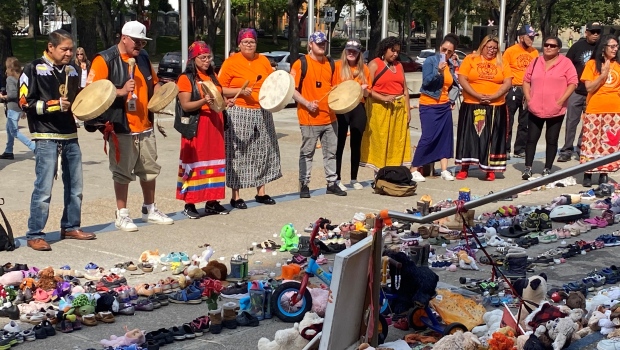 TORONTO — Canada’s bishops on Monday pledged $30 million to support Indigenous reconciliation projects for residential school survivors, their families and their communities across the country.

The Canadian Conference of Catholic Bishops (CCCB) said in a news release that they are looking to dole out the money within five years, funding initiatives at the local level. Parishes across Canada are encouraged to participate and amplify the effort.

Raymond Poisson, president of the CCCB, hopes the funds will be used to support meaningful projects and make a difference to those who experience ongoing trauma caused by the residential school system.

“There was universal consensus that Catholic entities needed to do more in a tangible way to address the suffering experienced in Canada’s residential schools,” he said in the statement. “Comprised of local diocesan initiatives, this effort will help support programs and initiatives dedicated to improving the lives of residential school survivors and their communities, ensuring resources needed to assist in the path of healing.”

Funding for projects will be determined in consultation with First Nations, Metis and Inuit populations in each region.

“The ongoing conversations with local leadership will be instrumental in discerning the programs that are most deserving of support,” CCCB Vice-President William McGrattan said. “There is no single step that can eliminate the pain felt by residential school survivors, but by listening, seeking relationships, and working collaboratively where we are able, we hope to learn how to walk together in a new path of hope.”

The CCCB issued an apology on Friday acknowledging the horrors that occurred in residential schools it ran for the federal government for more than a century.

This isn’t the first time the church has pledged money to support residential school survivors. As part of the Indian Residential Schools Settlement Agreement back in 2005, the church initially agreed to raise $25 million for survivors. In the end, however, less than $4 million was paid out.

There were 139 residential schools in the federally funded program, which operated in Canada between the late 19th century and 1996. The Catholic Church operated many of the institutions.

Thousands of the 150,000 First Nations, Metis and Inuit children who attended these schools died with some estimates placing the number of deaths as high as 15,000. Hundreds of unmarked graves were found at the sites of several former residential schools earlier this year; in some cases the number of children buried at the sites is believed to be significantly higher than any official death toll.

This announcement comes days before the National Day for Truth and Reconciliation, which will be marked for the first time on Sept. 30.