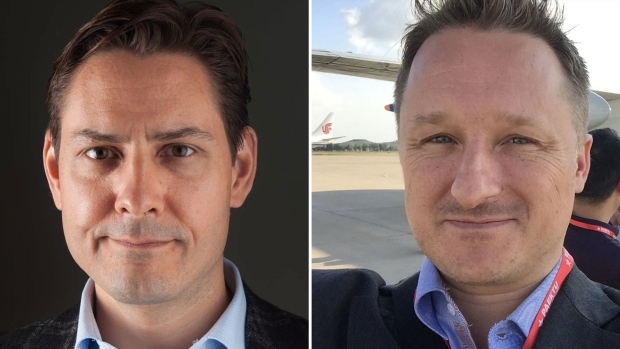 Speaking during a press conference late Friday night, Trudeau said Kovrig and Spavor boarded a plane in China at about 7:30 p.m. EDT with Canada’s Ambassador to China Dominic Barton. He said the plane has since left Chinese airspace and “they’re on the way home.”

“These two men have gone through an unbelievably difficult ordeal. For the past 1,000 days they have shown strife, perseverance, resilience, and grace — and we are all inspired by that,” Trudeau said.

“I want to thank their families who’ve been there for them, supporting them in every way they could, and supporting in the work we’ve done to secure their release,” he added.

Trudeau also thanked the “countless” Canadian diplomatic officials who have “tirelessly” worked over the past two and a half years to secure the release of Kovrig and Spavor, as well as the country’s allies who “stood steadfast in solidarity with Canada.”

“Finally, I want to thank Canadians who have kept them in our thoughts and remain determined in the core value that Canadians have of standing up for each other and looking out for each other,” Trudeau said. “These two men have been through an unbelievably difficult situation, but it is inspiring, and it is good news for all of us that they are on their way home to their families.”

The two Canadians have been in Chinese custody for 1,019 days on espionage charges that were largely viewed as a retaliatory response to Canada’s arrest of Huawei executive Meng Wanzhou on a U.S. warrant related to the company’s business dealings in Iran. However, China’s has consistently denied that the cases were in any way connected.

Both of the Canadians stood trial in China, and Spavor had been handed down an 11-year sentence, while Kovrig had yet to be sentenced before their release.

Earlier on Friday, a B.C. judge discharged the extradition matter against Meng after U.S. Justice Department officials reached a deal to resolve the criminal charges against her, allowing Meng, who has been at the centre of a years-long major geopolitical case, to enter into a deferred prosecution agreement and leave Canada, under certain terms.

Associate Chief Justice Heather Holmes signed the order of discharge in Meng’s extradition case on Friday afternoon, allowing her to leave the country and ending the nearly three-year legal saga.

CTV News confirmed that Meng checked in at Vancouver International Airport and departed on a flight to China Friday evening.

Holmes thanked Meng for her behaviour during the hearing and released her from bail conditions.

Speaking outside the courthouse to reporters, Meng thanked Holmes for her “fairness” during the proceedings, as well as her lawyers, family and friends for helping her through this “tough time.”

“I also appreciate the Crown for their professionalism, and the Canadian government for upholding the rule of law,” Meng said. “I’m also grateful to the Canadian people and media friends for your tolerance. Sorry for the inconvenience caused.”

Over the past nearly three years, Meng said her life has been “turned upside down.”

“It was a disruptive time for me as a mother, a wife, and a company executive. But it really was an invaluable experience in my life. I will never forget all the good wishes I’ve received from people around the world. As the saying goes, the greater the difficulty, the greater the growth,” Meng said.

The discharge of the extradition matter comes after the Chinese telecom giant CFO appeared virtually in a New York courtroom Friday morning and pled “not guilty” to all charges and a U.S. judge signed off on a deferred prosecution agreement.

The judge allowed the release of Meng on a personal recognizance bond, with the charges against her set to be dismissed pending good behaviour, as of Dec. 1, 2022, four years to the day when she was taken into custody at Vancouver International Airport in 2018.

Following the ruling in B.C., Canada’s Department of Justice issued a statement confirming that the U.S. had dropped its extradition request.

The Department of Justice said “Canada is a rule of law country” and that Meng was “afforded a fair process before the courts in accordance with Canadian law.”

Acting Assistant Attorney General for the Justice Department’s National Security Division Mark J. Lesko said in a statement that the U.S. is “enormously grateful” to Canada’s Department of Justice for its “dedicated work on this extradition and for its steadfast adherence to the rule of law.”

Meng’s lawyer said in a statement following the decision in the U.S. that he was “very pleased” with the deal reached.

“We fully expect the indictment will be dismissed with prejudice after fourteen months. Now, she will be free to return home to be with her family,” said William W. Taylor, III.

Canadian officials acting on the U.S. request to detained Meng inflamed diplomatic tensions between Canada and China in 2018, and over the years relations have been considerably strained, resulting in a series of trade actions, and a rallying of international allies in condemnation of China’s bucking of international rule of law.

Prime Minister Justin Trudeau had previously shot down suggestions that Canada should consider exchanging the two Canadians for Meng, citing the need for the matter to work its way through the legal system.

This came after a spokesman for the Chinese foreign ministry suggested in 2020 that Canada halting its attempt to extradite Meng could affect the fates of Kovrig and Spavor, a departure from China’s consistent denials that the cases were related.