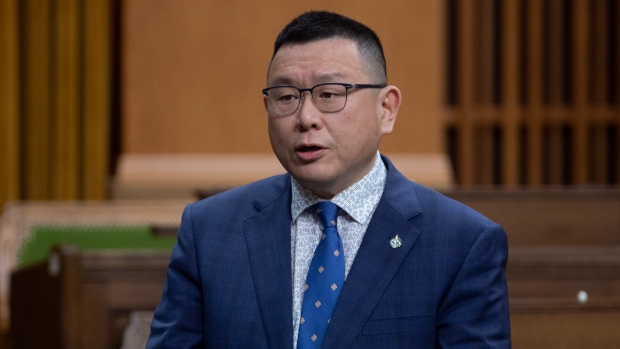 OTTAWA — A former Conservative MP who lost his seat in the recent election thinks the party could have done a better job speaking directly to Chinese Canadians.

Kenny Chiu was defeated in Steveston-Richmond East, a British Columbia riding with many residents of Chinese descent.

The party also saw the losses of longtime Conservative MP Alice Wong in Richmond Centre and Bob Saroya in Markham-Unionville, both home to many voters with Chinese roots. Neither responded to requests for comment from The Canadian Press.

The defeats have the Conservatives wondering what happened, and what connection the losses might have to the party’s stance and messaging on China.

Conservative Leader Erin O’Toole has been an outspoken critic of China’s human rights abuses, calling on the Liberal government to adopt a tougher approach with the authoritarian regime.

Chiu says there’s no single reason for his loss, but points to online WeChat posts he says contained false information about the Conservatives and allegations a private member’s bill to create a foreign influence registry would discriminate against Chinese Canadians.

“Hindsight is always 20/20. I think there could be more proactive communication directly addressing Canadians of Chinese descent that we could have done,” Chiu said in an interview.

The party could have bought more targeted advertisements, he said, adding it’s clear the communication efforts weren’t enough to counter what he considers misinformation.

Improving how Conservatives speak to constituents is one of the issues Chiu said he had hoped to raise heading into the next session of Parliament. Another was how to reassure people that their criticism of the potential influence of the Chinese Communist Party doesn’t mean they are attacking China, a country with a rich and storied history, or its people.

Cheuk Kwan, the past chair of the Toronto Association of Democracy in China and the activist organization’s current spokesman, says he has seen examples of what he calls “pro-China” messages being spread on WhatsApp. He believes Chiu was indeed subject of a misinformation campaign stemming from his private member’s bill.

O’Toole hasn’t addressed the issue specifically, but expressed general disappointment in last week’s election results, promising that what went wrong will be examined in a post-election review. Details have yet to be provided on its parameters or who will lead it.

Besides failing to grow the party in key areas like the Greater Toronto Area, including the vote-rich 905 area code, and Metro Vancouver, home to many immigrants and new Canadians, the Conservatives have five fewer elected people of colour because of defeats in and around these two cities, as well as in Calgary.

That comes as a hit to O’Toole’s pledge to expand the party and make it a place more Canadians, including people of all backgrounds, call home.

During the campaign he tried courting voters by telling them Conservatives were no longer their dad’s or grandfather’s party, despite having a predominantly white caucus.

For Tenzin Khangsar, who worked for Jason Kenney when the Alberta premier served as immigration minister under former Conservative prime minister Stephen Harper, success in making inroads with newcomer communities came down to doing the work to have an authentic presence there before any election was called.

Under Harper, Kenney prioritized aggressive outreach with diaspora communities, noting that Canada’s demographics had changed, creating an opportunity to open the door to new supporters.

Kenney was a key supporter of O’Toole’s when he ran for the party leadership in 2020, with O’Toole crediting his former colleague for having helped grow the party when he served in Harper’s cabinet.

More recently, Conservative MPs including Alberta’s Tim Uppal have apologized for not speaking out when he was in Harper’s government against its efforts to ban face coverings during citizenship ceremonies and its 2015 election promise to set up a so-called “barbaric cultural practices” hotline.

This report by The Canadian Press was first published Sept. 27, 2021.