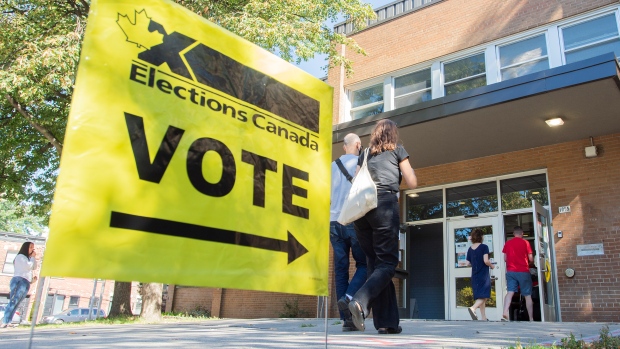 OTTAWA — After 36 days of parties campaigning for their votes, Canadians have spent the day making their voices heard, heading to the polls across 338 ridings to elect their next member of Parliament and ultimately determining who will form the next federal government at a pivotal time in the pandemic.

Polls have started to close in Atlantic Canada. In total across the region there are 32 seats up for grabs. Going into this election the Liberals held 27 seats in Atlantic Canada, the Conservatives held four seats, and the NDP held one.

A party needs to win at least 170 seats to form a majority government. Heading into this race the Liberals held 155 seats, the Conservatives held 119 seats, the Bloc Quebecois held 32 seats, the NDP held 24 seats, the Green Party held two seats, there were five Independent MPs, and one vacancy.

Will Liberal Leader Justin Trudeau’s pandemic election gamble pay off? Or, will voters agree with Conservative Leader Erin O’Toole’s pitch that now is the time for change?

Will Bloc Quebecois Leader Yves-Francois Blanchet be able to maintain third-party standing in the House of Commons? Will the NDP, led by Jagmeet Singh, be able to pick up seats? Will Green Party Leader Annamie Paul win her riding? And, will the People’s Party of Canada’s uptick in support translate to seats, or just enough to split the vote on the right?

In a federal election like no other given COVID-19’s continued spread and active national conversation about mandating vaccinations, the outcome of this vote will inform how the next governing party proceeds in the fight against the virus and building a path towards addressing other key issues that arose on the campaign trail: housing affordability, childcare, and economic growth.

Because of COVID-19 public health restrictions, how Canadians are voting has changed in some ways from past elections. Nearly one million people voted by special mail-in ballots, and another 5.8 million took part in the four days of advance polls held earlier this month, an increase of 18.5 per cent compared to the 2019 election and a 57 per cent increase from the 2015 election.

The tens of millions making their choice in-person today have been doing so while being asked to abide by certain COVID-19 protocols like physical distancing, sanitization, and masking regulations. This has resulted in longer lines than usual to get in to some polling places.

Polling stations are open for 12 hours with the window of hours depending on which province you are in, with the last polls set to close in British Columbia at 7 p.m. PST.

Right off the bat the campaign— the shortest possible election period under federal law— looked and felt different than any past election, because of the pandemic.

Travel itineraries were more pared-down, the main three travelling leaders’ tours used rapid tests daily in addition to requiring all aboard their busses or planes to be fully vaccinated, and instead of nightly jam-packed indoor rallies, virtual or outdoor events with elbow-bumps and masked selfies largely became the new norm.

There were three national debates, including one in English and one in French put on by a debates’ commission; parties pushed out their platforms and the costing of them at different times; candidate controversies hit every party; and campaigns sought to leverage social media and traditional television advertising to promote their leader and offer contrast to their opponents.

Now it’s Canadians’ turn and depending on how close key races may be, it’s expected that most ridings can be called by the end of the night. Though, it could take days to complete the counting of local mail-in ballots, meaning the final vote tallies won’t be known until Tuesday at the earliest.

When Trudeau called this election on a sunny Sunday morning in mid August, he set up his re-election bid as a chance for Canadians to have their voices heard about who they want to lead the country out of the COVID-19 crisis, and into a new era of considerable change.

You’ve heard him say it: The pandemic exposed many of society’s shortcomings. And the Liberal leader went to the polls in hopes of being given the opportunity to wrap up some unfinished business on climate change, Indigenous reconciliation, and the ‘she-cession,’ and consequently cement some legacy-making policy without having to compromise to secure the backing other parties.

Quickly, his strategy was to make the ballot question about vaccine mandates, the handling of the COVID-19 health and economic crises, and what values should shape the future.

After a bumpy few weeks pre-labour day where anti-vaccine protestors became increasingly aggressive and Canadians appeared to be looking more seriously at change and questioning why the election was called at all, the difference in approach between the Liberals and their main opponent on vaccines was brought back to centre stage on the final days on the campaign.

Though, it appears some of his opponents’ attempts to frame Trudeau as self-interested or power-hungry to the point of putting major policies like childcare on the line, stuck in voters’ minds, with polls suggesting the Liberals may not be in the majority territory that appeared within reach had the election been called earlier this summer.

If the gamble of calling this election results in either a Liberal loss, or another potentially weaker minority Liberal-led Parliament, questions have been raised about Trudeau’s political future. Though, according to Scott Reid, the former senior adviser to Liberal prime minister Paul Martin, it won’t impact his viability to remain the leader of his party.

“This is Justin Trudeau’s party,” he said on Sunday’s episode of CTV’s Question Period. “Obviously his brand has taken a hit, six years of incumbency.”

O’Toole kicked off this election campaign with virtual-only events in Ottawa, a pattern that he repeated a few times a week throughout the last 36 days. Opting to travel less and connect more virtually with thousands Canadians was a strategy that differed from the other leaders and was dissected by political observers, though the true efficacy may become known by the time all votes are counted.

Positioning himself as “the man with the plan” on day two when he debuted “Canada’s recovery plan,” O’Toole leaned heavily on his policy book throughout the race. Running as a more moderate or progressive leader than he presented himself to be during his 2020 leadership race resulted in continuing questions about the direction the party would be headed on social and public safety issues if elected.

After experiencing a bump in the polls, rebounding from spring suggestions his party was heading towards defeat, O’Toole pivoted in the final week of the election to go hard with personal attacks aimed at Trudeau, while making the case to prospective vote-splitters that if their main objective was a change in government, their “only option” was to vote Conservative.

After bringing out former PM Brian Mulroney to endorse him on the same day he pledged that the party he is leading is “not your dad’s Conservative party,” O’Toole had to contend with the record of another high-profile conservative: Jason Kenney.

After the Alberta premier announced new lockdown measures, O’Toole was confronted repeatedly with questions about whether he still felt as he once said: that Kenney handled the pandemic better than the federal government. On this, and ongoing questions about his candidates’ vaccination status, O’Toole dodged repeatedly in the final days of this campaign.

On Sunday’s episode of CTV’s Question Period, Jenni Byrne, the former senior adviser to Conservative prime minister Stephen Harper, suggested that if the Conservatives don’t win tonight, “he will have a hard time staying on as leader.”

WHERE SINGH AND SMALLER PARTIES STAND

Based on pre-election-day polling, Singh is unlikely to become Canada’s next prime minister. Though could the allocation of seats for the New Democrats as well as the Bloc Quebecois put them in a stronger opposition? Or shift who will hold the balance of power if Canadians return another minority government to Ottawa?

Singh campaigned aggressively, going on the offensive with “unlimited zeal” in ridings the party thought it could win in key regions like Toronto, the Prairies, and British Columbia. Leveraging a sizable social media following, Singh also used platforms like Tik Tok and Instagram to get his progressive “tax the rich” message across to millions of Canadians.

The NDP leader leaned heavily over the last 36 days on pointing to what New Democrats were able to negotiate in the last minority Parliament, while pitching a message of hope for better in the future.

Blanchet made his way around Quebec over the last five weeks, but appeared to get his biggest boost in the province based on how he responded to a question to him by the English-language leaders’ debate moderator about Bill 21. While he repeatedly spoke about how unwanted this election was, he also emphasized his preference for no party to win a majority.

After being ranked low enough in the polls to not qualify to take part in the 2021 leaders’ debates, Bernier’s PPC has seen a steady rise in support among Canadians who are anti-establishment, anti-lockdown, and anti-vaccine. His supporters have been seen in crowds at Trudeau protests where known white nationalists and far-right groups also have representation. The uptick in popularity has prompted concerns of vote splitting on the right, though it remains to be seen whether the support will translate to seats.

And, after a rocky debut as leader due to internal party conflict and a tenuous financial situation, Paul spent the majority of the 2021 federal election campaign on winning her own riding of Toronto Centre. It’s her third try at it, this time with the pitch to voters to “be daring.” After a successful showing during the English-language debate, she made stops in some ridings, including spending much of the final weekend on the West Coast with her two Green incumbents.

Once the outcome is known, for all parties the next focus will be on the kickoff of the 44th Parliament, electing a Speaker, deciding on the future of hybrid sittings, and how they’ll position themselves on key issues as a new legislative agenda begins to take shape.