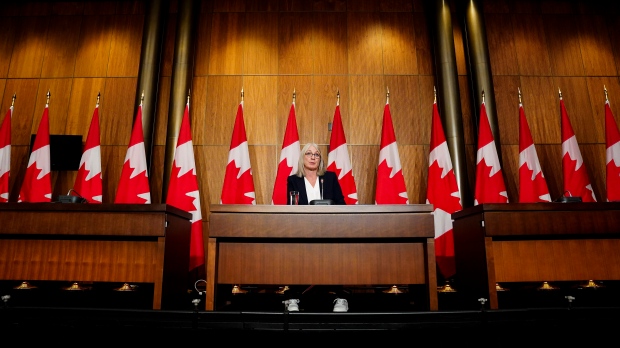 OTTAWA — The federal government is gauging interest among provinces and territories for shipments of the Johnson & Johnson COVID-19 vaccine, after Alberta, Saskatchewan, and B.C. make requests for the viral vector shot.

Health Minister Patty Hajdu said on Friday that Ottawa has started to survey the provinces and territories despite the government not having any usable doses on hand.

“We are working right now on those requests and have also offered an option to all provinces and territories who are interested in acquiring doses of Johnson & Johnson. We will be trying to provide those as quickly as possible to the provinces that are currently seeking them,” she said during a press conference.

“Currently we don’t have usable doses on hand, and so we’re looking for additional doses.”

Health Canada has authorized the one-dose vaccine for use, but the federal government announced in the spring that it would not release its first shipment of more than 300,000 doses for use.

That specific batch was quarantined in April before it was distributed to provinces because Health Canada was informed the drug substance in them was manufactured at the Emergent BioSolutions facility in Baltimore, Md., where there have been quality control issues.

Hajdu said on Friday that work is underway to procure usable doses from trusted manufacturers.

Earlier this week, Alberta Permier Jason Kenney requested thousands of the Johnson & Johnson shots to offer to those skeptical of mRNA-based vaccines like Pfizer and Moderna.

Alberta continues to struggle with a surge of COVID-19 cases, which has overloaded an already strained health-care system.

The federal government is providing human resources, personal protective equipment, medical equipment, vaccines and other resources to the province. The Canadian Armed Forces and the Canadian Red Cross have also been deployed to help put a lid on the health crisis.

Hajdu also reiterated the government’s support for Saskatchewan as cases continue to rise there and the province faces record-breaking hospitalizations.

In a statement to CTVNews.ca, the Saskatchewan Health Ministry indicated its desire for the Johnson & Johnson vaccine.

“Alberta and Saskatchewan are committed to working together to secure a supply of Janssen vaccine. The intent is provide it to primary health care sites or those locations where the single dose vaccine option would lead to an increased COVID-19 vaccination uptake,” the statement reads.

The B.C. Ministry of Health says the province has requested the viral vector vaccine “multiple times.”

“We have requested in writing 50,000 doses, but have been informed that there is currently no plan to bring it into Canada. We welcome other provinces joining us in this request. Having a variety of vaccination options is important to ensure we can provide vaccines to as many people as possible and reduce the transmission of the virus,” reads the statement to CTVNews.ca.

“This single dose product would be an important option to provide to people who may be difficult to reach for second doses.”

With a file from The Canadian Press.