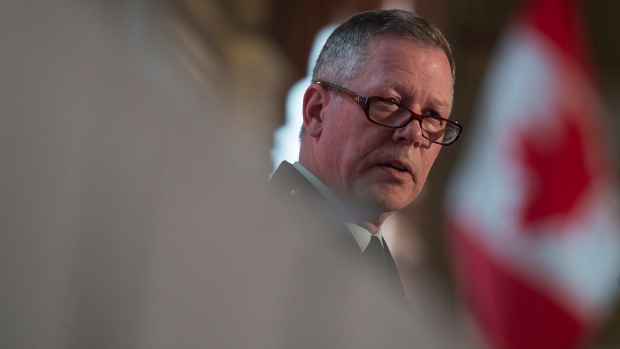 OTTAWA — Former defence chief Jonathan Vance’s obstruction of justice case has been adjourned till next month after its first, brief, virtual courtroom proceeding.

Military police charged the former Canadian Armed Forces commander, who was not present but represented by a lawyer at the hearing Friday, with one count of obstruction of justice in July.

Investigators referred the case to the civilian court system, citing what it described as “the limitations of the military justice system” in trying Canada’s top military officer.

The Canadian Forces National Investigation Service alleged in court documents that Vance repeatedly contacted a woman identified as “K.B.” in early February and “tried to persuade her to make false statements about their past relationship” to military investigators.

Maj. Kellie Brennan told a parliamentary committee in April that she and Vance had an inappropriate relationship that started in 2001 and continued after he became chief of the defence staff in 2015.

Brennan also told the committee she had recorded Vance telling her on the phone what to tell military police, and had turned those recordings over to the Canadian Forces National Investigation Service.

Vance’s lawyer Rodney Sellar did not respond to several phone calls this week. The former defence chief, who retired from the Canadian Armed Forces in April, has previously denied any wrongdoing.

Crown attorney Tim Radcliffe indicated during Friday’s hearing that the charge against Vance would be dealt with as a summary rather than an indictable offence.

Vance’s case is scheduled to return to court on Oct. 15.

Retired lieutenant-colonel Rory Fowler, who is now a lawyer specializing in military cases, says the decision to treat Vance’s case as a summary offence is notable.

The case will be tried without a jury in provincial rather than Superior Court, and Vance will face a maximum of two years less a day in prison if convicted, rather than up to 10 years if tried as an indictable offence.

“It signals that the Crown does not consider it serious enough to proceed by indictment,” said Fowler, who is one of the lawyers representing Admiral Art McDonald in his push for reinstatement as chief of the staff.

McDonald temporarily stepped aside in February, five weeks after taking over from Vance as Canada’s top military officer, due to a military police investigation into his conduct.

That investigation ended in August without any charges, though the Liberal government refused to reinstate McDonald and instead put him on administrative leave.

This report by The Canadian Press was first published Sept. 17, 2021.