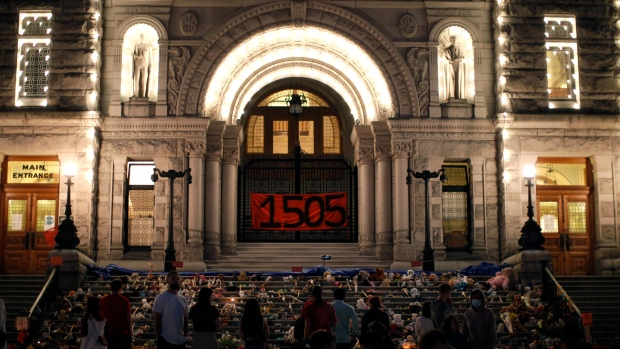 TORONTO — Indigenous advocates say Canadians can observe the National Day For Truth And Reconciliation by listening to stories of residential school survivors, wearing orange shirts in solidarity, donating to Indigenous-led causes, and choosing to personally fight for one or more of the 94 calls to action.

Cindy Blackstock, director of the First Nations Child & Family Caring Society, said there should be a sombre tone for the first federal day honouring the lost children and survivors of residential schools, their families and their communities.

“Approach it as you would Remembrance Day,” she told CTV’s Your Morning on Wednesday. “Keep in mind that children were more likely to die in residential schools than a solider was in the Second World War.”

Stories of unmarked burial sites were included in the 2015 report from the Truth And Reconciliation Commission (TRC), but it was only recently that the federal government implemented the day, which was one of the commission’s calls to action. The move followed the Tk’emlups te Secwepemc First Nation’s discovery of 215 unmarked graves at a former residential school in Kamloops, B.C.

The Indian residential school system operated in Canada between 1831 and 1996. The aim of the schools was to eliminate Indigenous languages and cultures — and replace them with English and Christian beliefs respectively. Approximately 150,000 First Nations, Métis, and Inuit children were separated from their families and forced to attend the boarding schools, where at least 4,100 students died, with that figure potentially being as high as 15,000, according to the TRC.

This year marks the first time that Sept. 30 has been designated a federal statutory holiday for all federal employees and federally regulated workplaces.

Many friendship centres and First Nations communities across the country will be holding their own events to mark the day. Blackstock’s group is partnering with the Assembly of Seven Generations, Project of Heart and Beechwood Cemetery in Ottawa to hold online and in-person events focusing on education, reflection and action.

FIND OUT WHICH CALLS TO ACTION YOU CAN FIGHT FOR: ADVOCATE

It has been six years since the TRC put together its 94 calls to action, which include improvements or overhauls to the health-care system, education, and foster care. While the government has been keeping track of its actions regarding the calls, many advocates say not enough of them have been implemented and that it’s time to pick up the pace.

Blackstock said Thursday’s public commemorations must also acknowledge these unfinished calls to action, as well as the ongoing crises Indigenous communities face, such as disproportionate representation in the foster-care system and the fact that dozens of First Nations are still under boil water advisories.

“The way that you can honour those children in the ground and also honour the survivors is to read the TRC’S report. There’s an executive summary that’s isn’t that long. You can read the calls to action, and you can take action on these,” she said.

Blackstock also urged people to take the day to send letters to their elected officials urging them to redress issues such as the crisis of missing, murdered Indigenous women and girls.

“[This is to say] … you are going to be watching to make sure that they honour those solutions to end the injustices. That’s really what the survivors want. They want a proper recognition of what they went through and accountability by the churches and by the government. And they want to these injustices stop for this generation,” she said.

‘SNOWBALL EFFECT’ OF EVERYONE DOING THEIR PART

Patricia Doyle-Bedwell is a Mi’kmaq lawyer and native studies Instructor at Dalhousie University. She says everyone should figure out how to advocate against systemic inequities facing Indigenous Peoples and to fight for at least some of the calls to action in the spaces people occupy on a daily basis.

“If you work for an art gallery, advocate for the inclusion of Indigenous artists into your shows,” she said.

Blackstock, for example, has been fighting the feds in court for years to give First Nations children truly equal access to services promised by the government. On Wednesday, she’s fended off Ottawa’s attempt to appeal two Canadian Human Rights Tribunal rulings which ordered the government to compensate victims of the child welfare system and extend eligibility for Jordan’s Principle.

“Maybe it’s only one thing, but if one person does one thing, eventually you can have a hundred people doing one thing,” Doyle-Bedwell said. “I think of it as like a snowball effect.”

HEAR FROM SURVIVORS, BUT EVERYONE DOESN’T WANT TO TALK

Many survivors and educators have said that the day should be spent on non-Indigenous people educating themselves and hearing from survivors willing to share their stories.

“You can really embody a concept or an idea by teaching some of the things. This day would be a good day to explain it to young children… to propagate that understanding to the next generation,” Shandin Pete, a Seliš and Diné researcher and assistant professor of teaching at the University of British Columbia, said in a phone interview with CTVNews.ca.

But he also cautioned well-meaning people to also remember that many First Nations, Metis and Inuit people might not wish to talk about their trauma.

“Some folks, they don’t like to revisit it, to bring it back up,” he said. “They don’t want to commemorate it, or sort of glorify it, even if it’s even if it’s a matter of trying to promote further community understanding.”

“It’s a very painful part of the past and you have to understand how it has affected the lives of Indigenous people today.”

But that’s why he and other advocates stress that a lot of information is already out there in online articles, books and reports — and that all of it should be a part of everyday learning.

The National Day for Truth and Reconciliation falls on the same day as Orange Shirt Day — an Indigenous-led grassroots commemorative day inspired by the cruel experience of Phyllis Webstad, a Northern Secwpemc from the Stswecem’c Xgat’tem First Nation, whose new orange shirt was taken away by residential school staff on her first day of school.

The orange T-shirt itself has become a symbol of reclamation of Indigenous culture and pride. Non-Indigenous people wearing an orange shirt or placing it in windows or doors has become a way to signal solidarity with residential school survivors and their families.

“You wear an orange shirt to say you remember. But more than that, [that] you’re committed to implementing the TRC’s calls to action,” Blackstock said.

Advocates have also stressed the importance of using Indigenous-created materials, with many online creating lists or highlighting Indigenous creators who are selling orange T-shirts.

“I’ve been telling them to go to your local friendship and see if they’re selling orange T-shirts. Don’t go to The Bay,” Doyle-Bedwell said. “It’s important to find out who is selling things, who is making money and where is it going.”

She said people should pay special attention to community groups who are also giving money back to residential school survivors.

Both Doyle-Bedwell and Pete said this is a great idea because supporters and allies can put their money where their mouth is.

“I think particularly of our homeless Indigenous population, and I would say that many of those folks are in that position because of some trauma they’ve had in their past,” Pete said.

“And if organizations and institutions have some sort of Indigenous strategy or some Indigenous education in their own institutions, I think that’s important. But I think it can only happen with the engagement of local Indigenous communities… and proper compensation for their time.”

All of this being said, Doyle-Bedwell reminds people that the National Day For Truth And Reconciliation is only 24 hours.

“I don’t think it’s something that we can all do in one day. But I’m thinking that it’s more of a commitment to say: ‘I’m going to learn and advocate and I’m going to be an ally.’”