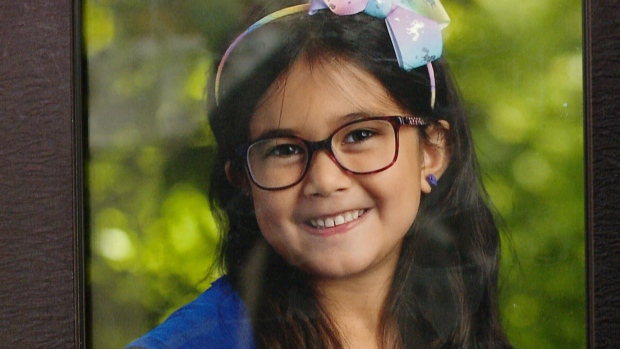 For two months, Mariecar Jackson has been trying to find her seven-year-old daughter who she says was taken by her ex-husband to an undisclosed location because he didn’t want the girl to get vaccinated against COVID-19.

Now, the Regina, Sask.-area mother is turning to the public for help in a desperate bid to find the young girl.

“In a pandemic, we just want to be with our family. We just want everyone to be safe and I don’t know where she is,” Jackson told CTV National News.

“It’s not good for seven-year-old to live in hiding. It just breaks my heart.”

Jackson’s ex-husband, Michael, refused to return seven-year-old Sarah after a visit in November. Mariecar wanted her daughter to be vaccinated; Michael, who is against the vaccine, did not.

Mariecar believes Sarah is being kept from other children, out of school and in hiding.

Meanwhile, Michael appeared on a right-wing talk show from an undisclosed location last week to discuss his views against the vaccine. During the interview, uploaded to the online platform Rumble, he and the host exchange unsubstantiated and disproven stories about COVID-19 vaccines, including false claims that MRNA vaccine change human DNA.

“I’m her father, it’s my job to protect her,” he says in the video.

The missing girl is visible in the background for much of the interview. At one point, the host asks whether the daughter wants the vaccine, at which point her father points the camera at her.

“It can change your DNA. I don’t believe God wants me to. And it can make you sick and kill you,” the girl said.

Saskatchewan RCMP say they are investigating but would not offer further comment on the matter.

Her mother says she still wants her daughter to get vaccinated, but says her main concern is that she returns home safely. She says she is willing to take the decision to court and let a judge decide.

Lawrence Pinsky, family lawyer in Winnipeg, Man., says these kinds of vaccine-related disputes are becoming more common in Canada as the pandemic continues.

“[This] has changed over time and become more of an issue about vaccination where people are asking the court either to vaccinate or to prohibit vaccination of their children,” Pinsky told CTV National News.

“But the courts have been pretty clear across the country but, particularly in Manitoba, the starting presumption is that vaccination is in a child’s best interest.”

In September, a court case in Saskatchewan involving divorced parents who disagreed on the vaccine issue made national headlines, with the judge ultimately siding with the father, who wanted their 13-year-old daughter to get the shot.

In December, a judge in Alberta ruled in favour of a woman who was fighting with her ex-husband over whether their children would be vaccinated against COVID-19, the first case of its kind in the province.

In a similar case in Quebec, a Superior Court judge ruled in favour of a mother who wanted to have her 12-year-old vaccinated against the father’s wishes.

“There may be an unusual case where the parent may be able to prove that for the particular child the vaccine isn’t warranted, that would be extremely rare and you would have to bring strong evidence,” Pinsky said.

“In theory, if one could show some medical reason with particular evidence then there would be a case. Otherwise the presumption is going to be that vaccines are in the child’s best interest.”