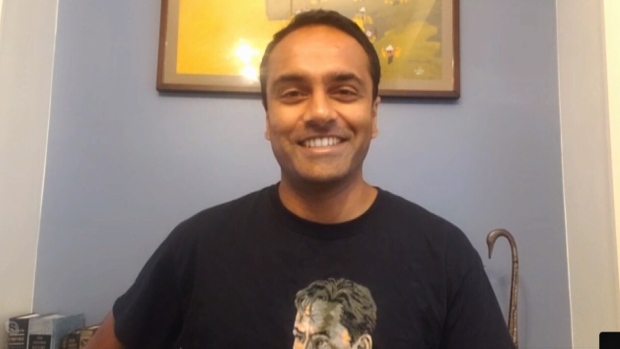 TORONTO — A colleague of Michael Kovrig says that he’s “thrilled” to hear that the Canadian is finally home after being detained in China for more than 1,000 days.

“It’s hard to describe but I’m just so thrilled for him and his family more than anybody else,” Praveen Madhiraju told CTV News Channel on Saturday. “This has been a long time coming and we’re just thrilled for this next chapter.”

Kovrig and fellow Canadian Michael Spavor both landed at Calgary International Airport early Saturday morning. Later that afternoon, Kovrig arrived in Toronto, greeted by his wife and sister on the tarmac at Pearson Airport. He briefly spoke to reporters at the scene, thanking them for their support.

“It’s fantastic to be back home in Canada,” Kovrig told reporters. “I’m immensely grateful for everybody who worked so hard to bring both of us back home.”

Since December 2018, the two men had been detained while facing espionage charges, which came not long after Canadian authorities — responding to an extradition request from the U.S. — arrested Huawei executive Meng Wanzhou in Vancouver just days prior.

While China has consistently denied that the cases were in any way connected, a B.C. judge discharged the extradition matter against Meng on Friday after U.S. Justice Department officials reached a deal to resolve the criminal charges against her, allowing Meng to enter into a deferred prosecution agreement and leave Canada, under certain terms.

The same day, Prime Minister Justin Trudeau confirmed that the two Michaels were on a flight back to Canada.

Madhiraju worked with Kovrig at Crisis Group, an international foreign policy think tank. Kovrig, an ex-diplomat, had been working in China as the group’s Northeast Asia advisor before his arrest.

“All of our staff has been focused on Michael’s release in this day since December 2018, more than 1,000 days,” Madhiraju said.

“A day didn’t go by since his detention that a large portion of our staff hadn’t thought about him.”

Crisis Group also released a statement on Saturday, applauding the efforts of Canadian diplomats to secure his release and expressing relief that the Chinese government has “righted this wrong.”

“Michael, we’re so proud of you. We’re so proud to have you as part of the Crisis Group family. You’re an inspiration to all of us. Welcome home,” the group said.

Madhiraju says Kovrig “showed the best of himself” during his time in detention.

“Throughout his time, he stayed very focused on discipline, on keeping himself mentally and physically fit. And out of that came a lot of grace and humility and humanity and concern and care for others,” he said.

“I think that will tell you more about Michael than anything else I can tell you.”

Michael Purity, who went to college with Spavor, was so elated to hear the news of his friend’s release he started dancing in celebration.

“I think if there was a man that could pull it off and come out with a smile on his face and a gentle attitude about life, I think that might be Michael Spavor,” he told CTV News Channel on Saturday.

Purity revealed that Spavor, who has taught English in North Korea and is one of few Westerners to have actually met Kim Jong-Un, was also briefly a character on one of the country’s TV sitcoms.

“It takes a special kind of man,” Purity said. “He’s just a man with a big smile and a big heart, and that’s the truth about him.”

He added that the release of Spavor is good news for all Canadians.

“Another man free is a big deal for Canada, so freedom always wins and we just need to keep up the hope and have faith,” he said