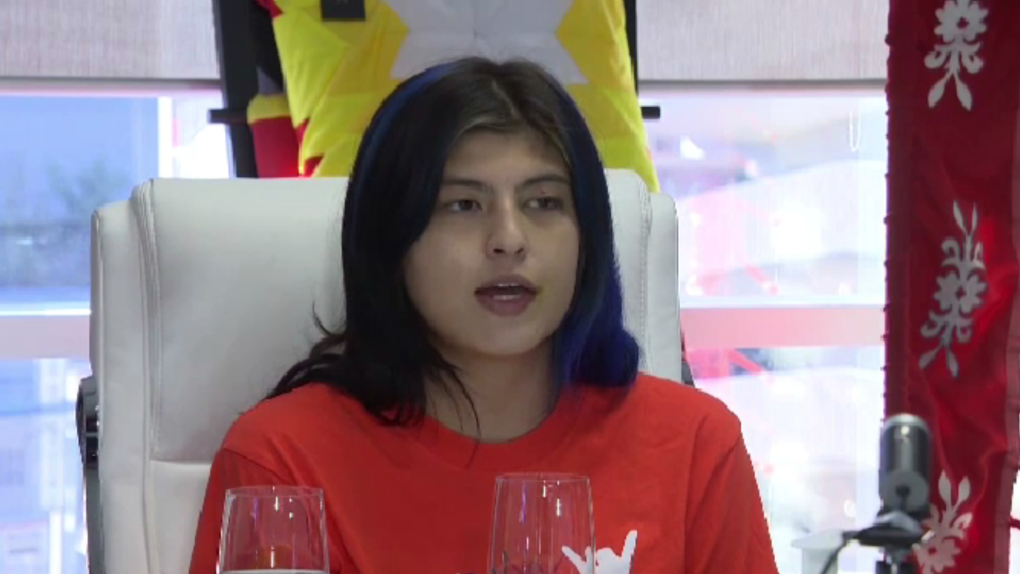 A 19-year-old Indigenous woman says she was assaulted by a Winnipeg cab driver who she believed was possibly trying to abduct her.

Serenity Morrisseau has scrapes and bruises from the ordeal over the weekend.

But the cab company says it was the driver who was being attacked.

Morrisseau says early Sunday morning she and two friends were in a Unicity cab on Portage Avenue. She says during the ride the driver tried to pawn them off to another taxi offering to take them to a party.

“I started to videotape because I felt unsafe.” said Morrisseau

Morrisseau says that upset the driver and he slammed his brakes and stopped the car on Arlington and Portage.

She says her two friends who were in the cab jumped out and so did the driver.

She says she could not get out because the driver punched her four times through a window, and got back in the driver seat and took off. Morrisseau says she was halfway out of the door.

“I could feel like the burning of my feet coming from being dragged like 30 kilometres an hour down Arlington,” said Morrisseau.

In video taken by one of her friends, you can see taillights in the distance and someone yelling for help.

Skye Templeton says all she could think about was getting her friend out of the taxi.

“Such a helpless feeling like you’re left with, my friend could have been gone,” said Templeton. Morrisseau says she bruised her arms and broke her nails when she squeezed her arms between the cab’s plastic shield and ceiling and grabbed the driver’s eyes and forehead, forcing him to stop. She says he pulled her out of the cab and witnesses came to help her.

“I really didn’t know where he was going to take me, I just didn’t want to get to the point where I found that out,” said Morrisseau.

The 19-year-old has the support of the Assembly of Manitoba Chiefs. Grand Chief Arlen Dumas says changes need to be made in the taxi industry because Indigenous women don’t feel safe in a cab. “I would expect that a cab would be a place of safety, would be a place of sanctuary,” said Dumas Unicity tells a very different story.

General Manager Satwinder Shahi says the driver is the victim.

“Bruises on his eyes and his whole t-shirt was ripped off,” said Shahi.

Shahi says the conflict began when one of the passengers opened a beer and refused to wear a mask.

He says the passengers began attacking the driver and that’s why he stopped the taxi and got out. He says once two of them left the vehicle, the driver decided to drop Morrisseau off down the street to avoid conflict with all three.

“Only third one who was in the car and was aggressive and drunk he preferred to drop her off like 500 metres from there.” Unicity says the emergency strobe light on the cab was not activated. It also says police have the video and audio from inside the cab.

The Winnipeg Police Service says it is investigating, adding both parties have reported assaults and both had visible injuries.

Serenity Morrisseau’s mom Tracy Bone says a peaceful gathering is planned Wednesday at 5:00 p.m. for people to voice similar concerns and offer resolutions. She says they will meet at the camp on the legislative grounds to discuss the route for the event.