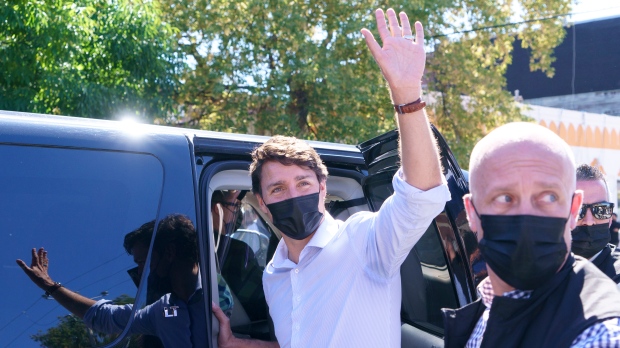 OTTAWA — Liberal Leader Justin Trudeau has held on to power at a pivotal time in the pandemic, clinching another minority government in the 2021 federal election.

CTV News’ Decision Desk declared the Liberal minority win after polls closed across the country in a federal election like no other.

While long lines in some ridings mean voters could be casting ballots for hours more, early results show the Liberals elected or leading in 157 seats.

There are 338 federal ridings up for grabs tonight. A party needs to win at least 170 seats to form a majority government.

Heading into this race the Liberals held 155 seats, the Conservatives held 119 seats, the Bloc Quebecois held 32 seats, the NDP held 24 seats, the Green Party held two seats, there were five Independent MPs, and one vacancy.

As results continue to stream in, all eyes will be on Conservative Leader Erin O’Toole, whose pitch for change appears not to have resonated in the way his party hoped. Conservative Party officials sought to dismiss reporting on Monday evening that suggested they’d consider holding the Liberals to a minority as a win.

Looking to the other parties, Bloc Quebecois Leader Yves-Francois Blanchet has so far largely held on to the seats his party held prior to the election call, though an uptick in votes for NDP Leader Jagmeet Singh’s candidates currently has the two parties in a nail-biter fight for third-party standing. Green Party Leader Annamie Paul and People’s Party Leader Maxime Bernier failed to outseat the incumbents in their ridings.

Trudeau called the federal election on Aug. 15, putting the end to his nearly two-year minority Parliament, in search of a majority win.

When Trudeau called this election on a sunny Sunday morning in mid-August, he set up his re-election bid as a chance for Canadians to have their voices heard about who they want to lead the country out of the COVID-19 crisis, and into a new era of considerable change.

Based on the initial results, the overall seat distribution in the House of Commons has not shifted considerably, meaning the Liberals will once again have to find dance partners in other opposition parties to pass key legislation.

Between the ongoing pandemic and the active national conversation about mandating vaccinations, the outcome of this vote will inform how the Liberal-led federal government will proceed in the fight against COVID-19 and building a path towards addressing other key issues that arose on the campaign trail: housing affordability, childcare, and economic growth.

Right off the bat the campaign— the shortest possible election period under federal law— looked and felt different than any past election, because of the pandemic.

Travel itineraries were more pared-down, the main three travelling leaders’ tours used rapid tests daily in addition to requiring all aboard their busses or planes to be fully vaccinated, and instead of nightly jam-packed indoor rallies, virtual or outdoor events with elbow-bumps and masked selfies largely became the new norm.

There were three national debates, including one in English and one in French put on by a debates’ commission; parties pushed out their platforms and the costing of them at different times; candidate controversies hit every party; and campaigns sought to leverage social media and traditional television advertising to promote their leader and offer contrast to their opponents.

How Canadians voted also changed in some ways from past elections. Nearly one million people voted by special mail-in ballots, and another 5.8 million took part in the four days of advance polls, an increase of 18.5 per cent compared to the 2019 election.

COVID-19 protocols at some polling stations resulted in long lines and longer-than-usual wait times at polling stations. Elections Canada also reported a handful of disruptions at polling stations across the country. While no widespread voting issues have been reported, because of the influx in local mail-in ballots, the final tallies won’t be known until Tuesday at the earliest.