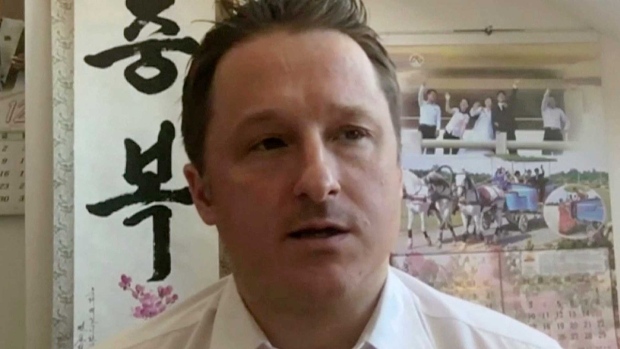 OTTAWA — Michael Spavor is thanking Canadians and the world for their support one week after his 1,020-day ordeal in Chinese prison came to an end.

Spavor, along with Michael Kovrig, were released a week ago after the United States dropped its prosecution of Chinese high-tech executive Meng Wanzhou.

The two men had been arrested and convicted of spying by China in what is widely seen as retaliation for the RCMP’s Dec. 1, 2018, arrest of Meng at the Vancouver airport on an American extradition warrant.

The saga came to an end when the U.S. entered into a deferred prosecution agreement with Meng that resulted in charges against her being dropped and the extradition request withdrawn in a Vancouver court.

Meng, who was under house arrest in Vancouver in a luxury mansion, was set free and was on a chartered airliner back to China at the same moment as Kovrig and Spavor departed on a plane out of China accompanied by Dominic Barton, Canada’s ambassador to the country.

Spavor arrived in his hometown of Calgary early Saturday morning aboard a Canadian Forces Challenger jet, along with Kovrig, and the pair were greeted by Prime Minister Justin Trudeau before Kovrig made the final leg of his journey to Toronto.

“I’m overjoyed to be finally reunited with my family. It’s humbling as I begin to understand the continued support that we’ve received from Canadians and those around the world, thank you,” Kovrig said in a statement that was released Friday by Global Affairs Canada.

“I’m appreciating being outside and the simple things around me.”

Spavor and Kovrig spent almost all of their time in captivity in separate prisons, much of it in solitary confinement.

The message included an attached photo of a smiling Spavor and a large grey dog.

A statement from Global Affairs accompanying the photo and statement said: “At this time, the family requests that you continue to respect their privacy – no further comment will be provided.”

This report by The Canadian Press was first published Oct. 1, 2021.