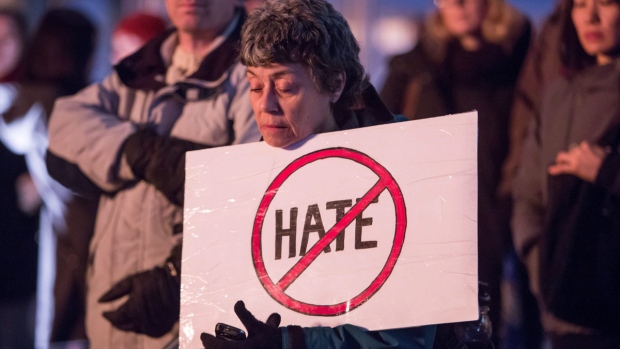 LONDON, ONT. — Dareen Shilbayeh can’t stop herself from looking over her shoulder while out in public.

The London, Ont., resident who wears a hijab says she’s been worried she’ll be targeted because of her faith ever since a Muslim family was killed in the city this summer.

“Every corner I take, even at the mall, when it’s a public place, it’s like, I have to be careful,” said the 19-year-old who grew up in London and is a student at the city’s Western University.

It’s a sentiment many Muslim Canadians have shared after four members of the Afzaal family, who were out for an evening stroll, were run down and killed by a vehicle in what police have called an attack motivated by hate.

At a vigil held outside a London mosque two days after the June 6 tragedy, federal party leaders condemned Islamophobia and made promises to fight it.

But some, including Shilbayeh, say there has been little action since then, and argue the issue hasn’t been discussed enough during the campaign.

“I don’t think they’ve addressed it in any sense,” Shilbayeh said. “Act on what you say.”

“They’re not helping at all,” said Shaheen, who also wears a hijab. “I’m not feeling safe.”

Saboor Khan, a friend of the Afzaal family, said the issue of tackling Islamophobia appears to have been pushed down on the political priority list.

“There is more attention to it than before, but I don’t think it’s sufficient,” he said.

The Liberals said that if re-elected, the measures they will take to fight Islamophobia include presenting a national action plan on combating hate by 2022, investing $10 million for a national fund for survivors of hate-motivated crimes, and introducing legislation within 100 days to tackle hateful online content.

“We recognize that there is a lot more to do, and a re-elected Liberal government will continue to work closely with Muslim communities and all Canadians to address hate in Canada,” said spokeswoman Adrienne Vaupshas.

Meanwhile, the Conservatives said they were committed to working with the Muslim community to “do the hard work of finding concrete solutions to these problems.” They also said they plan to fight online hate “by clearly criminalizing statements that encourage violence against other people or identifiable groups.”

The NDP said it would work with provinces, law enforcement and non-profits to build a “national action plan to dismantle far-right extremist organizations.” The party said it would also work with justice officials to standardize how hate crimes are treated in the courts.

“The London attack was a horrific by-product of the systemic racism and Islamophobia that Canada continues to struggle with,” a spokeswoman said. “New Democrats know we cannot turn away from this uncomfortable truth, but face it head on in order to eliminate it.”

Aarij Anwer, an imam at the London Muslim Mosque, said it “meant a lot” to have federal party leaders attend the vigil held in London in the aftermath of the attack in the city.

“Not too long ago, even mentioning sympathies towards Muslims would be considered out of balance for some politicians,” he said.

At the same time, Anwer said “that’s not enough progress, because nothing has happened since then of substance.”

Fatema Abdalla, a spokeswoman for the National Council of Canadian Muslims, agreed, saying there’s “definitely a lot more that could be discussed” by politicians vying to form the next federal government.

“Over the last few months, we’ve heard every single political leader come up on stage and commit to change,” she said. “However, it’s sort of sad that we’re not seeing that same reflection in their platforms when it comes to real, tangible policy change and commitment against Islamophobia.”

Abdalla said the national organization is calling on the next federal government to create a national action plan against white supremacy and to challenge Quebec’s Bill 21 in court, among other measures. That piece of legislation prohibits some public sector workers from wearing religious symbols including turbans, kippas and hijabs in the workplace.

Anwer, from the London mosque, said he would like to see a non-partisan office introduced to specifically address Islamophobia as well as a dedicated service to tackle hate crimes.

He added that he hoped people recognize the issue of Islamophobia and other forms of discrimination as a “Canadian issue” worth fighting.

“This is not something that will just go away,” he said. “I hope Canadians don’t see that as something that can be ignored and hopefully just out of sight, out of mind. This is a problem that has to be addressed head on.”

This report by The Canadian Press was first published Sept. 18, 2021.

This story was produced with the financial assistance of the Facebook and Canadian Press News Fellowship.