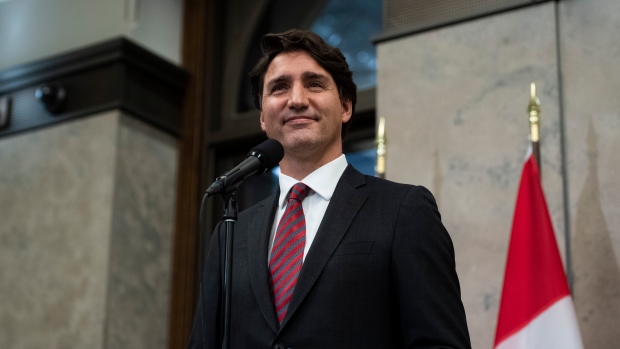 OTTAWA — Prime Minister Justin Trudeau says that he intends to name his new cabinet in October, bring Parliament back “before the end of fall,” and implement the promised federal vaccine mandate as soon as possible.

At his first major press conference since the Sept. 20 federal election, which saw Canadians hand the Liberals another minority, Trudeau said that he confirmed on Tuesday with Gov. Gen. Mary May Simon his intention to form the next government.

“We just got through an election where Canadians made it very clear the kinds of things they want us to work on, and I’m looking forward to getting into it,” Trudeau said.

While he has other key cabinet decisions to make, he has already asked Chrystia Freeland to continue as deputy prime minister and finance minister, which she has accepted.

The prime minister said that he’ll be having conversations with the rest of his desired ministerial roster in the coming weeks as he works to regain gender balance in his post-election front-bench.

“The exact dates still to be worked out, but we are busy getting into the business of delivering on an ambitious agenda that Canadians laid out,” Trudeau said.

Citing the recent freeing of Michael Kovrig and Michael Spavor and calls with provincial premiers and U.S. President Joe Biden since last Monday’s election, Trudeau said he’s been busy and has “lots of work ahead… alongside Chrystia, and to come, an extraordinary team of Liberal ministers and MPs.”

The prime minister said that he chose to visit a vaccine clinic before taking questions on Tuesday because getting through the COVID-19 crisis remains his top priority.

Specifically, Trudeau restated his promised intention to implement a federal vaccine mandate that will include making COVID-19 vaccination a requirement for federal workers, and making sure that anyone aged 12 and older who wants to board a domestic plane or train be fully vaccinated.

The prime minister also said that his government will move ahead with an international vaccine passport for fully immunized Canadians who want to travel abroad, foot the bill for provinces who have already gone ahead with their own vaccine certificate systems, and impose criminal sanctions on those who harass health-care workers.