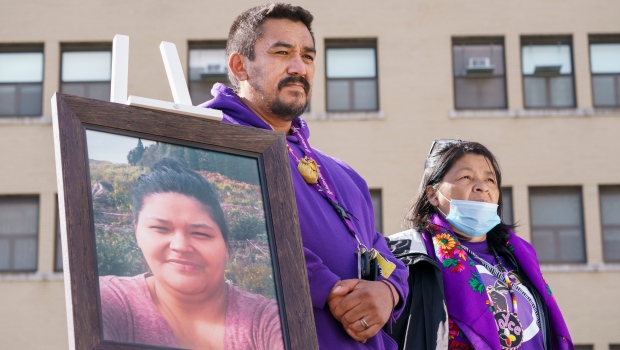 MONTREAL — The coroner investigating the death of Atikamekw mother Joyce Echaquan says it’s important that the Quebec government “acknowledge the existence of systemic racism within our institutions and make a commitment to help eliminate it.”

Géhane Kamel made the recommendation in her final report following an inquest into the 38-year-old’s death.

“The racism and prejudice that Ms. Echaquan faced was certainly a contributing factor in her death,” the report finds. “This was an accidental death.”

She livestreamed the experience on Facebook, while crying out in pain due to stomach pains.

The video went viral after her death, leading to nationwide calls to improve conditions and services for Indigenous people within the health care network.

According to a statement of facts in the coroner’s report, Echaquan arrived at the hospital at 11 p.m. on Sept. 26. She was pronounced dead two days later.

“Her admission diagnosis was a recently exacerbated microcytic (red blood cells that are smaller than normal) iron-deficient anemia and epigastric pain of unknown cause,” the report states.

She was kept under observation, but started showing signs “of agitation” the next day.

Kamel states the medical staff suspected she was experiencing withdrawal symptoms from narcotics and cannabis.

“[An] evaluation…concluded that the symptoms described by Ms. Echaquan were unrelated to physical withdrawal from opioids or stimulants,” the report notes, adding there is no proof that she was drug dependent. “Yet, Ms. Echaquan was quickly labelled a bondage patient. Based on this prejudice, her pleas for help were not taken seriously. This label followed her throughout her stay, prejudicing the actions of the nursing staff until her death.”

Due to intense discomfort, Kamel writes that Echaquan fell off her stretcher at least two times.

“Denigrating words are spoken by the nursing staff,” the report states. “She was put back in bed, the intravenous infusion was reinstalled and then restraints were applied, first to all four limbs, before the abdominal belt was installed.”

Echaquan’s autopsy suggests she died of pulmonary edema, a condition caused by excess fluid in the lungs.

“Ms. Joyce Echaquan died as a result of pulmonary edema caused by cardiogenic shock in the context of a [pre-existing] diseased heart, associated with possibly harmful maneuvers, such as being kept in a supine position in restraints without adequate supervision,” the report concludes, noting she most likely suffered significant respiratory difficulties because she was tied down.

The public hearings into Echaquan’s death were held from May 13 to June 2, 2021.

“The findings of this inquiry indicate that Ms. Echaquan was indeed ostracized, that her death was directly related to the care she received during her hospitalization in September 2020, and that her death could have been prevented,” Kamel states.

“It’s very important to see that as the first recommendation among the other ones, but also to acknowledge that again, another important organization or institution is taking a strong position on that,” she said.

Following Echaquan’s death, the coroner is recommending several changes be made.

Firstly, that the Quebec government acknowledge the existence of systemic racism within our institutions and make a commitment to help eliminate it.

That the Ministry of advanced education that trains physicians, nurses and nursing assistants:

REACTION TO THE REPORT

McGill professor Wanda Gabriel from the Kanien’kehá:ka (Mohawk) community of Kanesatake wonders how many independant reports it will take for the Quebec government to acknowledge systemic racism.

“It’s sad and very disappointing and maddening because unfortunately, Joyce is not the only person who experienced that kind of bias, and that kind of stereotyping,” said Gabriel.

The CAQ government has acknowledged that racism exists in the province, but stops short at using the term “systemic racism.”

“We always recognize the fact that there are racist people in Quebec, in all sectors of activity,” said deputy premier Genevieve Guilbault. “What we want to do, and what we are doing is to fight as concretely as possible against racism.”

Opposition leaders in the National Assembly are not convinced the government’s approach will fulfill its goal.

“You cannot fix a problem if you don’t recognize that you have a problem, so there’s never going to be a reconciliation,” said Liberal leader Dominique Anglade.

PQ leader Paul St-Pierre Plamondon, meanwhile, said the coroner overstepped her mandate by weighing in on what he called the debate over systemic racism.

“I don’t understand why we are debating this right now, while we should be taking concrete actions so things like what happened a year ago in Joliette, never happen again,” said Plamondon.