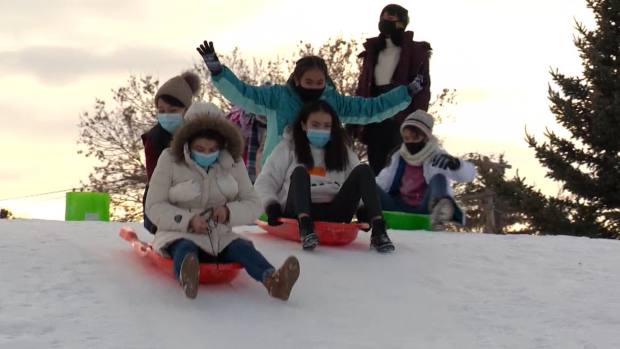 SASKATOON, SASK. — A large group of young Afghan women and their families have found a warm welcome in snowy Saskatoon.

Since September, about 200 refugees have arrived in the Saskatchewan city from Afghanistan. The young women in the group, which includes their families, were all students or graduates of the Marefat School in Kabul, which championed women’s education. Since the Taliban’s takeover of the country in August 2021, the school has only been open to boys.

Saskatoon teacher Tanis Folstad says her newest students have been excelling, in large part because of the English they learned in Kabul.

“They’re very hardworking and they take their school very seriously, and I can see that the other students are inspired by them,” Folstad told CTV News.

“She’s so kind, yeah I love her,” Muzhgan Samim said of her new teacher.

Fearing for their lives under the Taliban, many of the young women and their families underwent a harrowing journey through Afghanistan to Pakistan on their way to Canada. When they finally landed in Saskatoon, Staff Sergeant Patrick Barbar of the Saskatoon Police Service made sure he was there to greet them.

“When I was at the airport and the doors opened, I realized that these were the lives that we were actually changing,” he told CTV News.

In 2010, Barbar spent a year helping train the Afghan National Police. When the country fell to the Taliban last year, he was left wondering if his service had been worth it. Barbar says seeing the young refugees and their families arrive in September proved to him that it was.

“This was the closure that most of us were looking for,” Barbar said. “It’s important for us as a country to keep welcoming as many people as possible, because this is us finishing the job that we started almost 20 years ago.”

The Canadian government has promised to resettle 40,000 Afghan refugees, although there is no timeline for doing so. To date, Canada has brought in nearly 7,000 people from Afghanistan since Aug. 2021 through three different streams, according to official numbers. Immigration, Refugees and Citizenship Canada has also received 14,720 applications from Afghans who helped the Canadian military during what was Canada’s longest war.

In Saskatoon, former newcomers are also helping the young women and their families adjust to life in Canada, like Sultan Ali Sadat. Sadat works with the Saskatoon Open Door Society, a non-profit that assists newcomers. He arrived as a refugee from Afghanistan in 1998, when the Taliban were first in power.

“Whatever we have excess of we give it, share with them,” Sadat told CTV News. “It feels like because they have no one here – the brother, the sister, the parents – we are family members for each other.”

Saskatoon Mayor Charlie Clark says the city is getting back more than it’s giving to its new residents.

“We all become stronger when we work together to help other people,” he told CTV News. “So, it is a great source of strength for our community.”

Having so much community support has in turn given the Afghan women strength, as well as hope and courage to dream of helping girls back home return to school.

“Provide an opportunity, a chance for them to study and to stand on their feet,” newcomer Mina Rezwani told CTV News. “That’s my dream, only to work for the girls.”

Rezwani remains optimistic as she experiences her first Canadian winter.