Hundreds of people attended court in a small western Alberta town on Tuesday morning for the first appearance of a man charged in the double homicide of a young woman and her toddler.

Robert Keith Major, 53, is facing two charges of second-degree murder in the deaths of Mchale Busch, 24, and her son, Noah.

They were confirmed dead on Friday, Sept. 17, a day after they had been reported missing by loved ones.

The crowd outside the Edson provincial court fell silent as Cody McConnell, Busch’s partner and Noah’s father, walked up to the entrance.

“It’s unfair. My 16-month old boy was ripped away from me, and my beautiful wife,” McConnell told reporters, speaking briefly outside the courthouse. 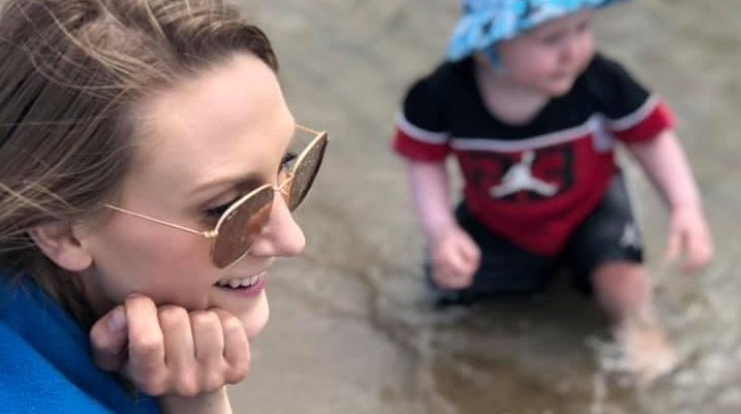 Mchale Busch, 24, and her son Noah McConnell were confirmed dead by Alberta Mounties on Friday, Sept. 17, 2021. The next day, Robert Keith Major, 53, was charged with two counts of second-degree murder and one count of indignity to human remains. (Source: GoFundMe)

“The system failed Mchale and Noah by not letting us know we moved in next to a convicted sexual offender whom the police had reasonable grounds to believe he (would) commit another offence.”

On Saturday, Mounties announced two charges of second-degree murder against Major, a convicted sex offender who lived in Busch’s apartment building in the nearby town of Hinton.

Many of those who stood outside court on Tuesday wore high-visibility vests and jackets; some told CTV News Edmonton they were oilfield workers and colleagues of McConnell. Their company encouraged anyone who wanted to attend.

Those outside the courthouse expressed frustration and anger that Major had been released in Edmonton in 2017 when police had reason to believe he would offend again. At the time, Major was placed under several court-ordered conditions, including a curfew and a ban from being around children.

It is not known when he moved to Hinton, a town of 10,000 about three hours west of Edmonton, or if the community was notified.

In a statement, RCMP said Major had not been subject to any recognizance conditions since July of 2020.

Under Alberta’s Personal Information Protection Act, a landlord cannot ask for consent to collect personal information. McConnell and his family want that changed.

“This should never have happened,” one worker told CTV News Edmonton.

“We work together, we sleep next to each other in motels. We dine with each other… This is family. And this really hurts. It really hurts that somebody has to wake up in the morning to find his wife and … baby gone.”

Another worker added, “At times I want to just about go in the back and cry.” 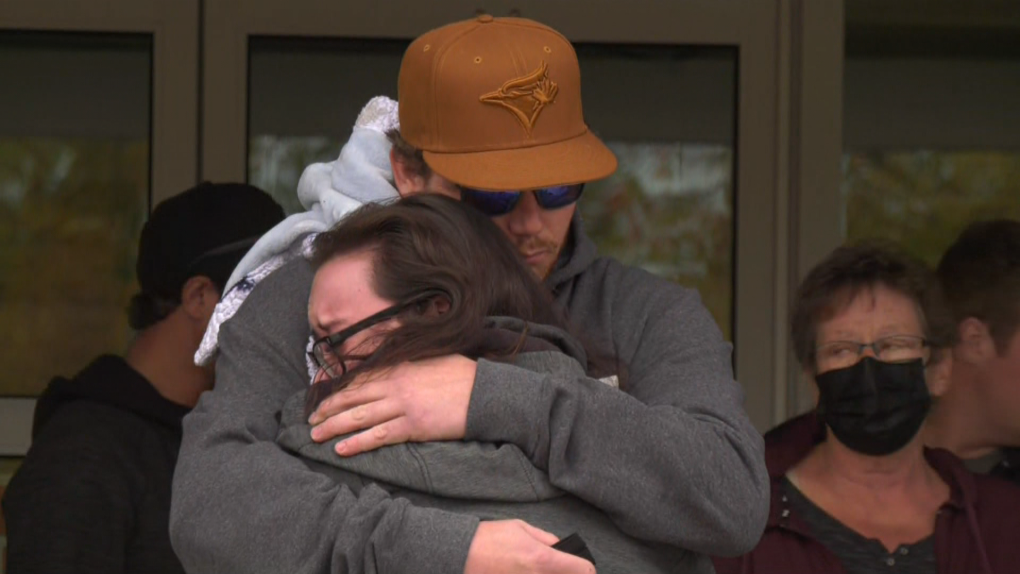 Cody McConnell, 27, hugs a sobbing woman outside Edson provincial court on Sept. 21, 2021, the day Robert Major was scheduled to make his first appearance. Major was charged with two counts of second-degree murder in the deaths of McConnell’s partner, 24-year-old Mchale Busch, and their toddler, Noah.

At one point, McConnell raised his hand and thanked his “brothers.”

Some in the crowd responded, “We stand with you, brother.”

Major also faces one count of indignity to human remains. Police are not looking for any other suspects.

On Tuesday, Major was denied bail and scheduled for another court appearance on Oct. 20 in Hinton.

Family and media did not get to watch Tuesday’s proceeding done remotely in Hinton, as they were told it had been scheduled in Edson. The justice department later called the mistake a clerical error.