New York police are searching for seven young men involved in beating a 14-year-old boy in a Brooklyn subway station.

The New York Police Department (NYPD) is asking the public to help identify the individuals who participated in the March 14 attack which they filmed and uploaded to social media, according to a police statement shared with the Daily Caller News Foundation.

The six attackers can be seen punching and kicking the teen victim while a seventh man filmed the event in selfie mode and flashed a symbol with his hand, according to a video shared by the NYPD.

🚨WANTED for ASSAULT: Know these guys? On 3/14/22 at approx 3:57 PM, inside the Van Siclen Ave subway station in Brooklyn, the suspects approached a 14-year-old male, then punched and kicked him multiple times about the head and body. Any info? DM @NYPDTips, or call 800-577-TIPS. pic.twitter.com/HX90Pfc7rd 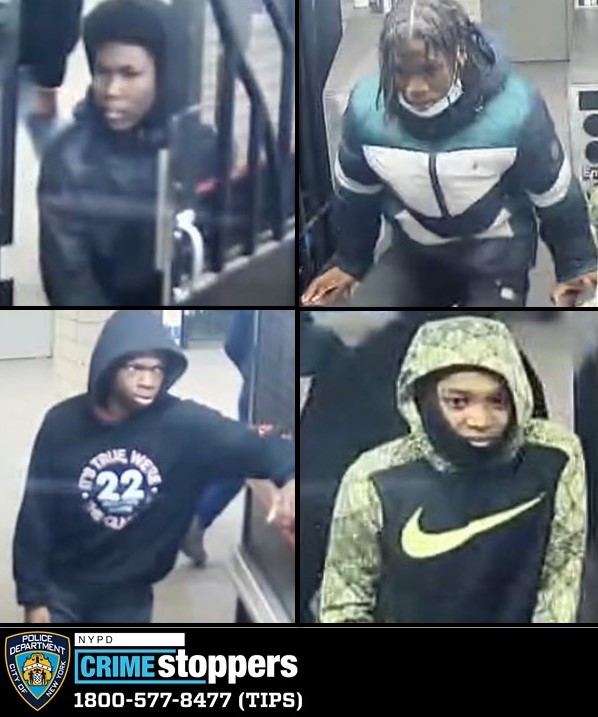 The faces of four suspects who allegedly assaulted a teenager in the New York City subway. (Photo courtesy of the New York Police Department)

The attackers’ faces were obscured in the video, but four of them were captured clearly in other images shared by the NYPD.

The 14-year-old victim, who was not publicly identified, suffered swelling and bruising, and he sought medical treatment after the attack, according to the NYPD. (RELATED: Amid Soaring Crime Rate, NYC Mayor Urges Residents To Eat Plant-Based Diet, Compares Cheese To Heroin)

New York City Mayor Eric Adams launched a new safety program to reduce violent crime in the subway system after a string of violent attacks. The program, which began Feb. 18, involves increased police patrols in “high-priority” areas and the removal of mentally ill and homeless inhabitants of the city’s public transportation system.

Content created by The Daily Caller News Foundation is available without charge to any eligible news publisher that can provide a large audience. For licensing opportunities of our original content, please contact licensing@dailycallernewsfoundation.org.