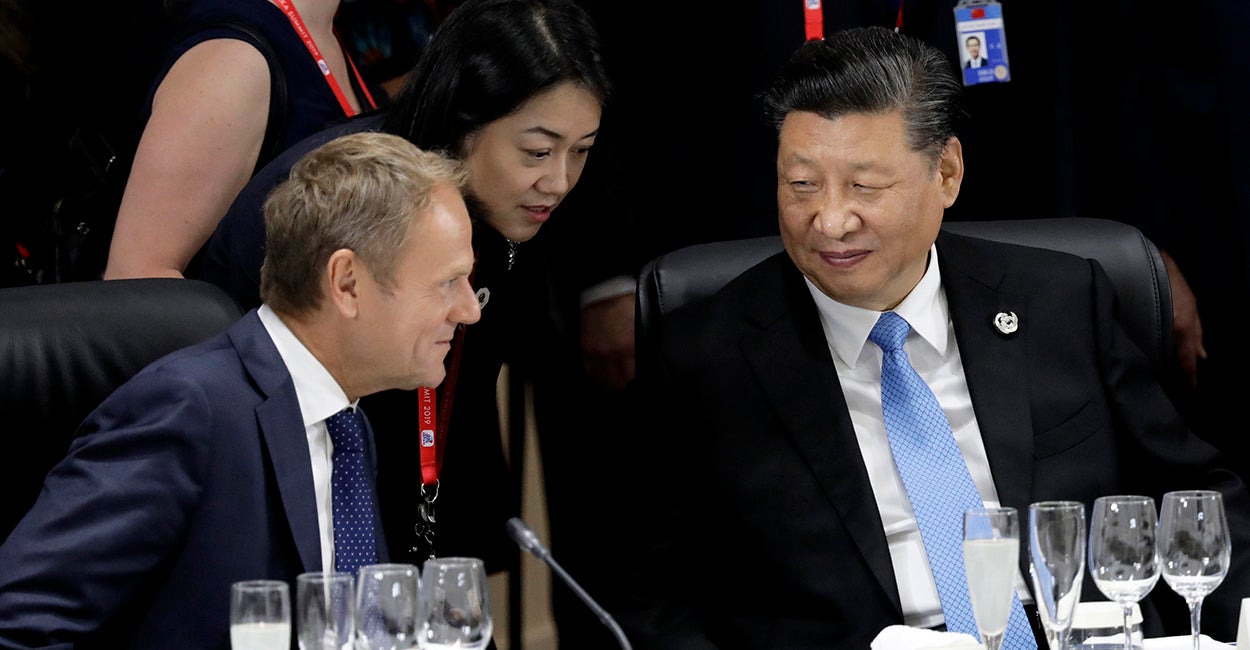 For a few years now, China has been hampering its own economic engagement with the European Union. Chinese diplomats are often described as “wolf warriors” as they aggressively, sometimes offensively, assert China’s interests in the international arena. As a result, even in the absence of a serious, robust U.S. government approach to trade with Europe or anywhere else in the world, China’s aggression has inadvertently helped keep the U.S. in the game.

China has doubled down on “wolf diplomacy” in Europe. In 2020, the Chinese embassy in the Czech Republic threatened Czech companies if the senate president visited Taiwan. After the EU’s sanctions on China over human rights abuses against the Muslim Uyghurs in Xinjiang in 2021, China struck back with its own sanctions against the EU.

And in January of this year, China imposed a trade boycott on Lithuania after the latter allowed Taiwan to open a de facto embassy there. Most recently, in May, China warned the EU not to “gamble on the Taiwan issue,” after the EU’s decision to upgrade its trade and investment relations with the island.

The most visible impact from this series of political clashes was to the pending approval of the EU-China Comprehensive Agreement on Investment, or CAI, at the European Parliament. The agreement has been in the freezer, as one member of parliament put it, since last year.

Does China really want to break its economic ties with the EU? The answer is no. China regards the EU as a critical counterbalance to the U.S., so much so that the CAI negotiations were concluded in December 2020, a month before the Biden administration took office and could have imposed even higher tariffs and other trade barriers against China.

The EU described this deal as “the most ambitious that China has ever concluded with a third country.”

The EU has been a key investor in China’s manufacturing industry. In 2019, for example, the EU invested $4.3 billion in manufacturing there. It was only behind South Korea ($4.4 billion) and Hong Kong ($15 billion) and far ahead of manufacturing investments from the U.S. ($0.9 billion), according to China’s Ministry of Commerce.

Indeed, even the investment from Hong Kong may be less noteworthy than it appears, as much of it is Chinese capital in Hong Kong flowing back to China after round-tripping the territory.

In the first quarter of this year, the EU was also China’s second largest trade partner, only after the Association of Southeast Asian Nations, a union of 10 member states in Southeast Asia, according to China’s General Administration of Customs. China-EU trade mostly involves machinery, vehicles, and other manufactured goods.

In comparison, the direct industrial linkage between the U.S. and China through trade is relatively weak. China trades mostly in finished products with the U.S., exporting final consumption goods and importing mostly food stuffs, electrical machinery (including semiconductors), other machinery, and transportation equipment (including aircraft).

Unlike EU companies’ notable manufacturing investments in China, many U.S. companies rely on manufacturing in other Asian countries with only final assembly in China. At the same time, the U.S. is dominating the licensing of intellectual property and design and research and development activities in the U.S.-Asia production network.

Chinese companies also need the CAI to safeguard their positions in the EU market. In 2020, China invested $10 billion in the EU compared to only $6 billion in the U.S., according to China’s Ministry of Commerce.

Beijing believes its huge market and closer economic and industrial linkage with the EU will give it greater political leverage with Europe. So far, the EU has been resistant to China’s political pressure. For example, it backed Lithuania by providing financial aid for companies hit by China’s trade restrictions. In addition, the EU has continued to support not only economic cooperation with Taiwan but also Taiwan’s democracy and national security.

Despite all the advantages it stands to gain from a better relationship, however, Beijing can’t seem to help itself. Authorities hoped to get things with Europe back on track in April. The EU-China Summit that month, however, ended without clear improvement in their relations due to China’s disregard for EU concerns about human rights issues with the Uyghurs and its refusal to condemn Russia’s invasion of Ukraine, a significant threat to the European security.

Instead of addressing the concerns, China called for the EU to formulate and pursue an independent policy toward China different from the U.S. The European officials deeply resented the implication that their policy followed the United States’.

China needs Europe as a market for its goods and as a source of technology, especially given the dire state of its relations with America. The ratification of the Comprehensive Agreement on Investment at the EU Parliament would also provide China a political and economic win on the global stage. Yet China’s political chauvinism has impeded it from advancing relations with the EU—to America’s benefit.

China is giving the U.S. breathing room to get back into the trade game and position itself for long-term competition with China. The U.S. should take greater advantage of the opening.

Have an opinion about this article? To sound off, please email letters@DailySignal.com, and we’ll consider publishing your edited remarks in our regular “We Hear You” feature. Remember to include the URL or headline of the article plus your name and town and/or state.