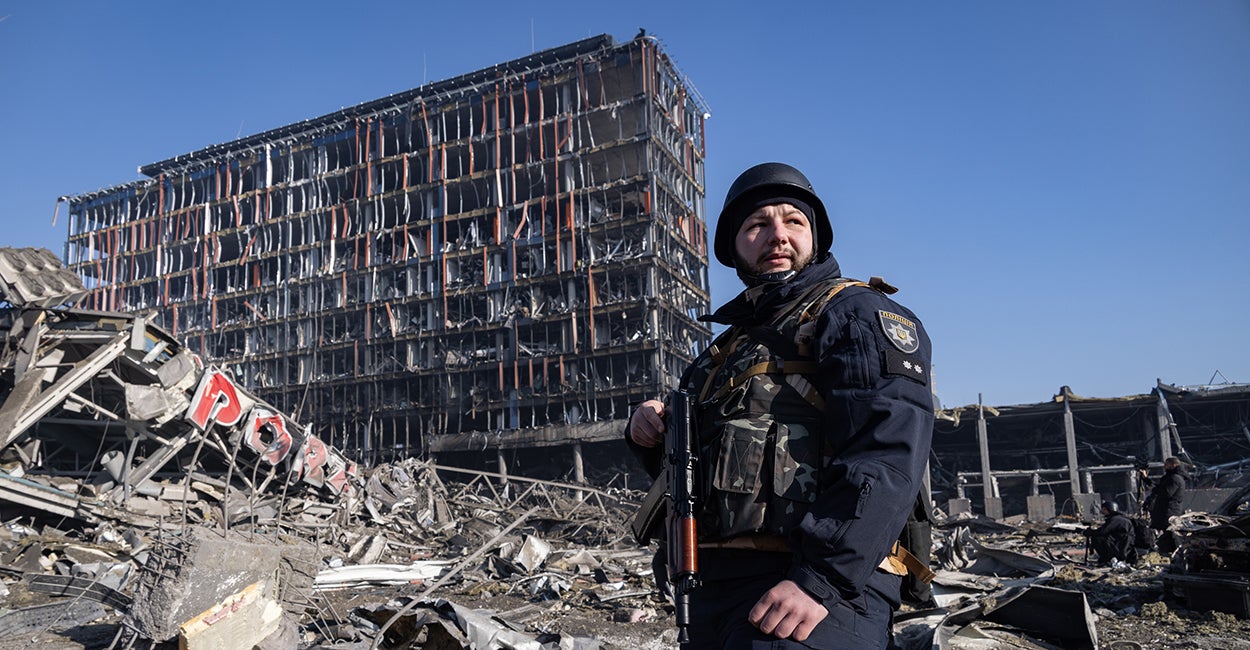 This adage, a variation of the Pottery Barn Rule, was first coined by columnist Thomas L. Friedman in 2003.

Friedman used it as an expression of foreign policy, suggesting that the launch of a military invasion comes with the responsibility of rebuilding a country. The adage now certainly applies to Russia in the Ukraine-Russia conflict.

“You are going to be the proud owner of 25 million people. You will own all their hopes, aspirations, and problems. You’ll own it all,” Powell told Bush prior to the Iraq War.

Today, the destruction of the Ukraine-Russia conflict weighs on everyone’s mind. Vladimir Putin’s regime must be made to pay for that destruction, not just through sanctions, but also through the seizure of hundreds of billions of dollars in Russian assets located in the West and around the world.

Without argument, Russia has invaded Ukraine and commenced a full-scale assault on its people, infrastructure, and culture.

The Russians have killed thousands of Ukrainian men, women, and children. Putin’s regime has not stopped at killing Ukrainian soldiers, but it likely has committed war crimes, indiscriminately targeting noncombatant civilians.

Since the invasion began, over 2,400 civilians have been senselessly killed in the city of Mariupol alone.

It is tough to process pictures like the one taken of a pregnant woman being carried away on a stretcher after Russian bombs shelled a maternity hospital there.

Now, the remaining civilians in Mariupol are forced to survive in the rubble, enduring freezing temperatures without access to heat, potable water, or adequate food supply.

Mariupol is not the only Ukrainian city to be pounded by Russian bombs and shells. Far from it. Other major cities, including Kyiv, Kharkiv, and Mykolaiv continue to face constant bombardment and artillery barrages, losing roads, bridges, hospitals, equipment, and other important assets in the process.

The war has been an economic and humanitarian disaster for Ukraine.

Fifty percent of all Ukrainian businesses have been shut down and almost all exports from the country have been completely halted.

Ukraine’s major seaports and airports have been closed and damaged. The ports to the Black Sea and the Sea of Azov are being strong-armed by Russian naval fleets.

Any use of roads for trade and commerce is almost impossible due to the nearly 3 million refugees fleeing from Russian barbarism.

The damage in Ukraine, however, is far greater than any monetary value any economist could estimate. The thousands of lives lost in this conflict already attest to that.

But for those who will eventually return to Ukraine seeking to rebuild their homeland, they also will have to endure the loss of symbols that represented their history, culture, and heritage.

In Kharkiv, the Russians destroyed Freedom Square, the Palace of Industry, the Kharkiv State Academic Opera and Ballet Theatre, and the Kharkiv Philharmonic.

Twenty-five paintings by famous Ukrainian folk artist Maria Pyrimachenko were lost after the Russians destroyed a museum in Ivankiv.

Many Ukrainian churches have also been reduced to rubble.

It is truly sad to see the tragic effects Russian aggression will have on Ukraine for years to come—the lives, prosperity, and cultural heritage that Putin’s forces have destroyed.

At the end of this war, the world must not forget what Russia has done to Ukraine. World leaders need to take a hardline stance against Russia and punish them for the actions that they have committed.

The West has a responsibility to hold Russia accountable via sanctions, and they must not be lifted until Ukraine is made whole. Russian assets in the West, including the country’s central bank reserves and the property of oligarchs, could be seized and used to pay for the damages to Ukraine.

Eventual peace negotiations on how the war ends are between Ukraine and Russia. However, akin to Germany after World War I and the Axis Powers after World War II, Russia should pay war reparations to Ukraine.

In this present era of foreign policy, Friedman’s Pottery Barn Rule should be interpreted as “You break it, you buy it.” Russia is “breaking” Ukraine, and they should be on the hook for “buying” it—bringing it back to whole, and then some.

Powell’s words to Bush should be refitted and applied to Putin:

“You are the invader of 44 million people. You will pay for the loss of innocent lives, the devastation of economic infrastructure, and the desecration of cultural symbols. You’ll pay for it all.”

Have an opinion about this article? To sound off, please email [email protected] and we’ll consider publishing your edited remarks in our regular “We Hear You” feature. Remember to include the URL or headline of the article plus your name and town and/or state.