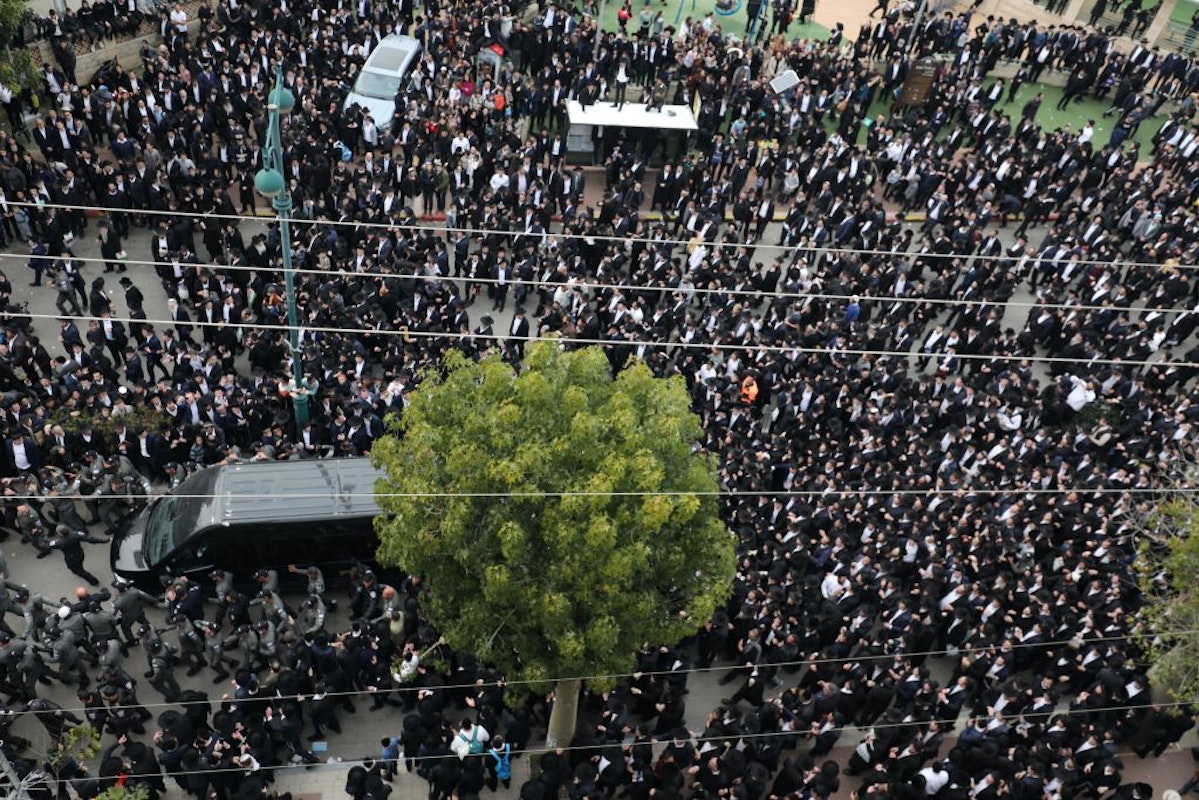 Between 750,000 and one million people flocked to Bnei Brak on Sunday for the funeral procession of Israel’s most influential Haredi (ultra-Orthodox) Rabbi and Torah leader Rabbi Chaim Kanievsky, according to police estimates. Rabbi Kanievsky, known as the “Prince of Torah,” passed away in his Bnei Brak home on Friday afternoon at the age of 94 and was considered the premier Torah leader for Jews in Israel and around the world. Leading rabbis and community leaders issued a proclamation that businesses and schools be closed at the time of the funeral to honor Rabbi Kanievsky.

“As many as 1 million mourners attended the funeral of the leader of the haredi Orthodox community, Rabbi Chaim Kanievsky, on Sunday afternoon in the central Israeli city of Bnei Brak, making it the largest funeral in Israel’s history,” JTA reported.

Rabbi Kanievsky was born in 1928 in Pinsk, Poland, in what is now Belarus, to Rabbi Yaakov Yisrael Kanievsky, known as the “Steipler Gaon,” and Rebbitzen Miriam Karelitz, sister of Rabbi Avraham Yeshayahu Karelitz, known as the “Chazon Ish.” He moved to Israel (then Mandatory Palestine) as a young child and never left. Even as a young man, he was supremely dedicated to Torah study, spending many hours immersed in Torah Books. During Israel’s War of Independence, Kanievsky served in the IDF, guarding an outpost overlooking Jaffa.

Rabbi Kanievsky studied for around seventeen hours daily and gained expertise in virtually every aspect of Torah. He astonishingly completed the entire Torah yearly, which includes the Pentateuch, Prophets, Writings, Mishnah, Babylonian and Jerusalem Talmud, Medrash, Sifra, Sifri, Miamonodies, Zohar, Shulchan Aruch, and many more Torah Books, a feat that most Jews don’t complete in their lifetime. He authored many books on all topics of Judaism and selflessly dedicated hours of his time to answering questions from people around the globe, writing out untold thousands of responses to the letters that poured in over the decades.

The following story, told over by Rabbi Nosson Scherman of Artscroll, illustrates the depth of Rabbi Kanievsky’s Torah knowledge. Once, when asked “how many times is the name of Moses mentioned in the Torah?” he did a mental tally and answered that Moses appears 97 times. When he was told that a computer had tallied 99 mentions, Rabbi Kanievsky pointed out that the extra two words utilized the same Hebrew letters as Moses but that they had completely different meanings.

He lived a life of utter simplicity from his tiny apartment in Bnei Brak, completely uninterested in luxuries or even comforts. Despite his widespread renown, he never sought or accepted any formal position as the head of an institution or the rabbi of a community; still, many in the Religious Jewish community considered him to be the final say in all matters related to the Jewish people worldwide.

The Israeli police and the Bnei Brak municipality took every effort to maintain safety at what was likely the largest funeral in Israeli history. Israeli Prime Minister Naftali Bennett implored the public before the funeral that “We must make sure that [the funeral] does not end in a mass disaster. The trauma of the Meron disaster is still fresh in all of us, this tragedy must not be repeated. I ask everyone to take personal responsibility.” Public Security Minister Omer Barlev said the funeral will be “an event the magnitude of which we have not encountered before.”

✡️🕯 — UPDATE: In a letter, Reb Chaim Zatzal’s Brother in law, Hagaon Reb Yitzchok Zilbershtein urged people not to get too close to the Mita during the Levaya, in order to prevent a tragedy. pic.twitter.com/Aw2CnsFJng

In central Israel, major highways and routes, as well as the entrance and exit from Bnei Brak, were closed to private traffic. Thousands of extra buses and trains were made available for those who wished to come to the funeral. Approximately 3,000 IDF Home Front Command police officers, medics, and soldiers were stationed at and near the funeral.

“The funeral passed with no serious incidents, and the hundreds of EMTs and Paramedics who had been out in the field since the early hours of the morning treated minor ailments only, such as weakness, faints or minor injuries,” said Magen David Adom’s Eli Bin, director-general of Israel’s National Rescue Service.

Rabbi Kanievsky was eulogized by his son Rabbi Shlomo Kanievsky at the funeral, who shared personal memories from his childhood home. “My father always made sure to honor my mother in every way. My mother always had Lunch prepared when my father arrived after studying in yeshiva, however, he would never eat without her; he would only eat if she was seated at the table with him. If she wasn’t ready, he would wait for her. These seemingly insignificant gestures reflected my father’s way of life and his devotion to the things that truly mattered.”

The funeral was attended by Israelis of all backgrounds. Many tore their garments in mourning, treating the loss of Rabbi Kanievsky as their personal loss. “It still hasn’t hit home,” said Binyomin Biron, a resident of Modiin Illit who attended the funeral with his children, “We always relied on being able to seek his guidance for all matters, now who will we turn to for sage advice?” Shlomo Meir Eisenmann of Jerusalem said he made the effort to attend “to pay my last respects to someone who devoted his life to Torah study, an expert in every aspect of the Torah, a master scholar, and a Torah giant. I wanted to witness and be a part of one of the largest events in Israeli history and that this event was about honoring the importance of Torah study shows what is valued here in Israel.”

✡️🕯 — PHOTO: Tens of Thousands gather in the streets of Bnei Brak for the Levaya of the Gadol Hador Zatzal, to begin in 35 minutes. pic.twitter.com/CvyJonBNWP

✡️ — PHOTO: Moments after arriving back from Paris, Israeli President Isaac Herzog is now paying a Shiva visit at the Kanievsky home on in Bnei Brak. pic.twitter.com/ShtpONYONi

The loss wasn’t just felt in Israel; thousands around the world watched the funeral via livestream and memorial services and eulogies were held in communities across the USA, Canada, Europe, South Africa, and Australia. “This loss isn’t just a loss for the city of Bnei Brak or for the State of Israel,” said Rabbi Zecharia Rubin, Rabbi at Ahavas Torah Center, Henderson, NV. “Rabbi Kanievsky was beloved by Jews all over the world and his loss will be felt and memorialized by Jewish communities worldwide.”

“He was a universal Torah leader,” said Osniel Rozen of Lakewood NJ, “Each segment of religious Judaism respected him and considered him their own.” “Religious Jews value deep scholarship,” said Yehoshua Yankelewitz of Jerusalem, “Rabbi Kanievsky was by far the greatest scholar of Torah in this generation. He was the ‘Babe Ruth’ of Torah study, and no one will come close to the dedication and devotion he put into his studies. That is why his death is such a loss and why so many people around the world are honoring him. May his memory be a blessing.”