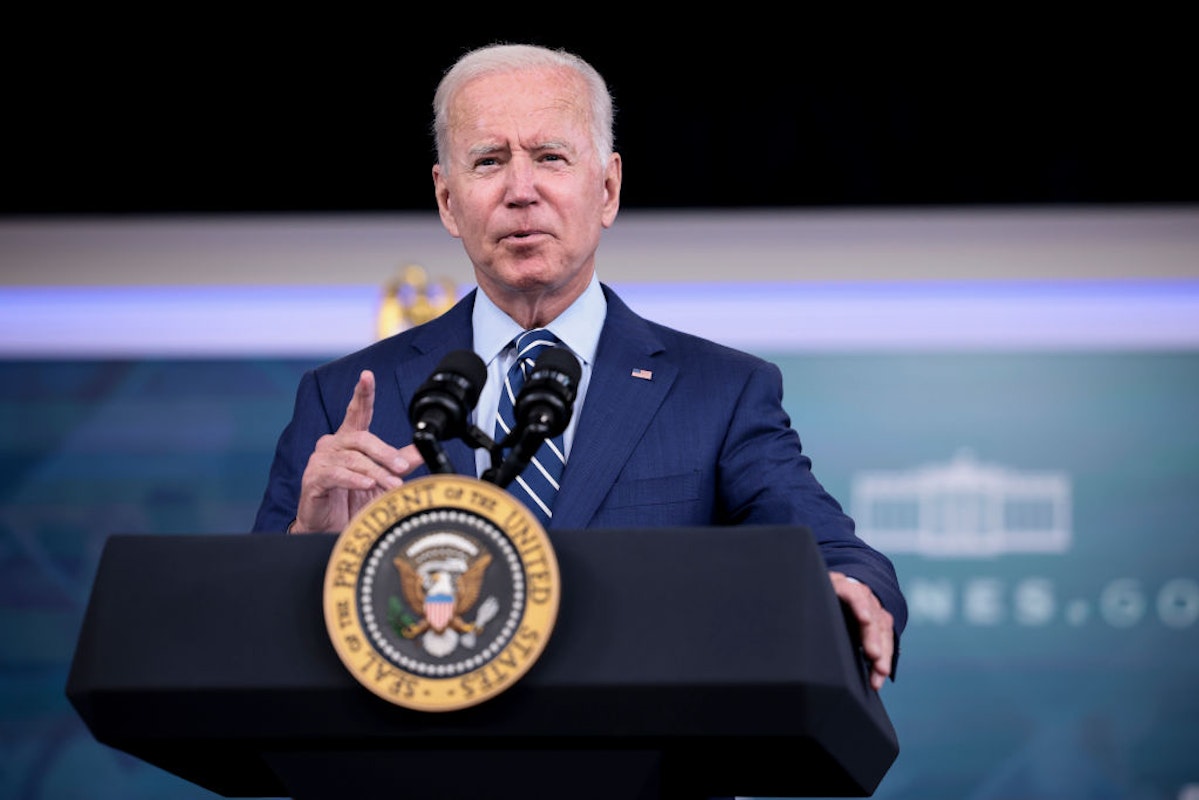 On Friday, President Joe Biden claimed he inherited a lot of problems when he took office as a response to questions regarding the numerous crises facing Americans.

“Take a look at what I inherited when I came into office, the state of affairs and where we were. We had 4 million people vaccinated, we had no plan — I could go down the list. So part of it is dealing with the panoply of things that landed on my plate. I’m not complaining, it’s just the reality,” Biden said.

The only thing Biden listed as something he inherited was a lower number of people who had received the COVID-19 vaccine. The first COVID-19 vaccine was given in mid-December 2020, a little more than a month before Biden took office on January 20, 2021. Of course there would be a lower number of people vaccinated back then than there are now, especially considering the vaccines had only been available for a month and were available to particularly at-risk populations at the time. It was not just four million people, as Biden claimed, but 17 million.

By the time Biden took office, the U.S. was averaging nearly one million people a day getting vaccinated, well on track to meet Biden’s promise of 100 million Americans vaccinated in the first 100 days of his presidency. Biden didn’t end up meeting that goal, but he came pretty close.

Biden also claimed in his comments that he didn’t inherit a vaccine distribution plan. This has already been debunked, as the Trump administration was distributing vaccines to the states and had a publicly available plan on the Health and Human Services Department website.

The problem with Biden’s attempt to shift the blame from his administration for various crises is that the situations Americans now face weren’t inherited from the Trump administration.

Here’s what Biden did inherit from Trump when it comes to the vaccines: Three working vaccines that were developed at an unprecedented speed and a distribution plan to get them to Americans. All Biden had to do was distribute the vaccines and nail the messaging, but his administration quickly lost the message when officials, including Biden himself, kept wearing a mask and encouraging even the vaccinated to do so after the vaccine had been promised as a roadmap back to a normal life.

The current border crisis, for example, has a lot to do with Biden’s rejection of many Trump-era border policies that kept the wave of illegal immigration below current levels. To be fair, Trump dealt with numerous migrant caravans as the U.S. economy picked up, but his deterrent policies worked to keep the situation from exploding. By contrast, tens of thousands more are illegally crossing our border now because of Biden’s signals that he would not follow Trump’s lead on the border. Indeed, just last week Homeland Security Secretary Alejandro Mayorkas boasted that the Biden administration has “rescinded so many Trump immigration policies.”

“So, we have rescinded so many Trump immigration policies, it would take so much time to list them,” Mayorkas said in response to a question from Fox News’ Chris Wallace. “We rescinded the remain in Mexico policy. We rescinded, of course, the public charge rule that deprived, vulnerable migrants from accessing certain critical life benefits. We have restored the Deferred Action for Childhood Arrivals program, the DACA program.”

Mayorkas made his comments while estimates of 15,000 Haitian migrants camped under a bridge in Del Rio, Texas, in the sweltering heat. Mayorkas admitted over the weekend that some 12,000 illegal immigrants from the camp had been released into the U.S. He also acknowledged that the illegal immigrants were not tested for COVID-19.

“We did not test that population of individuals,” Mayorkas told reporters on Friday. “We do not know, I do not know, I should say if I may be perfectly accurate, I do not know if anyone was sick with COVID. We certainly had some people get sick, not with COVID to my knowledge and we addressed their illnesses.”

Biden has repeatedly blamed his disastrous withdrawal of troops, Americans, and Afghan allies with proper visas from Afghanistan on the Trump administration’s withdrawal deal made in 2020. Since Biden has repeatedly ignored or reversed numerous Trump polices, there is no reason to believe this was the one thing he was bound to from the previous administration. It is true that the Trump deal with the Taliban set a May 1 deadline for the withdrawal, but Biden pushed that date back first to September 11, but then to August 31 after a significant backlash. How was Biden bound to the withdrawal deal but not to the specific withdrawal date?

“The Trump administration developed a conditions-based withdrawal. According to this plan, no final withdrawal would have occurred until final successful peace negotiations took place between the Taliban and the Ghani government,” wrote former National Security Council chief of staff Keith Kellogg, former Director of National Intelligence John Ratcliffe, and former Department of Homeland Security acting Secretary Chad Wolf in a statement published in August. “President Trump personally engaged with Mullah Abdul Ghani Baradar, who led the Taliban delegation, and clearly laid out what would happen in the event of any Taliban intransigence.”

And while Biden repeatedly tried to paint opposition to his withdrawal as opposition to the withdrawal itself, that is untrue. Millions of Americans agreed that the war needed to end, but felt the Biden administration badly bungled the withdrawal, with many Americans and Afghan allies still trapped in the country after they were left behind by Biden’s self-imposed deadline. Biden’s withdrawal was so chaotic that Afghans fell to their deaths while clinging to the wheels of airplanes evacuating people from the country as the Taliban took over. It was reminiscent of Saigon, even though the administration claimed otherwise.

The Trump administration stayed away from issuing federal mandates, including vaccine mandates. The Biden administration has leaned heavily on states and industries to mandate the vaccine for workers and has instituted a requirement for federal workers.

The U.S. is falling behind other countries in the percentage of the population that is vaccinated, but there are several reasons for this, and some of them come from the Biden administration itself. As mentioned earlier, the Biden administration initially said the vaccines would lead to normal life, but even after the president and other world leaders and officials were vaccinated, they continued to wear masks and act as if nothing had changed, leading many to wonder if the vaccines were worth it. Instead of admitting we would have to live with COVID-19 and that the vaccines would mitigate severe symptoms, breakthrough cases led to large parts of the country locked down and afraid, with many wondering whether this administration and governors across the country will only give Americans their freedoms back if COVID-19 were ever eradicated, an impossible goal.