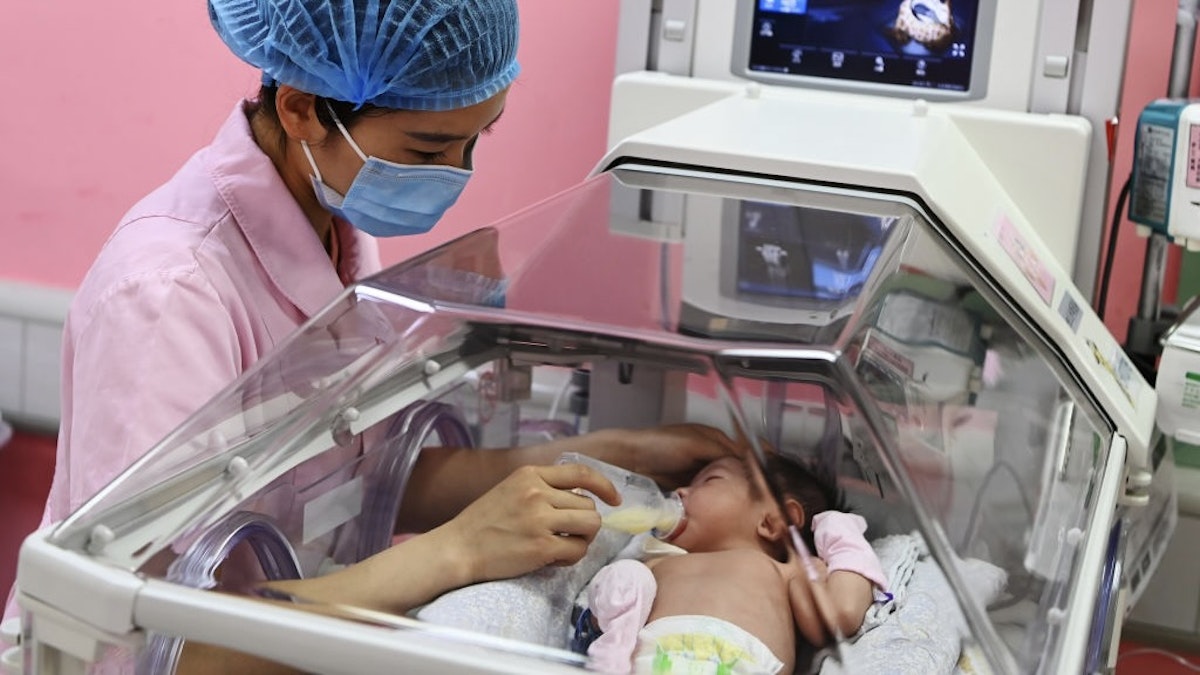 China is taking steps to cut back on abortions in the country amid a potential crisis from its dramatically low birth rate.

The Wall Street Journal reported that a new plan by the China Family Planning Association described a “campaign of intervention” to cut down on unplanned pregnancies and abortions when it comes to teens and unmarried women. It noted the goal was to “improve reproductive health.”

“The plan, posted on the association’s website, was dated Jan. 28 and has been referred to in some Chinese media in recent days,” the Journal noted. The plan also said it was important to “reshape the parenting culture of multichild families.”

According to South China Morning Post, the plan also pushes for pilot public health programs to encourage people to have multiple children.

According to its plan, the association aims to tackle the problem through efforts to foster a “positive” family culture of marriage and multiple children. It aims to do this with education programmes, providing better prenatal and postnatal care, encouraging both parents to share childcare responsibility, and stamping out the traditional practice of grooms paying hefty “bride prices”.

China historically had an infamous one-child policy where couples were only allowed to have one child, but it has since shifted its stance and now allows couples to have three children. However, the change in government allowance hasn’t drastically increased the birth rate in the country.

As The Daily Wire reported last month, China’s birth rate for 2021 dropped to historic lows, declining for the fifth year in a row, creating the potential for an economic and cultural crisis in the country.

Reuters reported that the “2021 rate of 7.52 births per 1,000 people was the lowest since 1949, when the National Statistics Bureau began collating the data, adding further pressure on officials to encourage more births.”

“The natural growth rate of China’s population, which excludes migration, was only 0.034% for 2021, the lowest since 1960, according to the data,” the outlet added.

The Journal noted that in 1991, a time which saw many of the most horrific forms of enforcement of the government’s birth restrictions, around 14 million abortions were performed in China. In 2020, the figure was just below nine million abortions. That same year, China had 12 million births.

Some have also pointed out that the heavy use of abortions in China might be contributing to the country’s high infertility rate when compared to other countries. According to a national reproductive health survey, China’s infertility rate in 2020 was 18%. However, “[g]lobally, the rate increased from 11 per cent in 1997 to 15.4 per cent in 2018, according to a report by US consulting firm Frost & Sullivan,” per the South China Morning Post.

The announcement of the plan has also raised concerns among some that China could outlaw abortions entirely, due to the fact that the country implemented forced abortions under its one-child policy.

“What is clear from the document is that the Chinese government is encouraging births and trying to reduce abortions,” Wang Yaqiu, a senior researcher on China at Human Rights Watch, said, per the Post. “Given its history of restricting women’s reproductive rights and bodily autonomy through abusive means … [these measures are] certainly a cause for concern.”

Wang Yaqiu noted how it is not clear how the plan will be carried out.

While abortion is currently legal in China, the government released guidance last year pushing for the reduction of abortions that were “medically unnecessary.”

The Journal reported that single mothers in China are also not provided many benefits that married mothers are given. For example, women must supply marriage certificates to have regular pregnancy appointments or deliver their baby at the majority of public hospitals. Single mothers are also many times not given paid maternity leave.