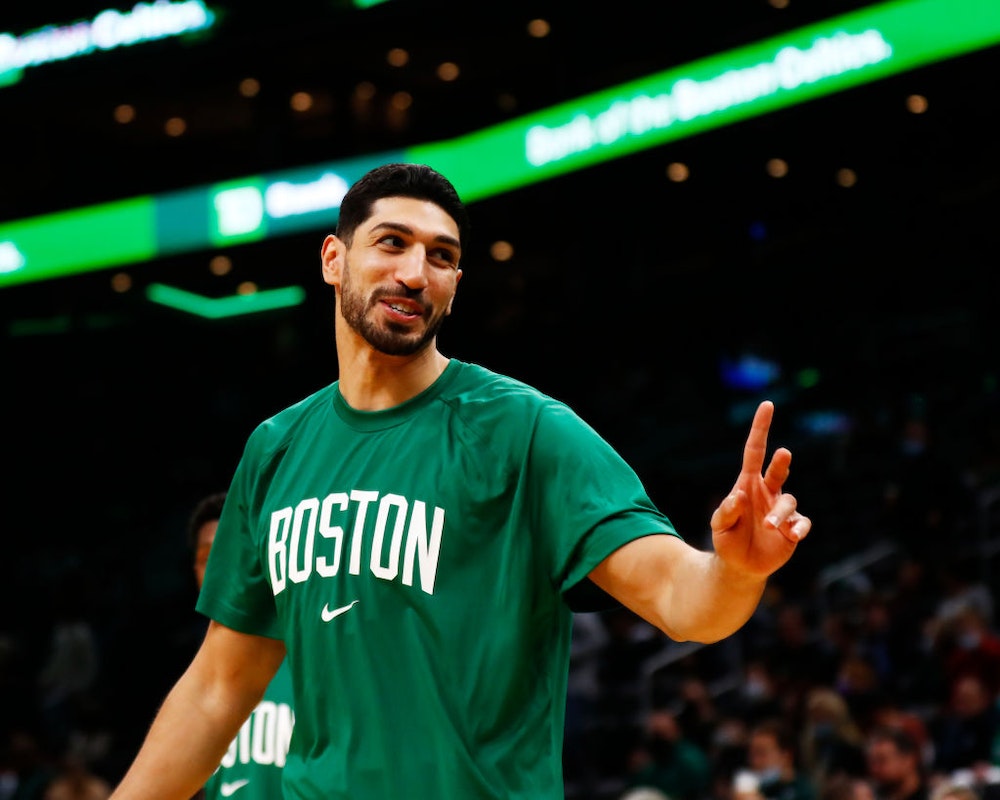 Sponsored by the Foundation for Individual Rights in Education (FIRE), the ad depicts Kanter Freedom wearing a shirt that says “Free Tibet, Free Taiwan, Free Hong Kong, Free Uyghurs” — an apparent slight against the Chinese government, which is hosting the Games.

“I remember the first time coming to America,” Kanter Freedom explains. “One of my teammates criticized the president and I said, ‘Dude, what are you doing? They might put you in jail.’ And he said, ‘This is America.’ And he explained to me what freedom of speech means. … Unfortunately if you use your free speech in Turkey, you’ll end up in jail.”

Kanter Freedom recounts that Turkish authorities revoked his passport and jailed his father when he started speaking against his home country’s government. The Boston Celtics player legally changed his last name to “Freedom” in 2021 as he prepared to become an American citizen.

“People should feel very lucky and blessed to be in a country like America where there’s human rights,” he continues. “And obviously, America is having her own problems. But change can only happen in America with freedom of speech. And without freedom, we cannot do anything.”

“Freedom begins with the freedom to speak,” FIRE vice president of communications Nico Perrino said about the advertisement. “Authoritarians across the globe use censorship to stay in power and conceal their abuses. We need a culture supportive of free speech to stop them. That’s why Enes’ message that change can only happen with freedom of speech is so powerful.”

Kanter Freedom has repeatedly called upon Chinese authorities to ensure a free Tibet, an independent Taiwan, and a stop to the extermination of the Uyghur people. He also challenged President Joe Biden to “stop playing games with bullies” ahead of a meeting with Chinese President Xi Jinping.

“Heartless dictator of China, Xi Jinping, and the Communist Party of China, I’m calling you out right now in front of the whole world,” Freedom said in a video posted to social media. “Close down the slave labor camps and free the Uyghur people. Stop the genocide now.”

Kanter Freedom also blasted former NBA player Jeremy Lin for participating in the Chinese Basketball Association. “Shame on you [Jeremy Lin],” Freedom posted to social media. “Haven’t you had enough of that Dirty Chinese Communist Party money feeding you to stay silent? How disgusting of you to turn your back against your country & your people. Stand with Taiwan! Stop bowing to money & the Dictatorship. Morals over Money brother.”

More recently, Eileen Gu — an American-born skier born and raised in San Francisco — chose to compete for her mother’s home country of China in the Winter Olympics. After she clinched the gold for the communist superpower, she defended her choice to compete against the United States.

“I’ve always been super outspoken about my gratitude to the U.S., especially the U.S. team,” Gu said when asked if she had to give up her American citizenship to compete for China. “I feel as though they’ve helped me out so much in my development, they continue to support me. And same with the Chinese team. They’ve always been super supportive and they’ve helped me so much. And so in that sense, I think that that speaks volumes to the ability of sport to bridge the gap and to be a force for unity.”