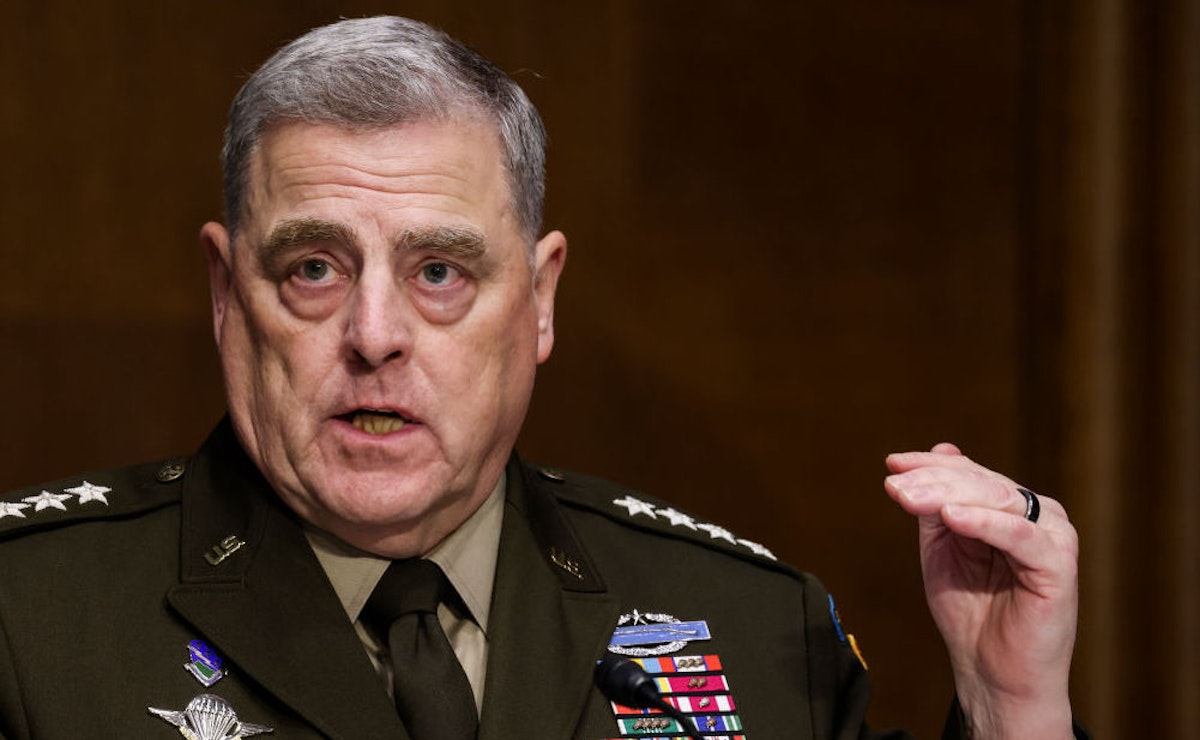 Several Republican senators have requested more time to question General Mark Milley, chairman of the joint chiefs of staff, and military leaders when they appear before a congressional panel next week. The hearing, scheduled for September 28, will be the first time lawmakers will publicly question Milley over President Joe Biden’s bungled Afghanistan withdrawal.

The committee will also hear from Secretary of Defense Lloyd Austin and General Kenneth McKenzie of U.S. Central Command.

The letter was signed by Senators Josh Hawley (R-MO), Kevin Kramer (R-ND), Rick Scott (R-FL), Tom Cotton (R-AR) and Tommy Tuberville (R-AL), and argued that the “standard practice” of five minutes of questions per lawmakers wouldn’t offer enough time to get accountability for the public. The lawmakers in the letter request two rounds of questioning, minimum.

“The Biden administration’s mishandling of America’s withdrawal from Afghanistan was as disastrous as it was unnecessary. For years, we have known that the Afghan security forces would struggle to hold off the Taliban after we withdrew our forces. It should therefore have come as no surprise that the Afghan forces collapsed rapidly following our withdrawal,” wrote the five Republican senators in the letter, addressed to the chairman of the Armed Services Committee. “Yet the Administration failed to plan effectively for this eventuality. Instead, they assumed that the Afghan forces would be able and willing to hold off the Taliban for weeks if not longer after we left. Rather than planning for the worst, they planned for the best – and we have seen the results.”

“Now it is time for accountability. The American people want to know how the Administration – including the Department of Defense – failed to prepare for the collapse of the Afghan forces and allowed itself to be blindsided by the Taliban’s final advance,” they wrote. “They want to know when, why, and by whom the decisions were made that led to thirteen American lives lost, hundreds of Americans stranded behind enemy lines, and tens of thousands of refugees coming to our nation without proper vetting. And they want those responsible to face consequences for their actions.”

“The hearing on September 28th offers an opportunity to begin the process of accountability for the disastrous withdrawal from Afghanistan. That process can only begin, though, if members are given the time required to ask tough questions of the witnesses before them,” the group added.

The Biden administration has been criticized for how they projected and predicted the situation in Afghanistan. In early July, Biden said there would be “no circumstances” under which people would be lifted off the rooftop of the U.S. embassy in Kabul, the country’s capital. In mid-July, Milley said there were a “​​range of possible outcomes” for the future of Afghanistan, and although the Taliban appeared to have “strategic advantage,” the possibility of them taking over was not a “foregone conclusion.”

But the capital city fell to the Taliban mere weeks later, even as the United States continued to evacuate embassy staff, Afghan allies, and military personnel.

With the Taliban in control, desperate Afghans crowded around the Hamid Karzai International airport, some even clinging to departing military planes and falling to their deaths. Some would-be evacuees reportedly struggled to reach the airport at all, and a number of Americans — it’s unclear how many — were left behind when the U.S. finally departed the country.

The Republican senators appear intent on focusing on the Afghanistan pull-out during their questioning.

Days ahead of the withdrawal deadline, an ISIS-K terrorist detonated a bomb outside Kabul’s airport gate. The terror attack killed thirteen U.S. service members, over a hundred Afghans, and injured other American servicemen as well. (As of September 22, 2021, four Marines remain hospitalized; as of Tuesday, September 21, three in serious but stable condition and one in “very serious but stable condition,” according to a Marine Corps spokesperson Captain Johnny Henderson.)

The U.S. military, anticipating another terrorist attack, later authorized a drone strike on August 29 against what they said was an imminent threat — something that was later revealed to not have been the case. Milley, specifically, defended the drone strike in comments on September 1.

“At the time, and I think this is still valid, we had very good intelligence that ISIS-K was preparing a specific-type vehicle at a specific-type location. We monitored that through various means, and all of the engagement criteria were being met, and we went through the same level of rigor that we’ve done for years and we took a strike,” said Milley.

He called one of those killed an “ISIS facilitator,” and claimed there was a secondary explosion after the hit, meaning it could reasonably be said that explosives were in the car. “Were there others killed? Yes. There are others killed. Who they are — we don’t know, we’ll try to sort through all that, but we believe that the procedures at this point — I don’t want to influence the outcome of an investigation — but at this point we think that the procedures were correctly followed and it’s a righteous strike,” said Milley.

But on September 10, a New York Times investigation found that the drone strike didn’t appear to have killed an ISIS terrorist, but rather Zemari Ahmadi, a man who worked for a U.S. aid group. Up to seven children were also killed, all from the same extended family, including a 2-year-old, a 3-year-old, and a 6-year-old, according to The Washington Post. Following the Times’ report, the Pentagon admitted that the man was not a terror threat, and that there was no secondary explosion after the strike.

U.S. officials say they are looking at possibly making payments to the victims’ family. As of last week, the family was saying that they hadn’t heard from any U.S. officials, nor had any offered them an apology.