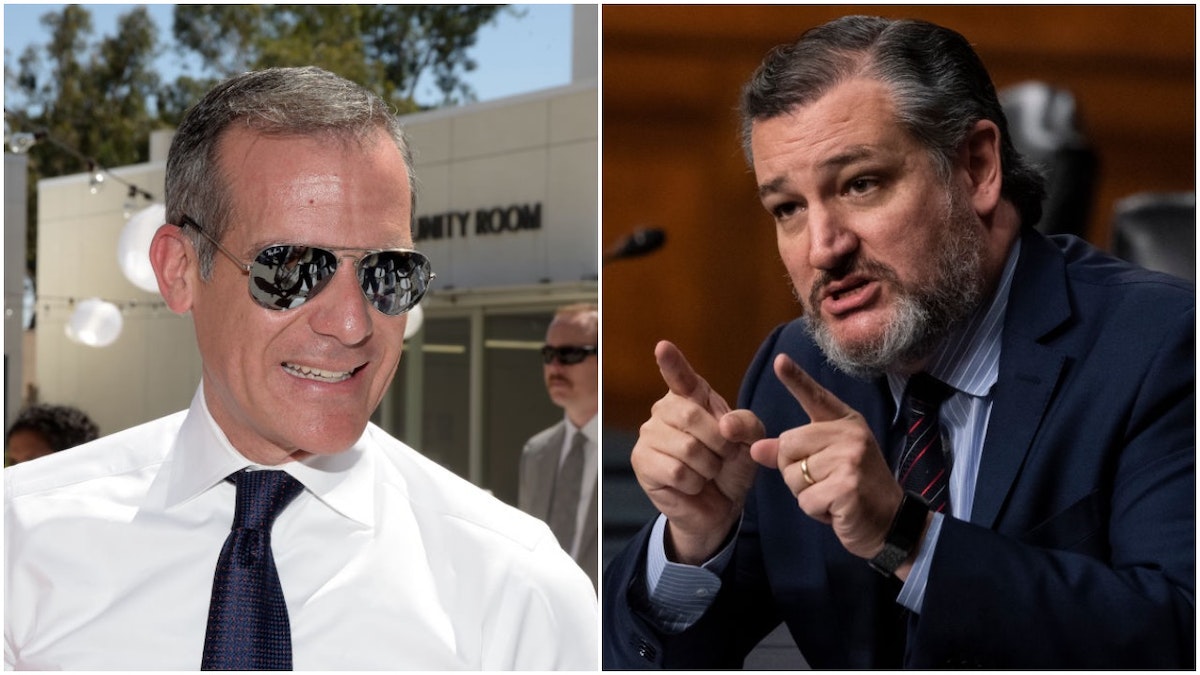 On Sunday night, Senator Ted Cruz (R-TX) mocked Los Angeles Democrat mayor Eric Garcetti after a photo showed him going maskless at the Super Bowl. Last Wednesday, Garcetti had insisted that when he went maskless at SoFi Stadium the previous weekend for the NFC Championship game, he was “holding his breath.”

Seeing the photo of Garcetti maskless at the Super Bowl, Cruz tweeted, “He’s really good at holding his breath.”

SoFi Stadium’s rules dictate that masks are required indoors and outdoors during events with more than 5,000 people.

Last Wednesday, asked about photos of him maskless with Los Angeles Lakers icon Earvin “Magic” Johnson, Garcetti stated, “I’ll take personal responsibility, and if it makes you and everyone else happy — or even the photographs with people where literally I’m holding my breath for two seconds — I won’t even do that,” Deadline reported.

“I wore my mask the entire game,” Garcetti protested. “When people ask for a photograph, I hold my breath and I put it here and people can see that. There is a zero percent chance of infection from that.”

He added, “I won’t pull it down for two seconds anymore — that’s easy. But to me, it is crystal clear that nobody has been endangered by that and I’m trying to model the good behavior of making sure we wear this (for the) entire game,” The Daily Mail noted.

Garcetti was widely mocked on social media after the NFC Championship game :

This isn’t hypocrisy. This keeps happening because the politicians who impose all these COVID rules and restrictions on everyone else see them as a useless joke, and that’s why they ignore them in their own lives and end up saying darkly hilarious things like this to justify it: https://t.co/Xfz16ZlR0L

these f*ckers will keep lying and nobody will care and your toddlers will have to be masked up in daycare forever. https://t.co/dm4iClqBFL

My 4-year-old still has to wear a mask outdoors at her Pre-K https://t.co/3bBjzIOKo5

Prior to the Super Bowl, Los Angeles Public Health Director Barbara Ferrer had said, “Transmission is super high here. And we’ve got to get to lower rates before it makes sense to be taking off our masks.”

“When asked why the SoFi mask requirement made sense, when millions of people have attended NFL games this year, including in places without strict mask rules, Ferrer didn’t answer directly. She suggested risk for transmission remained high in large venues, and emphasized that determining where a person became infected can often be difficult, if not impossible,” WDBJ7 reported on February 2.

Los Angeles County Supervisor Kathryn Barger had another perspective, asserting of masks, “They don’t make a difference when they’re not consistently followed or enforced. I strongly believe individuals should be allowed to make an informed choice about whether to mask up or not.”

Last week, Dr. Erica Pan, the deputy director for California’s Center for Infectious Diseases, told the California Medical Association, “We’re still recommending it while rates are high, and certainly in indoor settings, indoor crowded settings — especially if you don’t know people’s vaccination status,” the Los Angeles Times reported, adding that Ferrer stated last week, “I will say, unequivocally, that we should not be lifting the masking mandate when we’re reporting thousands and thousands of new cases every day.”

She added, “That doesn’t make sense to us here at Public Health.”