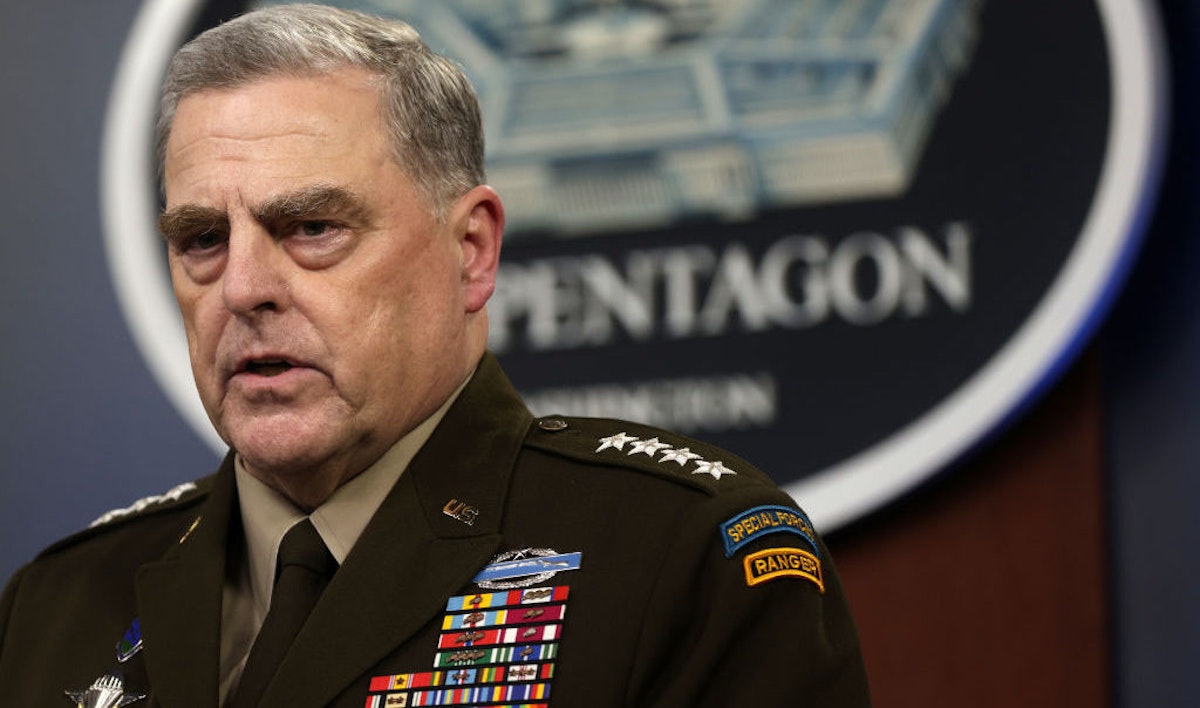 Gen. Mark Milley, the top military officer in the U.S., reportedly spoke with his Russian counterpart about an offer from the Kremlin to aid the U.S. in responding to terror threats in Afghanistan.

The Kremlin apparently offered the Biden administration the opportunity to let the U.S. military use Russian bases in the Middle East to respond to terror threats now that the U.S. has withdrawn its forces from Afghanistan, according to The Wall Street Journal. Gen. Mark Milley, chairman of the Joint Chiefs of Staff, contacted Russian Chief of General Staff Valery Gerasimov about the offer at the request of President Joe Biden and the U.S. National Security Council.

“The previously unreported exchange comes as the Biden administration is searching for ways to strengthen its capability to monitor and respond to potential terrorist dangers in Afghanistan now that U.S. forces have left the country,” WSJ reports.

“While the U.S. and Russia share concerns about the threat of terrorism, the idea of working with Russia on counterterrorism is fraught with challenges, particularly politically. Congress enacted legislation several years ago that precludes close cooperation between the U.S. and Russia militaries as long as Russian troops are in Ukraine, unless the secretary of defense issues a special waiver,” the outlet continued.

News about the Russian meeting comes as lawmakers prepare to hear testimony from Milley as well as Secretary of Defense Lloyd Austin on Tuesday over the Biden administration’s rapid and chaotic withdrawal from Afghanistan. Milley in particular is expected to face hard questions from lawmakers over his role in Afghanistan and his judgement over reported conversations he had with the Chinese in the final weeks of the Trump administration.

The Washington Post’s Bob Woodward and Robert Costa revealed that Milley had allegedly called his Chinese counterpart, Gen. Li Zuocheng, twice in the final months of the Trump administration. On the second call, Milley said he would send a warning if then-President Donald Trump ordered a surprise attack on the Chinese.

“General Li, I want to assure you that the American government is stable and everything is going to be okay,” Milley reportedly said. “We are not going to attack or conduct any kinetic operations against you.”

The Pentagon put out a statement defending Milley’s phone calls with the Chinese. A Pentagon spokesperson said:

The Chairman of the Joint Chiefs regularly communicates with the Chiefs of Defense across the world, including with China and Russia. These conversations remain vital to improving mutual understanding of U.S. national security interests, reducing tensions, providing clarity and avoiding unintended consequences or conflict.

His calls with the Chinese and others in October and January were in keeping with these duties and responsibilities conveying reassurance in order to maintain strategic stability. All calls from the Chairman to his counterparts, including those reported, are staffed, coordinated and communicated with the Department of Defense and the interagency.

Also in keeping with his responsibilities as senior military adviser to the President and Secretary of Defense, Milley frequently conducts meetings with uniformed leaders across the Services to ensure all leaders are aware of current issues. The meeting regarding nuclear weapons protocols was to remind uniformed leaders in the Pentagon of the long-established and robust procedures in light of media reporting on the subject.

General Milley continues to act and advise within his authority in the lawful tradition of civilian control of the military and his oath to the Constitution.