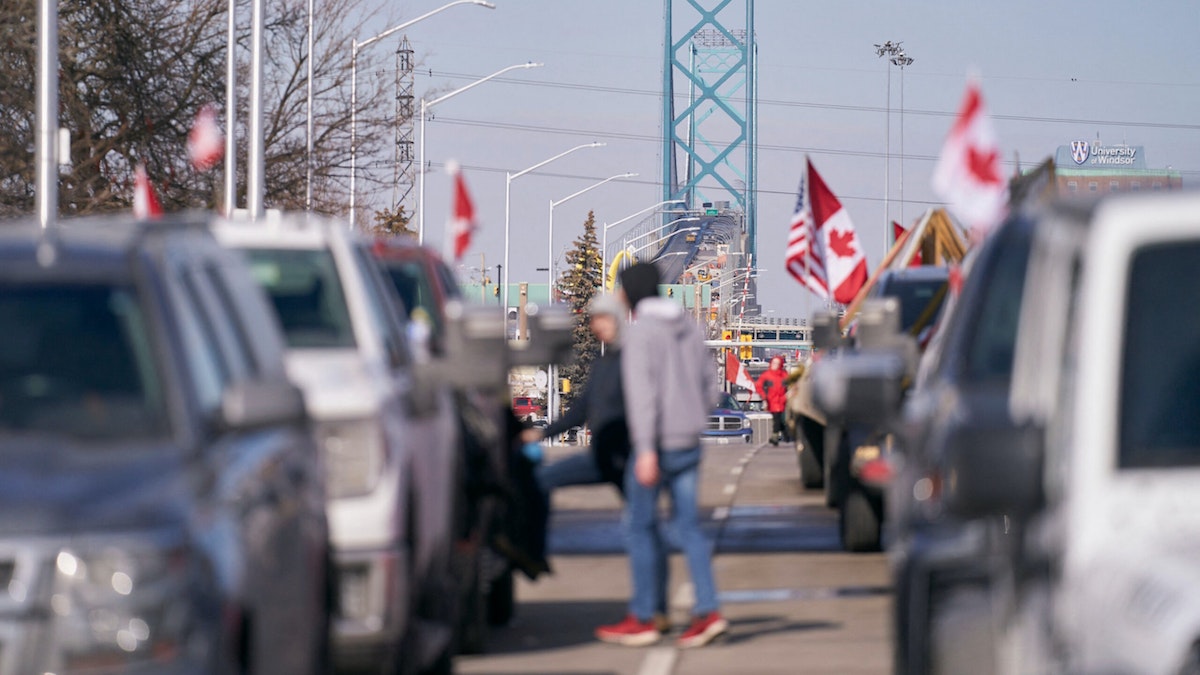 A 78-year-old man was arrested by Canadian police in Ottawa after honking his horn in support of the “Freedom Convoy,” then refusing to show his ID in a now-viral video.

Gerry Charlebois, a 4’10” father of four, grandfather of 11, and great grandfather of four, was grabbed by an Ottawa police officer and pinned against his minivan as he was arrested after allegedly honking his horn at a “Freedom Convoy” protestor, then “failing to ID.” The Toronto Sun’s Joe Warmington shared a video of the exchange on Twitter. “I spoke with him. He’s in pain. He’s 4 foot 10. A retired janitor with 11 grandkids, 4 great grandkids. If this disgraceful treatment of a 78 year old for honking his horn and a thumbs up to a trucker is acceptable to [Prime Minister Justin Trudeau] [Premier of Ontario Doug Ford] [Ottawa Mayor Jim Watson] no one is safe,” Warmington tweeted.

I spoke with him. He’s in pain. He’s 4 foot 10. A retired janitor with 11 grandkids, 4 great grandkids. If this disgraceful treatment of a 78 year old for honking his horn and a thumbs up to a trucker is acceptable to @JustinTrudeau @fordnation @JimWatsonOttawa no one is safe. https://t.co/DBgPLpCquX

The video shows a police officer grabbing Charlebois as several bystanders watch. “You’re under arrest,” the officer says to the old man. The bystander recording the video asks “What are you doing?” to the officer. “Failing to ID,” the officer snaps back, before knocking Charlebois to the ground and pinning him against his van. “That’s assault!” the bystanders shout. “I’ve got it all on video,” the man with the camera says.

Another officer advances on the bystanders, telling them to get back. The man holding the camera tries to tell the others not to say anything, but a bystander carrying a Canadian flag heckles the officers, calling one of them a “goon” and asking if they’re going to “attack” him. The other bystanders insist that they are being peaceful and get the heckler to calm down. The man holding the camera says the video is going to the media and YouTube, and he repeatedly asks the second officer for his name and badge number. “Look, they’re hurting an old man! A Canadian citizen!” the bystander shouts. “This is communism!”

A judge in Ontario issued a 10-day injunction banning individuals from honking their horns, as the protests have been ongoing for nearly two weeks.

Charlebois was upset by the incident. “I meant no harm,” he told the Toronto Sun in an interview on Tuesday. “I just gave the trucker a thumbs-up and a honk.” Charlebois did sustain bruises to his hand and arm because of the exchange. His family told the Toronto Sun that he was also experiencing pain in his shoulder and was going to be taken for X-rays. “I’m so sore,” Charlebois said. “It hurts so much.”

Charlebois explained that he drove to the site of the protest just to look at the trucks assembled in the city and was in fact planning to get out of his van and walk to Parliament Hill, where the demonstration is taking place, but he decided against it. “That’s why I put my wallet in the back of the van,” he said. “I was hoping to go in there, but when I got there I saw all of the commotion. I decided it was too much so I just looked from the van and then started to head home.” He said he was shocked that he was pulled over for honking. “When (the police) pulled me over, he told me I was in trouble for honking the horn.”

Charlebois was not charged criminally, but did receive a $118 ticket for “unnecessary noise.”

You can watch a longer version of the video here.

The Daily Wire’s new film SHUT IN is premiering on YouTube February 10th at 9 PM EST. Turn on reminders so you don’t miss it!