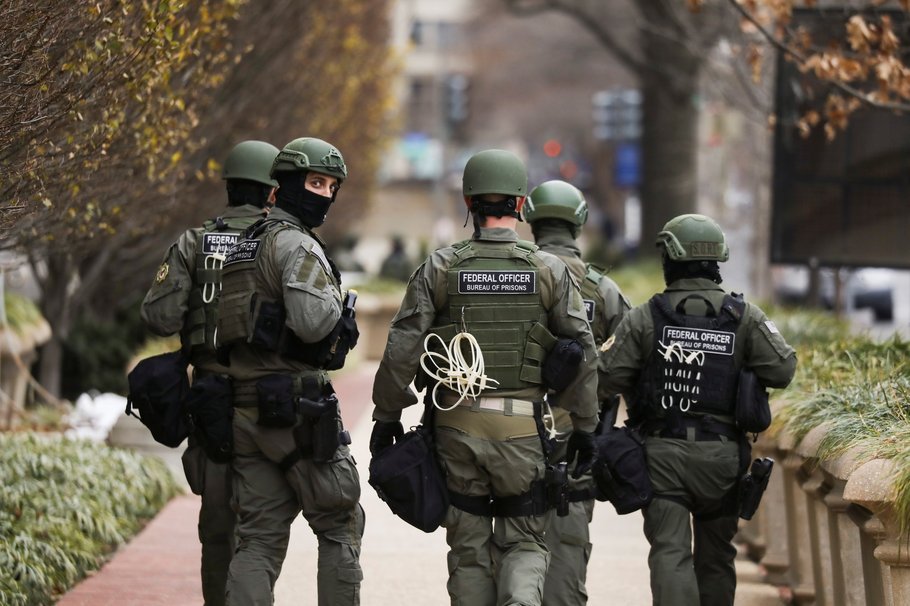 This article is cross-posted from U.S. Press Freedom Tracker.

In a Supreme Court term packed with controversial cases, one of the more-overlooked rulings has alarmed press freedom advocates as it gutted the legal mechanism used to hold federal officers liable for violating individuals’ constitutional rights.

The court ruled on partisan lines in Egbert v. Boule on June 8, 2022, significantly limiting the path for monetary damages following unlawful searches or excessive use of force and closing the door for First Amendment retaliation claims.

Reporters Committee for Freedom of the Press called the ruling an unfortunate blow to efforts to hold federal officers accountable. In its amicus brief to the court, it argued that the press is a “tempting target for federal officials seeking to retaliate against reporting on matters of public concern.” More than 30 media and advocacy organizations, including Freedom of the Press Foundation, signed on to the brief.

For documentary photographer Rian Dundon, the lawsuit he filed against more than 100 federal officers in April under similar precedents now faces an uncertain future.

Nicholas Kahl, an attorney representing Dundon, told the U.S. Press Freedom Tracker that Dundon’s suit aims to establish not only that the federal officers used excessive use of force but targeted Dundon because he is a journalist, in violation of the First Amendment.

“It isn’t about: Did this officer hit Rian? That’s obvious from the footage,” Kahl said. “The question is: Will we be able to get into why they did it? Will we be able to ask those questions? Will we get discovery on the motivations of the federal government in the policing of journalists around those protests and the Black Lives Matter movement?”

The majority of lawsuits filed by journalists have been against law enforcement agencies and officers at the state and local levels. While suits like Dundon’s are in the minority, the Tracker is aware of at least six other journalists suing federal officers, all of which now face a similarly limited path.

The case before the court involved Robert Boule, the owner of a bed-and-breakfast abutting the Canadian border in Washington, who alleged that a U.S. Customs and Border Protection officer assaulted and retaliated against him after he filed a complaint with the agency. Boule’s claims for damages were made under Bivens v. Six Unknown Named Agents of Federal Bureau of Narcotics, a 1971 Supreme Court case that established that federal officers can be personally sued and held financially liable for conducting unreasonable searches.

Gillian Vernick, a Technology and Press Freedom Project Fellow at RCFP who helped author the organization’s amicus brief in Boule, told the Tracker that circuit courts across the country have largely recognized that Bivens logically extends to First Amendment violations.

“It plays a critical role in deterring unconstitutional misconduct by federal officers and compensating for those damages. It’s really a severe consequence,” Vernick said.

The Court of Appeals for the 9th Circuit came to that conclusion in 2020 when ruling in favor of Boule’s assertion that his freedom of speech was violated.

While the Supreme Court initially extended the Bivens remedy — allowing for monetary damages in claims against federal employees — to include other constitutional violations over the last 50 years, it made clear in a 2017 case that further expansions were unlikely.

The ruling in Egbert v. Boule went further, all but overturning the initial Bivens ruling; Justice Neil Gorsuch wrote that he was prepared to do just that. Justice Clarence Thomas wrote in the majority decision that moving forward all federal courts must reject Bivens lawsuits if even one “rational reason” can be found to do so.

A dark, uncertain future for Bivens

In her dissent, Justice Sonia Sotomayor reasoned that while almost all such claims may be dismissed under this new standard, the Bivens decision remains a viable pathway for relief for some.

“Although today’s opinion will make it harder for plaintiffs to bring a successful Bivens claim, even in the Fourth Amendment context,” Sotomayor wrote, “the lower courts should not read it to render Bivens a dead letter.”

Margaret Russell, an associate professor of law at Santa Clara University, took a more dour perspective, telling the Tracker that plaintiffs will face far more than an uphill battle even when making excessive use of force claims and that the future of Bivens is clearly under threat.

“It’s chopping Bivens to pieces without yet overruling it, but I think that clearly is the direction they’re going in,” Russell said. She added that the new directives may make it impossible for plaintiffs to make a successful claim unless the case is more or less identical to Bivens.

“Everyone is impacted by the narrowing of the Bivens decision,” Russell told the Tracker, “but journalists certainly, when they are the victims of excessive use of force by a federal officer. There is an ancillary effect on the news that they’re trying to report.”

Russell said that Bivens provides one of the only paths for holding federal agents accountable for constitutional violations. While a federal law authorizes suits against state and local authorities, no such statute exists for federal officers. The laws that do pertain to filing lawsuits against federal employees explicitly exclude any claims involving constitutional violations.

The shortcomings and failings of other remedies

Other remedies — such as filing a complaint with the agency or seeking a preliminary or permanent injunction — have significant limitations or pitfalls.

Kelly Simon, ACLU of Oregon Legal Director, is one of the attorneys representing a collection of media plaintiffs in a lawsuit against the City of Portland, the U.S. Department of Homeland Security, U.S. Marshals Service and 60 federal and local law enforcement officers.

The class action suit was filed in May 2020, following hundreds of assaults and arrests of journalists in the city while covering social justice protests. That July, a judge granted a preliminary injunction barring both the Portland Police Bureau and federal officers from arresting, harming or impeding the work of journalists or legal observers of the protests.

Simon told the Tracker that while preliminary injunctions can provide temporary relief from ongoing violations, they can only be granted in instances where plaintiffs are able to show that future violations against them are likely.

The order in the ACLU’s suit was lifted in March 2022, when the court deemed it moot, Simon said. “When circumstances change and there’s no longer a need for it or a case is no longer live between plaintiffs and defendants, when there’s no live controversy, the court essentially says no relief is available.”

The case is still in its early stages, Simon said, and they remain open to reaching a settlement agreement that will include concrete policy changes.

“I still have hope that the United States government will be willing to come to the table and consider very reasonable protections for journalists and legal observers trying to ensure that there is transparency in government operations,” Simon said.

While individuals can file a complaint with the agency itself when federal officers violate their rights, Santa Clara law professor Russell told the Tracker she doesn’t see it as an effective remedy.

“An agency determination of a grievance is not the same as a court action,” Russell said, “and the people who decide that claim come from that world of law enforcement itself.”

Turning the spotlight to the legislature

In the majority decision, Justice Thomas acknowledged that agency review may not be an adequate remedy and noted that officers might be too fearful of personal liability if Bivens were expanded to include First Amendment violations. All of the justices agreed that the answer to both is the same: that the legislature must ultimately establish how to effectively address constitutional violations.

The outlook for such legislation remains grim. For example, the Justice in Policing Act passed by the House of Representatives in June 2020 abolishes legal protections for state law enforcement officers who violate constitutional rights but does not extend the same provision to their federal counterparts.

Simon, of the ACLU of Oregon, told the Tracker that while the path to holding federal officers accountable for constitutional violations has become steeper, efforts must be redirected to the local level.

“A lot of the constitutional violations that we see in this country are the product of state and local law enforcement action,” Simon said. “We should still be focused on doing everything we can at the local level to protect civil rights against abusive law enforcement practices.”