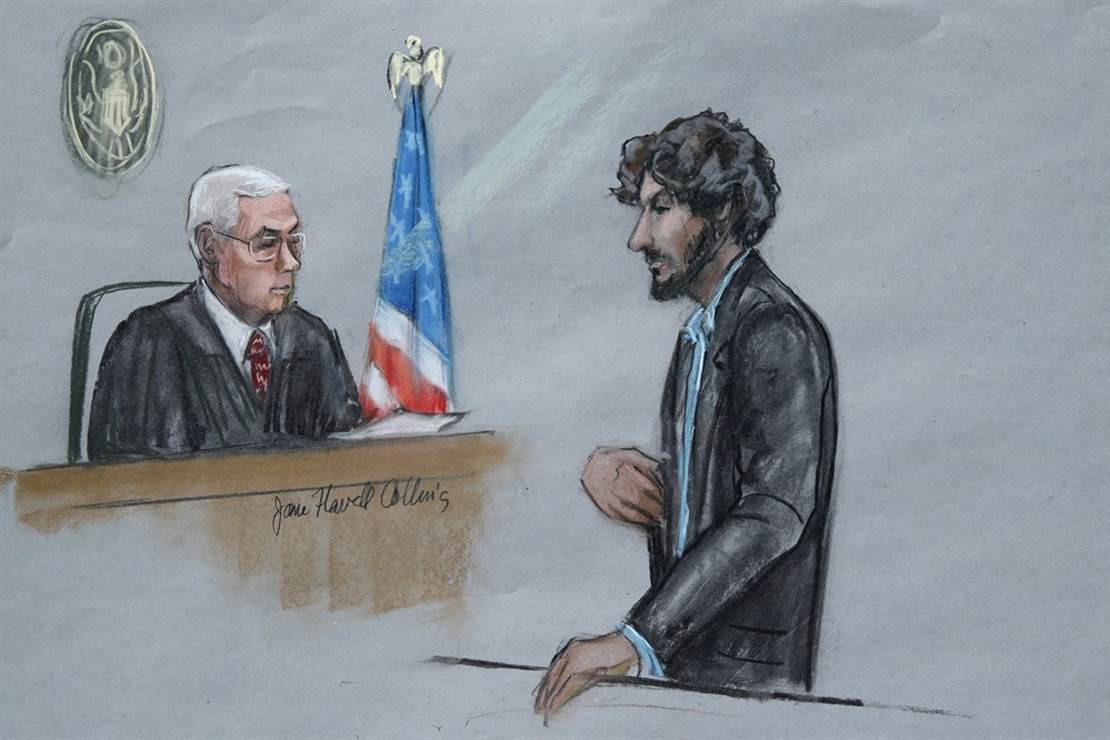 “The right to an ‘impartial’ jury,” writes Justice Clarence Thomas, “does not require ignorance.” In a 6-3 decision under Thomas’ controlling opinion, the Supreme Court threw out a decision by an appellate court overturning the death penalty of Dzhokhar Tsarnaev, the surviving Boston Marathon bomber who never denied his guilt.

The appellate court overturned the death sentence on the basis that the judge unfairly restricted one question from the voir dire questionnaire. It also ruled that the judge properly excluded hearsay testimony about Tamerlan Tsarnaev’s purported involvement in an earlier triple murder:

The Supreme Court on Friday reimposed the death sentence for Boston Marathon bomber Dzhokhar Tsarnaev, reversing a federal appeals court ruling that had voided it.

The 6-3 decision rejected defense claims that the judge at Tsarnaev’s 2015 trial improperly restricted the questioning of prospective jurors and was wrong to exclude evidence of a separate crime two years before the bombing. …

A three-judge panel of the U.S. Court of Appeals for the 1st Circuit ordered a new sentencing hearing, ruling unanimously that U.S. District Judge George O’Toole Jr. failed to allow enough questioning of potential jurors about how closely they followed extensive news coverage of the bombings.

The appeals court also said the judge should have allowed Tsarnaev’s lawyers to bring up a 2011 triple homicide in the Boston suburb of Waltham that investigators suspected was committed by Tamerlan Tsarnaev.

The point about the voir dire question is obvious; Tsarnaev’s attorneys want to argue that media coverage tainted the jury pool. The second issue goes to potential mitigation, as Tsarnaev’s defense wanted to argue (and did) that Dzhokhar was too controlled by his violent older brother to be fully responsible for his terrorism. That argument didn’t win at trial, and his attorneys now want a do-over to get hearsay testimony about Tamerlan’s involvement in the earlier triple homicide in front of a new jury.

Fat chance, Thomas writes. In the first place, Tsarnaev’s attorneys were allowed to ask questions about media bias in voir dire when answers to other questions suggested significant knowledge of the crime. Besides, the questionnaire did ask about media exposure in such a way to allow for those follow-ups:

The District Court summoned an expanded jury pool of 1,373 prospective jurors and used the 100- question juror form to cull that down to 256. The questionnaire asked prospective jurors what media sources they followed, how much they consumed, whether they had ever commented on the bombings in letters, calls, or online posts, and, most pointedly, whether any of that information had caused the prospective juror to form an opinion about Dzhokhar’s guilt or punishment. The court then subjected those 256 prospective jurors to three weeks of individualized voir dire in which the court and both parties had the opportunity to ask additional questions and probe for bias. Dzhokhar’s attorneys asked several prospective jurors what they had heard, read, or seen about the case in the media. The District Court also provided “ ‘emphatic and clear instructions on the sworn duty of each juror to decide the is-sues only on evidence presented in open court.’ ” Skilling, 561 U. S., at 388, n. 21 (quoting Nebraska Press Assn. v. Stuart, 427 U. S. 539, 564 (1976)). The court reminded the prospective jurors that they “must be able to decide the is-sues in the case based on the information or evidence that is presented in the course of the trial, not on information from any other sources,” App. 283, an instruction the court gave during voir dire and repeated during the trial. In sum, the court’s jury selection process was both eminently reasonable and wholly consistent with this Court’s precedents.

On the hearsay evidence of Tamerlan’s other criminal activities, Thomas writes that the district court exercised proper discretion in determining that it had “no probative value.” That’s because there simply isn’t enough evidence to present in court, Thomas ruled, suggesting that it was merely speculative:

Dzhokhar sought to divert the sentencing jury’s attention to a triple homicide that Tamer-lan allegedly committed years prior, though there was no allegation that Dzhokhar had any role in that crime. Nor was there any way to confirm or verify the relevant facts, since all of the parties involved were dead. As the District Court explained, “there simply [was] insufficient evidence to describe [any] participation Tamerlan may have had” or “tel[l] who played what role, if they played roles.” App. 650. The District Court did not abuse its discretion when finding that the evidence lacked probative value, would confuse the jury, and ultimately would be nothing more than “a waste of time.” …

Second, the dissent points out that district courts some-times allow the Government to present evidence of a capital defendant’s past bad acts during sentencing proceedings, despite the risk of evidentiary minitrials. See post, at 13–15. But many of those cases focused on the defendant’s own conduct, not someone else’s. See ibid. In such cases, the Government need only put on evidence tending to show that the defendant committed the past bad act. See, e.g., United States v. Umaña, 750 F. 3d 320, 348–349 (CA4 2014). Here, the evidentiary showing would be substantially more complex and confusing. No one alleges that Dzhokhar participated in the Waltham murders, and, as the District Court reasonably concluded, the evidence available sheds little light on what role (if any) Tamerlan actually played. See App. 650. To make his point at sentencing, then, Dzhokhar would first have to show, without any surviving witnesses, what role Tamerlan actually played. Then, he would have to establish that he learned of the Waltham crimes before planning the bombings. Finally, he would have to explain how his knowledge of Tamerlan’s role in a nearly 2-year-old violent robbery affected his own role in the bombings. Whatever other courts might think about an inquiry into a defendant’s own prior bad acts, this District Court reason-ably thought that the Waltham murder inquiry risked confusing the jury in these proceedings. We see no basis to disturb that conclusion.

Justice Stephen Breyer dissented on the basis that Dzhokhar had a right to present nearly any evidence in a sentencing hearing on the basis of mitigation potential. Even here, however, Breyer concedes that Dzhokhar still was able to make the argument of control by Tamerlan even without admitting a hearsay and unsupported allegation of Tamerlan’s involvement in the triple homicide:

Given Dzhokhar’s concession, his trial focused almost exclusively on sentencing, in particular whether Dzhokhar should receive the death penalty. Dzhokhar argued in mitigation that his conduct was less serious than Tamerlan’s and that Tamerlan’s radicalizing influence was a major reason that Dzhokhar participated in the bombings. See Sears v. Upton, 561 U. S. 945, 950 (2010) (per curiam) (older brother’s criminal record and introduction of defendant “to a life of crime” supported mitigation theory that defendant “may have desired to follow in the footsteps” of his older brother); Lockett, 438 U. S., at 608 (“defendant’s comparatively minor role in the offense” is relevant mitigating factor).

In support of this theory, the District Court allowed Dzhokhar to argue that: (1) Dzhokhar “acted under the influence of his older brother” Tamerlan; (2) Dzhokhar “would not have committed the crimes but for [his] older brother Tamerlan”; (3) Dzhokhar “was particularly susceptible to his older brother’s influence,” “[w]hether because of Tamer-lan’s age, size, aggressiveness, domineering personality, privileged status in the family, traditional authority as the eldest brother, or other reasons”; (4) Tamerlan “planned, led, and directed the Marathon bombing”; and (5) Tamerlan “became radicalized first, and then encouraged his younger brother to follow him.” The District Court also allowed Dzhokhar to introduce certain evidence in support of this mitigation theory. This included evidence that Tamerlan had behaved aggressively in the past, and that Dzhokhar looked up to Tamerlan. But the court did not allow Dzhokhar to introduce evidence of Tamerlan’s participation in the Waltham murders.

In fact, as Breyer notes, the jury considered the issue of reduced responsibility, and agreed with several points of Dzhokhar’s argument:

At the end of his sentencing proceeding, and without hearing any evidence about the Waltham murders, eight jurors found that Tamerlan had become radicalized before Dzhokhar and encouraged Dzhokhar to follow his example. Id., at 616. Three found that Tamerlan planned, led, and directed the bombings. Id., at 614. Three also found that Dzhokhar acted under Tamerlan’s influence, that he was particularly susceptible to Tamerlan’s influence, and that he would not have committed the bombings but for Tamerlan. Ibid.

In other words, even without the Waltham murders as evidence, the jury agreed that Tamerlan led the terror attack and that Dzhokhar probably wouldn’t have conducted them without his brother. And then the jury decided they didn’t give a rip about it:

The jury nonetheless unanimously recommended the death penalty for Dzhokhar in respect to those counts involving the bomb that he himself—and he alone—had placed. The District Court then sentenced Dzhokhar to death.

So what’s the problem? Tsarnaev’s defense *succeeded* in the arguments they made about Tamerlan, and it didn’t matter to the jury. Admitting hearsay and unsupported allegations about a triple homicide about which it was unclear Dzhokhar even knew about wouldn’t have made a difference. The jury agreed that Tamerlan influenced his brother and sentenced him to death anyway.

In other words, this is a waste of time over semantics and technicalities, not a question of justice. It’s time to move on and let actual justice prevail under the law.

Final question: Will Joe Biden, a death-penalty opponent, issue a commutation to Tsarnaev now that his appeals appear exhausted? Not before the midterms, one suspects, unless the execution order schedules the injection prior to the elections.