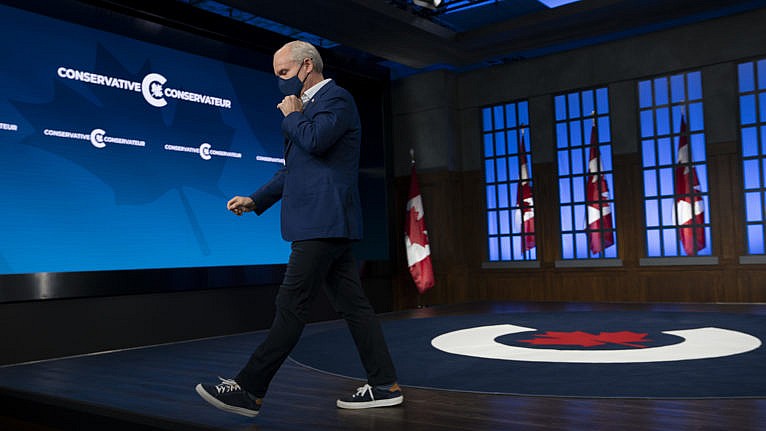 In the speech he gave Monday night, after his dreams were dashed, Erin O’Toole said that he would work to make sure “reconciliation is more than a box to check.”

“It is the very keystone of Canada reaching its potential. And it starts with clean drinking water as a basic human right, still denied to Indigenous children born today.”

It was one of the biggest applause lines of his speech.

There is now a consensus in Canada about this. During the campaign, Justin Trudeau had to eat dirt repeatedly when asked about his broken promise to deliver clean water to every First Nation in Canada. He will want to have a better answer next time.

It is Canada’s shame that many First Nation children still can’t drink from the tap—which the rest of us take for granted—but I believe something has changed over the last decade: we no longer ignore it.

Because of racism, for a long time we accepted a lower standard of living for Indigenous people as a fact of life, like the winter wind, something beyond our power to change. I believe that has changed. Increasingly sophisticated Indigenous leaders, fighting in the courts, in the media, with rail blockades and in election campaigns, have succeeded in convincing Canadians that the status quo is unacceptable, and although we can lament the slow pace of change, we should not pretend that it is not happening. It is.

I thought this election was a bad idea, but a number of things are clearer now that it is done. Everything is a bit sharper.

In governmental terms it may end up being, as Lisa Raitt put it on TV, a “$600-million cabinet shuffle,” but elections allow us to get a better read of what the public wants, much better than any public opinion poll, because people who normally prefer sports or reality TV force themselves to pay attention, listen to the arguments, sort priorities and mark an X.

The result makes it clear that Canadians want more of the same. It’s actually almost spooky how little change there was since the last election. The Conservatives picked up a little support in Atlantic Canada, lost a little in the West, the result of a reversion to what looks a lot like Progressive Conservatism. They took a few seats from the Liberals in rural areas, lost a few in the suburbs. The Green Party, consumed with an insane-looking leadership struggle, lost ground. The People’s Party won five per cent of the vote—likely a high-water mark for them—enough to damage the Tories but not win any seats of their own.

Otherwise, most people appear to have voted the way they voted last time. The non-prairie cities and suburbs like what the Liberals and NDP are offering and want more.

What is noteworthy, though, is that what they are offering this time is more left wing. If you set aside the narcissism of small differences, the Liberal and NDP platforms are more alike than in any past election. During the campaign, Jagmeet Singh delivered one relentless message—Trudeau is a fake who lets people down—likely because if he took the focus off the person, it would get harder to argue about policy, since the two parties are now so close.

READ: What Justin Trudeau’s Liberals have promised Canadians in their new mandate

This might be the most left wing government in Canada’s history, which may explain why the NDP, with its popular leader, failed to grow its vote.

The Liberals have finally given us a child-care plan, after deviously promising it and not delivering it for many elections. After years of inaction on climate, they have brought in a carbon tax and raised the targets. On reconciliation, they have passed the UN Declaration on the Rights of Indigenous Peoples, which looks to offer the best possible route for building a new relationship with First Nations, replacing the Indian Act bit by bit.

On inequality, they have already shifted the tax burden to higher earners, and have promised to take steps toward taking more from the wealthy, which is what Singh wants. (There is reason to think it may be easier said than done.)

On top of all this, the Liberals massively increased transfers to individuals with short-term pandemic measures that the Conservatives did not oppose with much gusto.

More than the policy goalposts that have been shifting to the left side of the field, it is the Conservatives’ nuanced responses that tells us something about the public mood.

Canada is steadily becoming more urban and more diverse—in American terms, we resemble the blue states. The immigration culture war that produces so much heat in U.S. discourse looks to be an electoral dead end in this country. There is no constituency tied to a military-industrial complex, no angry imperial ghosts.

Instead, we can observe a hardening consensus in favour of the nanny state, a slow and steady transformation into something like a northern European social democracy. Since those countries have the best standard of living in the world, the best health outcomes, the highest levels of gender equality, you can see why people might like it, especially diverse urban young people whose path to uncertain futures in the gig economy was interrupted by a global pandemic.

None of this is written in stone. The Conservatives could turn it around in one election, but you can see why O’Toole said Monday his party needs “the courage to change, because Canada has changed.”

Conservatives are at a crossroads. Their leader—who was elected as a “True blue” Tory—behaved like a red Tory, backing away from policy positions that many of his candidates wanted him to defend, without consulting them.

But they had better guard against the impulse to become a rearguard party, to retreat to policies that will appeal in the rural heartland and give up on the diverse, fast-growing suburbs where Canadian elections are won and lost.

Canada looks to be shifting to the left. O’Toole has tried to move his party with it. It didn’t quite work, but I don’t think he had any choice but to try.