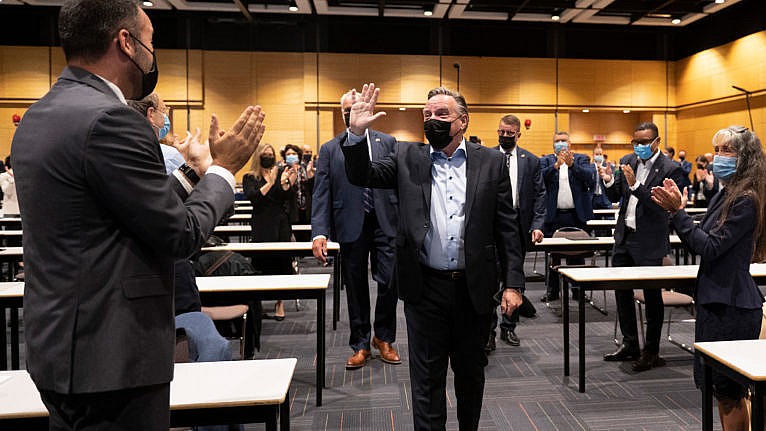 Justin Ling: Quebec voters didn’t listen to their very popular premier, who vaguely backed Erin O’Toole. In the end, no party got the breakthrough they wanted.

Quebec’s electoral map looks like a rorschach blob. Look at it one way, Premier Francois Legault’s impressive popularity has swayed the results and cemented his role as the voice of Quebec.

Look at it another way, Prime Minister Justin Trudeau remains a favourite son of Quebec, and the province remains committed to sticking with his progressive project—even if some of the shine has come off.

But cock your head a bit further and maybe Quebec is increasingly divided within itself, polarized on the increasingly nationalistic tone coming from Quebec City.

Squint, and you might even see the sprouts of an NDP rebirth in the province.

Where, exactly, Quebecers would go on election day has been a matter of some tea leaf reading in recent weeks, especially following Legault’s rather bombastic entry into the federal race—generally a rarity in Quebec politics.

“It’ll be easier for Quebec to negotiate new powers with Mr. O’Toole than with Mr. Trudeau,” Legault said in a press conference in September. “The nation of Quebec wants more autonomy, not less,” he went on.

But if O’Toole was supposed to rely on Quebec to help deliver that victory for the Conservative leader, he was left wanting on Monday night as the results rolled in. While his vote share improved, he is likely to add only two Quebecers to his caucus.

Legault’s boosting of O’Toole may simply not have been enough to overcome other serious shortcomings for the Conservatives in Quebec.

Part of Legault’s flirting with O’Toole may come from the fact that the Conservative Party of Quebec, which had previously been a fringe party, is now roaring to life thanks to controversial radio host and current leader Éric Duhaime. While the CAQ may be sitting just shy of 50 per cent in opinion surveys, the Conservatives are inching up towards 10 per cent—which could start to eat into Legault’s base in-and-around Quebec City.

Legault may have given a Cheshire smile when asked about who he would support, but he was fairly clear about who Quebecers should not vote for.

“There are three parties—The Liberal Party, the NDP, the Green Party—who want to give us less autonomy. I find that dangerous.”

Marc Miller, a close ally of Trudeau who represents downtown Montreal, told Maclean’s that it was “surprising to a lot of us to hear that kind of statement from the premier.”

Where things stand this evening, Quebecers didn’t exactly listen. The Liberals look set to elect around 35 MPs from Quebec—the exact same number the province returned to Ottawa in 2019. The NDP, meanwhile, have re-elected Alexandre Boulerice on the island of Montreal and may give him some company in popular former MP Ruth Ellen Brosseau.

Heritage Minister Steven Guilbeault, responsible for Trudeau’s plan to regulate Canadian content on the internet—controversial in the rest of Canada, popular in Quebec—is only narrowly holding on in Laurier—Sainte-Marie. The NDP is only a few paces behind him, perhaps representing an uncurrent of frustration that the one-time environmental activist is now part of a government responsible for purchasing a pipeline in Western Canada. Or, at least, that’s what an organized campaign to deface Guilbeault’s election signs would suggest.

Miller’s reflection on the results? “Ça va bien aller,” quoting a phrase that has become a slogan about making it through the pandemic.

Legault’s vague backing of O’Toole likely came down to some clever chess.

When Legault was asked whether he preferred a minority government, he took the opportunity to dance with O’Toole a little. “In the current context, given that no one party responds to all of our needs, I think I’m obligated to say that, for the nation of Quebec, that would be better.”

Nowhere on his lips was the Bloc Quebecois, although Yves-François Blanchet certainly took that as a sideways endorsement of his party. “It’s at least as much an invitation to consider the Bloc Quebecois as it is the Conservatives,” he said after the English language leaders debate.

But if that’s true, both Blanchet and Legault must be disappointed, as the Bloc are likely to shed a seat or two across the province. Indeed, Blanchet looked deflated, speaking to supporters after midnight, confessing that the results were “not what we wanted.”

The results are a clear sign that there are limits to Legault’s popularity. While Quebecers may broadly support his approach to the pandemic, that’s no guarantee his sky-high support will remain there.

More broadly, the results may suggest that Quebecers remain unimpressed with the mating ritual being displayed by the party leaders. It’s no secret that Quebecers are, probably more than anyone else in the country, concerned with the environment. Yet climate change was shunted aside on the campaign trail, often not surpassing platitudes and talking points.

Bill 21, yet again, played a central role in the debates in French media, yet the parties’ positions were nearly indistinguishable—the Liberals generally oppose the bill, but are refusing to fight it in any meaningful way; while the Bloc wants Ottawa to expressly swear off plans to fight the legislation. The other parties are shades in between. The last time a leader came out to expressly and emphatically oppose an attempt to forbid religious symbols in Quebec’s public service was Justin Trudeau, seeking his first mandate in 2015.

Legault pushed for significant new health transfers for Quebec, and O’Toole’s vow to boost transfers is part of what earned him the kind words from the premier, but no candidate went as far as the premier was demanding.

All told, Quebecers seem unswayed by all their political leaders. Perhaps it’s just a matter of whether anyone can break through that status quo next time.