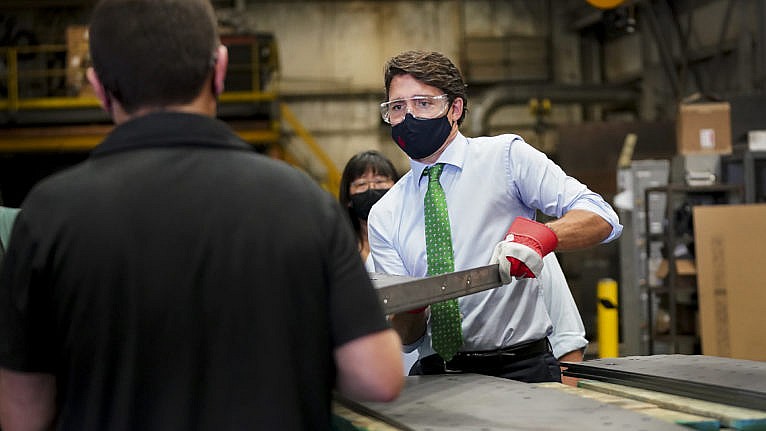 Oh, what an election to be a woman.

With just days left to go in this particularly joyless campaign, it’s worth taking a moment to appreciate how we—men, who still form a dominating majority in both the political and media classes—have managed to say a lot of nice things and live up to very few of them.

From the guy vying to remain as Prime Minister, who stood beside his man despite four allegations of misconduct, and who ditched him too late, only after a fifth woman came forward.

To the party leader who will never be prime minister, who was accused of sexual misconduct and who has skated through this election without ever having to respond to it.

Or the party leader who will likely not be prime minister, at least not this time, who had to fend off attacks from both her own party and the aforementioned leader who feels personally victimized by the term “systemic racism.”

In that vein, let’s consider the women of Quebec, who have once again found themselves talked about, but not spoken to, in a debate over their rights.

Throughout this campaign, when issues facing women were raised, they were more often not a cudgel for The Feminist Prime Minister™ to assail his allegedly un-woke competitor.

All told, this election should be pretty clear evidence that for all the gains towards actual gender equality this country has made—boy, do we ever have a way to go.

We learned in recent weeks, thanks to the CBC’s Ashley Burke and The Record’s Luisa D’Amato, that Kitchener Centre MP Raj Saini was the subject of accusations from four different women. They accused him of unwanted touching, workplace bullying, and sexual advances at a Parliament Hill Christmas party.

And yet, faced with these allegations on the campaign trail, the Liberal Party said, in three of the cases, it had “no record or knowledge of the matter,” according to the CBC. The fourth, Trudeau himself said, was investigated under a “rigorous process.”

But under that process, the woman who filed the allegation says she wasn’t interviewed.

Conservative candidate Melissa Lantsman said it was just another example of Trudeau “covering up the misconduct of his candidates.” NDP candidate Lindsay Mathyssen echoed Tammy Wynette: “Justin Trudeau did what he has done so many times before — he stood by his man.”

Apparently five is the magic number, because when another woman came forward—making an unspecific allegation—Saini was un-endorsed by the Liberal Party.

Saini’s name will remain on the ballot as the Liberal candidate for Kitchener-Centre, however. Which is rather insulting to the women who are still, technically, running against the man.

“For a lot of people on my team, that week [before Saini dropped out] was really, really difficult,” says Beisan Zubi, NDP candidate for Kitchener-Centre. (Full disclosure: Zubi is a longtime friend, having met while she was a Parliament Hill staffer and I was in the Parliamentary Press Gallery.)

Politics can be unwelcoming for female candidates anyway: Unwanted comments, creepy invitations while door-knocking, constant comments on your appearance.

But to have to run against that bad behaviour is another thing.

“It got better once he dropped out,” Zubi admits. (Conservative Mary Henein Thorn is also running for the seat. The Conservative Party did not respond to my media request to speak with or get a statement from her.)

It’s particularly galling for Zubi, who wrote a scathing piece in 2017 entitled: “Here’s why I never reported sexual harassment while working on Parliament Hill.” She was even asked to testify before a House of Commons committee about Trudeau’s plan for a new process to handle complaints in Parliament.

“I’d hazard a guess that it doesn’t do very much to protect people in many of these situations,” Zubi told the committee. “In fact, the onus to report is on the victim. They have to work within their own party infrastructure and go to the whips.”

That sums up the farce of the Saini investigation rather well.

“They built the process so that it wouldn’t be welcoming to victims,” Zubi told me this week. Watching Trudeau defend that process, and Saini, was “so obtuse,” she said. “It was exactly the opposite of what he’d said he’d do.”

Trudeau also stood by Marwan Tabbara, who faced sexual misconduct allegations and was approved to run in 2019 regardless. (Tabbara was arrested in 2020 and now faces charges of assault and criminal harassment.) He stood by Kent Hehr, who faced multiple allegations of inappropriate sexual behaviour. And this comes off months of allegations that Trudeau and his cabinet are woefully mishandling a culture of harassment in the military.

There was a curious moment during the TVA debate, earlier in September.

During a debate about sexual harassment in the Canadian Armed Forces, and the broader #MeToo movement, moderator Pierre Bruneau asked Bloc Quebecois leader Yves-François Blanchet if the “parallel system of justice” arising from social media was cause for concern.

In an otherwise encouraging series of answers—we need to promote clarity and accommodation for women who experience harassment and assault, he said, particularly in the justice system—he made a strange aside.

Women not having a “feeling of clarity” in the justice system has led to “a form of retribution that’s happening, primarily on social media which can do, believe me, real damage to one’s personal life.”

After the debate I asked Blanchet: What did you mean, believe me?

He didn’t answer it directly, but then again I already knew the answer: Blanchet faced accusations of sexual assault last year on an anonymous Facebook page, amid of a wave of allegations against powerful men and women in Quebec. The anonymous woman said that Blanchet offered her cocaine, then groped and kissed her even as she objected.

But it wasn’t just one anonymous post: The woman spoke to the Montreal Gazette and repeated the allegations, providing details of the night to reporter Christopher Curtis. Blanchet “unequivocally” denied the allegations, challenged the woman to file a police complaint, and said he would cease commenting on the story altogether. And he did.

The story has nary been heard since.

This week, Global News’ Neetu Garcha sat down with Trudeau to talk about a range of subjects.

Trudeau answered as expected. Straight to highlighting his team. To the childcare plan that he has made central to his campaign. To suggest that Erin O’Toole presents a threat to their right to choose.

Yet when Garcha asked Trudeau four times whether Quebec’s Bill 21, which forbids religious minorities from wearing identifying symbols at work, was “discriminatory,” Trudeau was in less comfortable territory. Four times, he refused to use the word.

Galling, as the Superior Court of Quebec was quite clear on the effects of the law. “There is no doubt in this case that the negation, by Law 21, of the rights guaranteed by the Charter has severe consequences on the affected persons.”

Not only are state employees “ostracized,” the court found, “what’s more, some will see their dreams made impossible and others will be stuck in their roles without the possibility of advancing or moving.”

The scathing decision continues: “Law 21 sends the message to students that minorities who wear religious symbols occupy a different place in society.”

In Trudeau’s defence, and as he rightly pointed out, he’s the only party leader who is open to challenging the law in court. That’s tragic in its own right. Yet Trudeau, Blanchet and O’Toole all lined up to admonish the debate for daring to call a discriminatory law discriminatory.

Yet when Shachi Kurl dared use that word, “discriminatory,” on stage and at the English language leaders’ debate: She was vilified.

Blanchet called Kurl’s question a “flurry of insults” wherein Quebecers were called “racists and xenophobes.” On Wednesday, both Trudeau and O’Toole demanded the debate broadcasters apologize for daring to insult the law, and the fragile ego of Premier Francois Legault.

After the debate, the Bloc leader explained that the mean woman asking about the law that Quebec’s own court system says is discriminatory (but legal, only due to the notwithstanding clause) is evidence that they require a man like Blanchet. “If Quebecers needed a guard dog before, they’re dangerously in need now.”

Kurl wasn’t the only woman to catch Blanchet’s ire. He similarly lashed out at Paul for her insistence that the Bloc leader recognize the realities of systemic racism in Canada and Quebec. Paul hasn’t had a great election anyway—she was nearly ousted from her party, less than a year after being elected by the membership.

After the debate I asked Paul, to paraphrase myself: Didn’t that suck?

“I simply made the point that if he is interested in learning more about the experience of people like myself or those who have said very clearly that systemic discrimination exists,” Paul began, noting that ‘systemic’ pretty much means it’s much bigger than the nation of Quebec: “I again extend my hand in friendship and understanding toward him.”

All the men running should have to explain their unconscionable position to Amrit Kaur, the Sikh woman challenging the law: The woman who had to pick up her life and move from Quebec to British Columbia in order to do her job. To teach.

“That feeling of racism, being disenfranchised, you can hear about it, but when you feel it on yourself, there’s a sadness you can’t describe,” she told my colleague Stephen Maher in 2019. “That feeling, I don’t wish it on anyone.”

For years, we have had a bunch of male leaders who insist that achieving the goals of feminism is, at least in part, a man’s job.

And perhaps we need to find some new applicants for that job.

The House of Commons is only 30 per cent female. According to Equal Voice, only 43 percent of candidates are women or gender diverse—up just a single point from 2019.

Of the major parties, only the NDP is running more female candidates than men—the other parties are, like they’ve done for more than a century, running more men than women.

A welcome change, however, are a handful of transgender and non-binary candidates running. Conservative Hannah Hudson is running in Victoria. Green Nicki Ward is running in York South — Weston.

But it seems all but certain Parliament will look the same as when the MPs left it this summer: Overwhelmingly male, and uniformly cisgender.